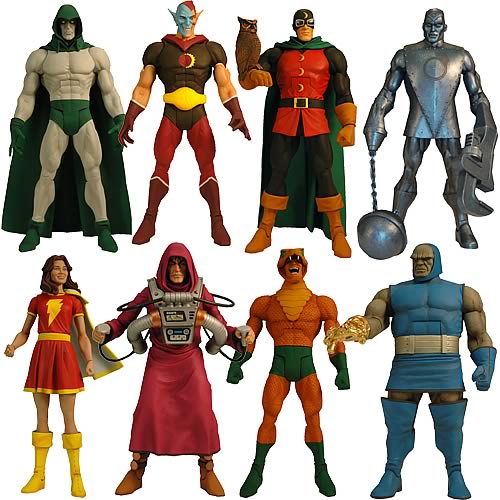 ?
Answer: So evil he made himself the Build-a-figure in Wave 12 of Mattel’s DC Universe action figure series. Seriously, Mattel? You’ll make Copperhead and Eclipso and Iron (?) regular figures, but you’ll force people to buy all 8 different figures if they want to own one of the biggest and best known villains in the DC Universe? That’s fucking twisted, guys.

Look, I’m sure Mary Marvel and the Spectre and maybe Dessad will be popular (I don’t know who Desaad is, but he appears to be an evil monk with a jetpack, which is fine by me) but not a single person in this line would be more popular than Darkseid. That would be like making Wonder Woman the Build-a-Figure — or Lex Luthor. That’s just not cool. Not cool to the fans or kids, because out these eight figures, Darkseid is very possibly the only DC character they might have heard of. But I guess little Timmy will have to hunt down and buy all seven figures — including Iron (?) — if he wants to play with Darkseid.