Batman’s ultimate adversary has a twisted — wait, the most twisted — criminal history in the DCU, a history loaded with crimes, pranks, bitch slaps and, to borrow some unfortunate 1940s slang, more than a few boners. But when the Joker really does best, what he excels at more than anything, is simple, cold-blooded murder. Even Zsasz — who is a serial killer determined to kill as many people as possible — has nothing on the Joker in terms of the deaths he’s inflicted, both on Gotham in general and the Bat-family in specific. So take a break from that new Batman game (your PS3 is probably burning anyways) and take a walk down the blood-spattered memory lane of Joker’s craziest killings, and remember why he’s not just the Dark Knight’s biggest foe, but the greatest villain in all of comics.

?
Yes, Jason Todd is a whiny teenage turd as Robin, so the Joker kills him in Ethiopia, thanks to bloodthirsty Batman fans. They voted in favor of Todd’s death, so the ass whipping here isn’t a shocker.
But it’s still surreal, isn’t it? Joker mangles Robin with a crowbar, leaving him for dead in a building rigged with explosives. It’s a death in the family that haunts Batman, and one that turns Jason Todd into the a-hole he is today. (Batman #427-8)

?
The Joker has the audacity to smash the brains of a villainous cohort in the presence of Mr. Freeze, Clayface and other inflamed rogues. It’s an absolute bloodbath. Psimon, a boring orator, was asking for a death wish anyway. (Salvation Run #2)

8) A Significant Portion of Gotham

7) The Nation of China 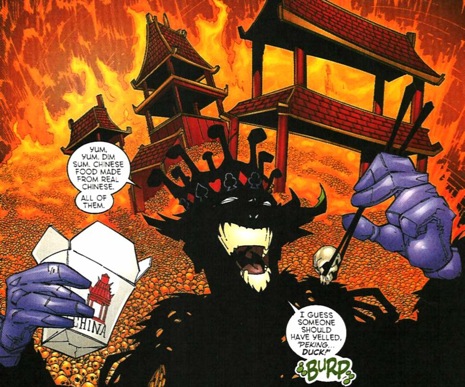 ?
Reigning as Emperor Joker, the Clown kills Batman several times. Big surprise. But the most ridiculous yet comical moment of the storyarc takes place on one page: Joker devours China, a country reduced to Dim Sum in a to-go box. Of course, he doesn’t make an entr?e out of Batman – that would be too easy. (Emperor Joker #1) 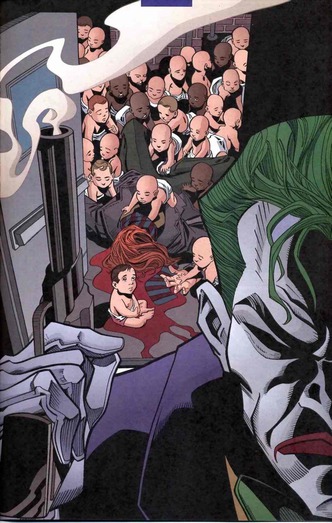 ?
Poor Sarah Essen, an amateur in No Man’s Land. She confronts the Joker in Commissioner Gordon’s office, which is crawling with babies. Dumb move: The Clown shoots her when she has no choice but to catch one. The babies crawl on the corpse, and one even sits aloof in the pool of blood flowing from her skull. Merry Christmas, Commish! (Detective Comics #741)

Edited for youngsters or not, the Joker falls to his own insane mastery – specifically, the brainwashed and Joker-ized Tim Drake – in Batman Beyond: Return of The Joker. In the kid-friendly version, Joker slips on water and live wires; in the unrated one, he takes a metal rod to the chest from the traumatized Time. If you like blood, watch the latter. 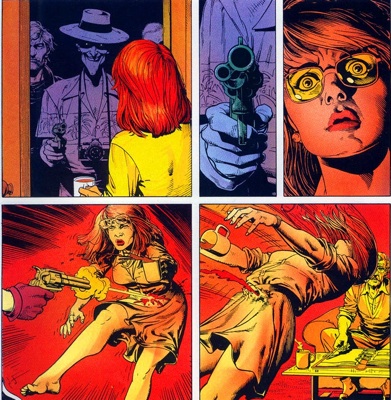 ?
The debate concerning whether the Joker raped Barbara Gordon when photographing her naked body is still burning. Barbara doesn’t die in The Killing Joke, obviously, but a Batgirl does. Why hasn’t DC given her new legs yet? You know Stephanie Brown can’t handle the mantle for long. (Batman: The Killing Joke)

?
What a sucker. The alternate-world Luthor contributed to a major crisis, in which Superboy dies, Jason Todd returns and JLA Watchtower crumbles. But Lex Luthor and the Joker corner him in a dark alley mostly because he’s screwing around on their own evil turf. The assault starts with face-melting acid, moves to an electric joybuzzer and ends with a shotgun blast for good measure. Hell yeah – consider this the Joker’s antihero moment. (Infinite Crisis #7)

“I’m gonna make this pencil disappear.” Ta-da! The Joker jams a pencil in a henchman’s eye. Fucking outstanding execution. It’s martial artistry. His magic trick is so concise, so impressive, it doesn’t petrify the surrounding thugs. Instead, they listen. 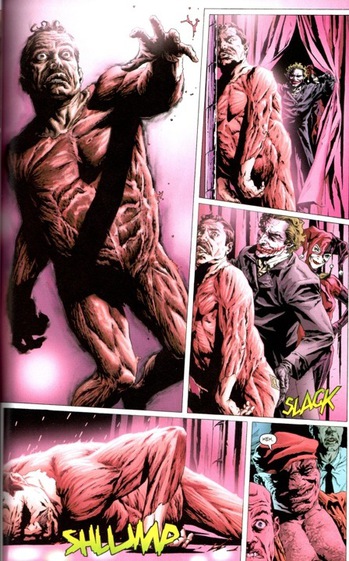 ?
Fresh out of Arkham Asylum and thirsty for chaos, the Joker walks into a club filled with thugs, booze, drugs and busty women. Oh, and Monty, whose little respect for the recovering supervillain screws him.

And so the Joker skins him alive … and throws him on stage. And then the night’s entertainment has truly begun. (Joker)