Menu
Home
>
Merchandise
>
I Think I Have to Start Smoking 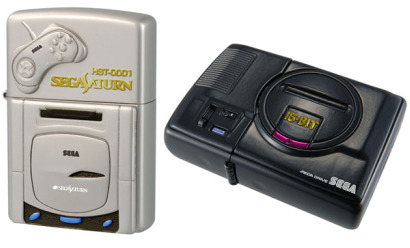 ?
Look at these things! They’re Zippo lighters made to look like the Sega Genesis and Saturn, respectively, and they are so incredibly awesome that coughing and public ostracization and that horrible smell in your clothes and lung cancer might be worth it. Of course, the Zippos are also $155 each, so that might be a dealbreaker for some people. Oh! I know! I’ll buy the Zippo, and  become an arsonist! Then I wouldn’t have any of the health problems, and it’s more socially acceptable, too! Problem solved! You can pre-order these here, although I’d bet $155 bucks that after these Sega Zippos sell out, Zippo partners with Nintendo and Sony for more flaming consoles. Just sayin’. (Via Great White Snark)