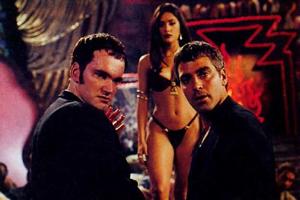 The wussification of vampires has been a long time coming, but the trend has reached its apex with the execrable Twilight series, which has all but sucked the life out the vampire genre. And unfortunately, many of us nerds lucky enough to have girlfriends will have to suffer through another installment of it all too soon, unless we’re doubly lucky enough to have a nerd girlfriend who’s immune to Twilight’s emo charms (nerd girls, we doubt you have this problem). To steel yourself for the challenge, or just wash the away the taste after the experience, here are 10 vampire movies that don’t suck. These are quality films starring horror’s favorite bloodsuckers that are full of action, adventure, explosions, and pure brutality — and absolutely no sparkling.

There’s nothing wrong with a vampire movie aimed at teens – The Lost Boys proved that. Not only is the greatest moment in the Coreys’ (Feldman and Haim) history, it’s also a damn fine vampire tale. Sure, it incorporates the fussy, “seductive” elements of vampirism that have been so horrifically distorted in modern vampdom, but it doesn’t forget to make the vamps brutal bastards, too. Also, it has that maggot eating scene. You won’t see that in Twilight.

Despite being a TV movie from the ’70s, Salem’s Lot is still a lot better than most of the vampire movies that followed it (not to mention most of Stephen King’s other film adaptations). And these vampires are ugly, nasty, scary-ass things – not the kind of fey creatures teenage girls might swoon over so much as the kind of thing that gave every kid that saw this on TV nightmares for months afterwards (yeah, I was one of those kids). Still surprisingly good and scary after all this time, it’s proof positive that vampires on TV don’t have to be in a soap opera.

Okay, this movie has a tiny bit of emo prevarication on the part of one new vampire that might remind you slightly of Twilight‘s whiny, sad-bastard vamps – but the action more than makes up for it. It stars Lance Henriksen and Bill Paxton as Civil War era bloodsuckers-cum-modern day bikers who drive around the South in a tricked out vampire RV preying on shitkickers and hayseeds. And it has a bad-ass bar brawl that turns into a slaughter in which a dude’s throat gets cut by a spur. Also, when these vampires are exposed to sunlight, they don’t sparkle, they burst into flames.

The ’80s produced some excellent horror comedies, such as this one. The best part about them is, despite incorporating some laughs, they didn’t skimp on the horror part. Fright Night is the tale of a horror movie fan who has a vampire movie in next door. After watching his new neighbor dispose of a dead hooker or two, he tries to alert the authorities, his friends and a washed up vampire hunter from the movies, only to be ridiculed by all of them – until it’s almost too late. Great makeup and a clever story really elevate this to classic status.

Blade is a superhero/vampire film that doesn’t stick to the conventions of either superhero or vampire films; it just delivers the awesome all the way through. Wesley Snipes is a sneering badass as the main character and Kris Kristofferson is great as his human trainer/gadget master Wheeler. And even though he can walk in daylight (he’s a vampire/human hybrid, see) walks in the daylight, he never sparkles — he just keeps kicking ass, same as at night. The sequel, directed by Guillermo del Toro, is pretty damn good too, but not so much on number three.

5) From Dusk Till Dawn

Robert Rodriguez and Quentin Tarentino’s first collaboration gives us some real bloodsucking fiends. Two badass killers and thieves run into a whole mess of vampires in a Mexican border town. And all hell breaks loose. These vamps were ugly as sin, mean as the devil himself and absolutely brutal. It’s an action-filled, explosion-riddled monster of a monster movie that easily out-Grindhouses their later Grindhouse double feature. And it has an strikingly non-wussy cameo from Cheech Marin.

This recent Swedish favorite is a coming of age tale about facing up to bullies folded into a clever vampire story. It’s less of a brutal action movie than a deep, well-acted, thinking man’s vampire drama, but it’s also one of the best vampire movies ever made, and the mysterious young female(?) vampire does her share of brutally graphic bloodsucking. Don’t wait for the impending Hollywood remake – they’re sure to screw it up and reading subtitles isn’t that hard, you lazy bastards.

In this film a group of ancient vampires come to an Alaskan town about to undergo a 30-day spell of darkness. They do not use this time to seduce all of the teenage girls in town. No, it’s more of an all you can eat buffet kind of deal. Oh, and before they commence the snacking, they conspire to make sure no one can escape or call for help. Those are some bad ass vampires, indeed.

George Romero is better known for his canonical zombie tales, but this unusual take on vampires is arguably one of his best films. Martin, the titular sucker, lacks fangs and has to use drugs to incapacitate his victims and razor to get at their blood. Less action or horror and more psychological thriller, it’s a weird, arty deconstruction of the vampire myth that makes the vampire look about as appealing as your average serial killer.

This is not just the original vampire movie – it’s arguably the original horror movie. And it will still give you the willies today. This thing isn’t sexy – unless you think a walking corpse with dead, soulless eyes and claw-like hands is sexy (which some of you probably do. Could there be Nosferatu fan fic out there? Dare I even ask?). If you’d like a more modern take, the famed Werner Herzog remade it in 1979 and then John Malkovich and Willem Dafoe did a warped take on it in 2000’s Shadow of the Vampire – they’re all incredible in their own way.