Some might argue that the only edition of Monopoly that needed to be made was was the original Monopoly. If you’re Hasbro, or USAopoly, you might argue that there need to be as many editions of Monopoly as there are grains of sand on every beach on the goddamn planet. The world is practically littered with Monopoly editions now, not being able to go four feet without bumping into a game board. Here now we look at a mere 22 of these editions that did not need to be made for any reason.

?
For those five of you who hated Harry Potter because it was too full of witchcraft, here’s the Judeo-Christian fantasy movie Monopoly tie-in for you. After all, what better exemplifies the teaches of Jesus than to exchange money and crush your enemies? There is, however, a very, very slight chance you might sit around the board for two hours and have fun, which is more than can be said about watching the Narnia movies. 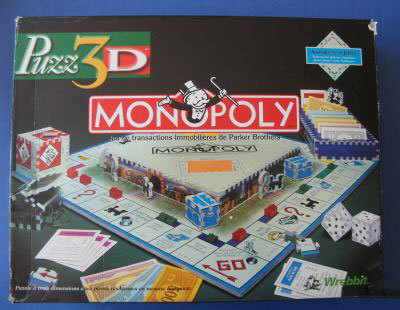 ?
For those who want to have the longest set-up process for Monopoly ever, where you have to solve a 3D puzzle to build the board before you can even play. Can I also build a 3D noose to hang myself with before I die of boredom? 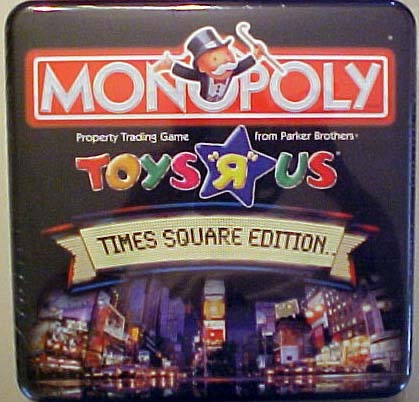 ?
The Toys “R” Us in Times Square has some neat things, like giant Lego sculptures and a Ferris Wheel, and an escalator, but it is still just a Toys “R” Us. I would think that if you are really a fan of Toys “R “Us, you are not buying this and saving your money for another exclusive Star Wars toy that you will definitely not get at the Toys “R “Us in Times Square because the sales tax is too high, and you certainly can’t drive around Manhattan to another store if that one does not have it.

?
Ah, just the thing for the elderly aunt who also collects small dogs! You’ve got so much Betty Boop on one board, it’s Booptacular! It’s Booprageous! It’s going to make you ill. If you ever thought Betty Boop was a sex symbol (despite her grotesquely deformed head) you’ll really love it to buy and sell various copies of her, just like a mad cloning scientist sex slave trader! Boop Goes the Dynamite!

?
Candy is supposed to be eaten. Board game pieces are not. Merging the two not only encourages a choking hazard, but it also creates a combination of two things that do not need to be combined. If you have a bunch of chocolate, you want someone to say “Here, have some chocolate,” not “Here is some chocolate you can’t have right away, you have to play a board game with it.” I realize that they’ve changed the rules so that it’s a quicker game Monopoly to eat the chocolate faster, but why not just skip the game or eat the damn chocolate? Or you can use other pieces instead of the chocolate to play the game, but then why didn’t just buy a regular copy of Monopoly and a damn Hershey bar?

?
It is a game where instead of properties, you buy and sell “I Love Lucy” episodes. Unfortunately they must not be worth that much in real life if something like this had to be licensed. 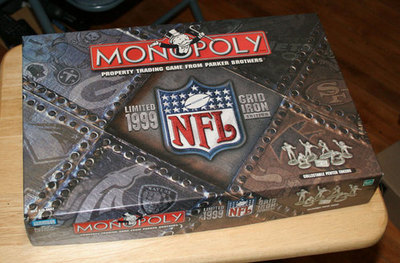 ?
A Monopoly game, not just centered around football, but one specificseason of football in a limited collector’s edition? Well, good thing it was a limited run, as I can’t see any fan of football buying this except for maybe the one rabid Broncos fan.

?
Did you ever wish your Monopoly board could be less stable? Well look no further than this edition of Monopoly whose inflatable board can be bumped and jostled with the slightest movement, sending game pieces flying. Oh, and you have to inflate the board. Whee! 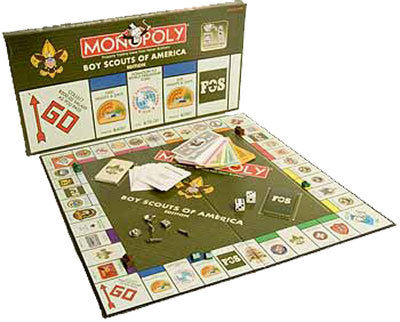 ?
There’s nothing more representative of an organization dedicated to the great outdoors than a game about real estate. Scout law includes “thrifty” as a virtue, along with “loyal, helpful, friendly, courteous, kind, obedient, cheerful, brave, clean and reverent” all things that a game of vicious real estate trading embodies! What None. Also, what Boy Scout hasn’t wanted to sit down in their tent and play a rousing board game with a lot of easy-to-lose pieces? 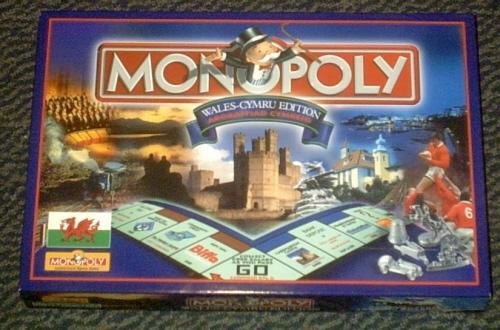 ?
Wales is a location that most Americans cannot find on a map. Coincidentally, Welsh is a language that most humans cannot speak with a mouth. It looks a lot like what happens when people are frustrated with their computer and just quickly run their fingers across the keyboard. You’ll have a lot of fun with this game wondering if you are reading Welsh or suffering from a learning disorder.

?
While you can’t possibly afford to buy stocks of Berkshire Hathaway, you can at least buy the Monopoly game based off the giant conglomerate holding company. It will at least make you feel like a billionaire until you can no longer see the board because your electric bill hasn’t been paid, having been laid off seven months ago. 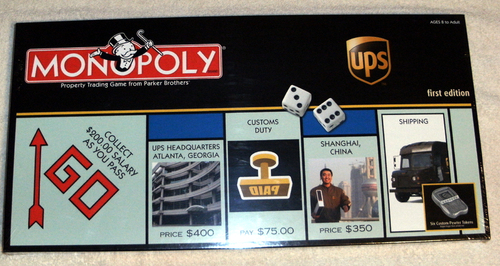 ?
Based on the shipping company, this edition boasts such properties as “UPS Headquarters” and game tokens such as “UPS Shipping Box.” Be still my beating heart, the excitement is too much to bear! Question: If a FedEx employee delivers this game to your house, does the world end? Shouldn’t it?

?
Finally, the edition that allows you to wheel and deal dogs, just like Michael Vick! Well, no not exactly, as they don’t allow you to have the dogs fight, you just build hotels on them. Also, every dog is adorably cute and shot up close with a fish-eye lens so they look like they’re about come right up to your face and lick you with a tongue that was so almost certainly licking the other dogs’ asses.

?
Wow. Bass fishing. I mean, shit, why not just make a Monopoly game after watching your grandfather get a colonoscopy? I’m sure that there are a lot of people interested in bass fishing in this country and I don’t want to talk to any of these people. Further, I don’t want to play a game of monopoly where instead of wheeling and dealing properties, I’m buying lakes and bass. What piece should I be? Should I be the hat, the tacklebox, or the gun I’m going to put in my mouth and shoot myself with? Hmm. Maybe I’ll just slit my wrist with the bass-fishing themed money.

?
I don’t think I want to meet the person who has this game and actually wants to engage in the mock selling and trading of horse breeds, especially when the goal is to get a monopoly on horses. I can just imagine someone winning this, holding the property cards close to their crazed eyes and shouting “I got all the horses!” I think this edition could be improved significantly if they added the word “Pizza” to the end of “Horse Lover’s,” especially if they sold it in Quebec.

?
This edition mixes the fast-paced world of real estate trading set in a place where the government pays you to live there because it’s so undesirable! Even the hotels and houses look frozen over with nothing left but the rescue teams to count the bodies. Ah, but this isn’t about Alaska, it’s about the Iditarod, which sounds like a piece of home workout equipment sold on cable late at night. Too bad it’s about dog sledding, which ranks right up there with cheese-making on the list of Things That Nobody Gives A Damn About. 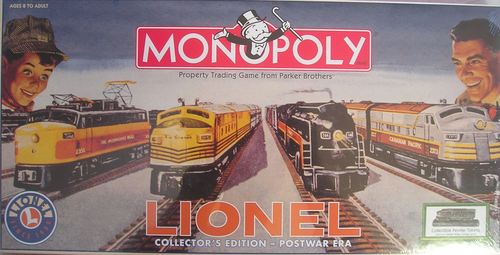 ?
Well, here’s something that mixes the exciting act of going around a Monopoly board with the exciting act of trains going in a circle. Here’s a Monopoly product that’s really aiming for a very specific niche. In fact, it’s such a specific niche it’s almost like the head of Hasbro said “I really love Lionel trains, but only of the post-war era, so we’re going to make a Monopoly set.” To which someone else said “There isn’t a market for that, we’re going to lose a lot of money.” To which the head of Hasbro said “You’re fired.” 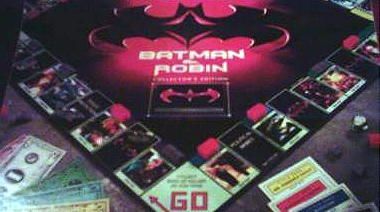 ?
Were you aware that they even made a Monopoly edition of this wretched movie? If so, you weren’t paying attention in 1997, when they marketed the hell out of this giant turd from movie hell. Apparently you can buy things like the “Ice Cream Factory” instead of the usual utilities, which is kind of like having to look at close-ups of superhero suits with nipples instead of watching a film that had some sort of human decency. 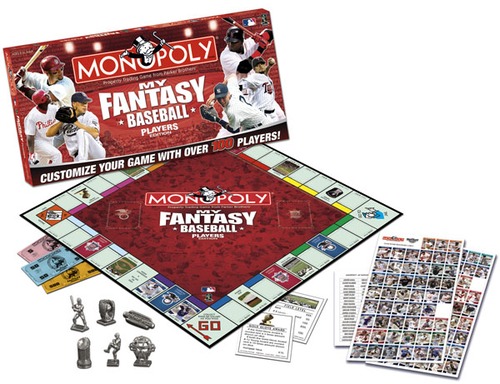 ?
So, you know, you’re not content to spend all your free time wasted managing a completely fictional baseball team. Lucky, lucky for you that there’s a way you can have your fantasy life extend into Family Game Night. Won’t they be so happy when they find daddy has taken the game of Monopoly and turned it into an extension of his cruel, cruel obsession that already robs them of the love and attention they so desperately crave. Who wants to buy properties when you can buy meaningless athletes, custom picked by your father like a mortician picks out eyeballs? Of course, there are those who might by this game, with no family or friends they can play with, playing the game to themselves, obsessively looking over the properties like a serial killer looks over high school yearbooks. 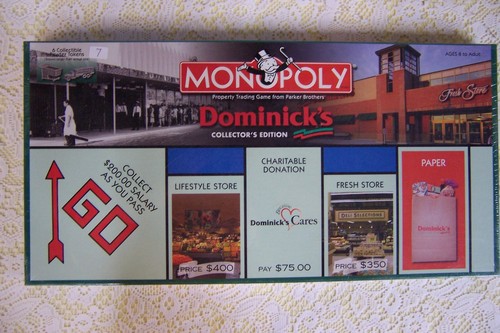 ?
For those of you in parts of the country that may not have a Dominick’s (which would be most places that are not Chicago) it is a grocery store. Therefore, you have a Monopoly edition where you go around the board trying to purchase various sections of a grocery store which sounds as exciting as you can imagine it to be. “A ha! I have purchased the photo department! Trade you for the cake department!” This was also a limited collector’s edition, so good luck purchasing it for the millions of dollars it must be worth now.

?
Around about the year 2000, Internet companies were huge. Then, someone said “Wait, do any of these companies actually make money?” When the answer was no, everything collapsed. Riding the wave of delusion was this edition of Monopoly, which focuses on the wheeling and dealing of .Com companies. For accuracy’s sake, the prices themselves are overinflated. For example, would you want to purchase Worldcom for $200 million? You can! I mean, it only filed one of the largest bankruptcies in history in 2002, but man, in this game you can own it! You also spend hundreds of millions of dollars and also own, Lycos, Altavista, Geocities and ha ha ha ha ha ha ha. At least you can feel good looking at Mr. Monopoly having a freak-out because his Internet connection is down and presumably can’t look at nude young Japanese girls.