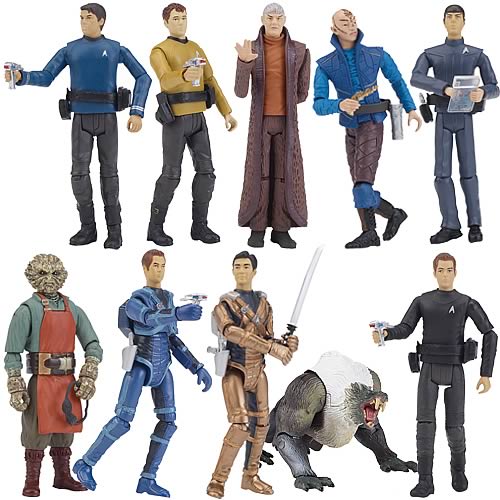 ?
So do you think there’s an alternate reality where Playmates’ mediocre Star Trek movie toys are selling like hotcakes? There must be, because in this world, they’ve tanked hard. I’m assuming that of the people who did buy the figures, a few must be Topless Robot readers, which is why I thought I’d mention that the second series of the 3 3/4-inch figures are now going to be an Entertainment Earth exclusive (and some other company who hasn’t been announced yet, but whatever). As you can see, the series includes the above 10 figures, and is your only way to complete the new movie crew in that scale and/or that build-an-Enterprise-deck that started with the first series of toys. EE has the set for $69, or basically $7 a figure — a tad on the expensive side, until you remember that these probably wouldn’t come out at all if not at this price point. You can pre-order ’em here.