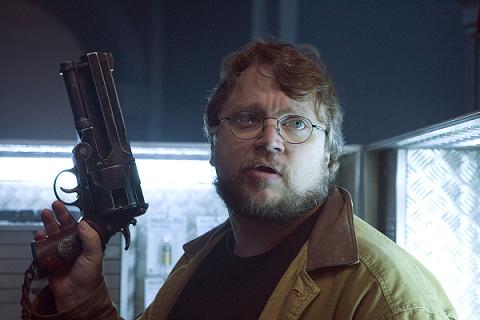 As production on The Hobbit, um, hobbles forward, small details about the film are beginning to emerge. Ian McKellan’s participation is locked in and Andy Serkis will almost certainly be returning to play Gollum. Currently, fanboy speculation is running wild that Ron Perlman will reunite with his Hellboy collaborator Guillermo Del Toro to give voice to Smaug the dragon. But will the cherubic director be casting himself in the film as a monster as well as overseeing the action? He recently stated that he would be doing so in a German television interview in which he appeared to promote his new vampire tome The Strain: Book One of The Strain Trilogy. He isn’t revealing if he will throw on a costume to play Smaug, the Great Goblin, a Warg or a new creation, but whatever monster he embodies you can bet that it will be unique, nightmarish and completely fucked up…in the best possible way. (Via Vulture). ? C.C.

Chris Cummins is a pop culture writer and Archie comics historian who has contributed to The Robot's Voice, Den of Geek US, Philebrity, Geekadelphia, Uproxx, and Unicorn Booty. He is the co-producer and co-host of Nerd Nite Philadelphia, and is regularly involved in producing and hosting New York Super Week events. In 2014, Chris began Sci-Fi Explosion, a mix of live performance, trivia and funny clips celebrating the weirdest in science fiction that regularly travels around the United States. He wrote the introductions to the compilations Archie's Favorite Comics From The Vault and (with Paul Castiglia) Archie's Favorite High School Stories. You can find Chris on Twitter at @bionicbigfoot and @scifiexplosion.