What is it about science fiction and westerns that go so well together? Is it because they both tend to feature frontier settings on the edge of civilization? Is it because they both celebrate archetypes of rugged individualists? Or is it just that a robot in a cowboy hat is friggin’ awesome? Unfortunately, most people trying to combine the two genres just throw leather chaps on an alien or have dinosaurs run around Arizona – pure laziness. Heck, it seemed like every ’80s sci-fi cartoon had one “cowboy” character in it, drawling in a southern twang and wearing an ill-fitting 10-gallon hat. (I’m looking at you Silverhawks and COPS). But while there was a lot of that faux-frontier spirit, some properties genuinely combined the best of both worlds (literally and figuratively) to make some truly original sci-fi Western stories. Here are the ten best space cowboy stories we’ve seen.

Since this is a Michael Crichton story, of course it’s about a futuristic amusement park breaking down and people dying horribly. But this one features robots going amok and killing people, as all robots are wont to do. Westworld’s much more science fiction than western — the park just happens to have an old west section filled with robot hicks. What makes this film watchable is Yul Brynner as an unstoppable robot version of his Magnficient Seven gunslinger. We’ll say it again, robots in cowboy hats are awesome… especially if they’re just shooting people down like dogs.

Okay, so this one doesn’t have obvious western doodads like heroes in cowboy duds or horses in it, but the crew of the Bebop are clearly doing western stuff in a western way. After all, they’re a group of bounty hunters traveling together and hunting down fugitives with a gun-slinging hero with a troubled past and a long-lost love… that’s as western as a wagon train full of John Waynes. It just that this cowboy happens to travel in a spaceship with a former space cop, a cryogenic defrostee, a super hacker and genetically enhanced data dog. And the ending – a battle between Spike and Vicious on desert-like Mars – is the classic western showdown, just with gun versus sword…and in the future…and on Mars.

He’s a space Indian with a talking horse who can summon the powers of animals. And that’s fucking crazy. But if you’re able to get past that, (and we can’t blame you if you can’t) Bravestarr actually tried to be smarter than the average ’80s cartoon with some episodes dealing with drug abuse and the casual racism that was the wild west’s major hobby. (But could you blame them, with those annoying high-pitched, buck-toothed prairie people?) Yep, they even had a kid die after O.D.-ing on the drug “Spin” in one episode. Yep, Bravestarr was the kiddie space Deadwood of it’s time, but if Ian McShane was a gun-toting horse. Well, moreso. 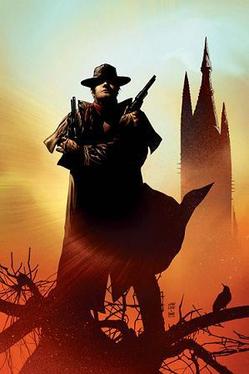 ?
This Steven King’s magnum opus… which isn’t hard when he’s decided just about everything he’s written is part of it. While much of the spooky knight-gunslinger’s story focuses on magic and horror, there’s a fair amount of science fiction in the story in the form of things that get shot, from Andy the villainous robot to Blaine, the psychopathic monorail. Heck, the Wolves of the Calla book’s main fight is against a bunch of Dr. Doom-styled robots armed with lightsabers and flying robot “sneetches” based on Harry Potter’s golden snitch. If you think  King is scary, imagine how terrifying his copyright lawyers must be. 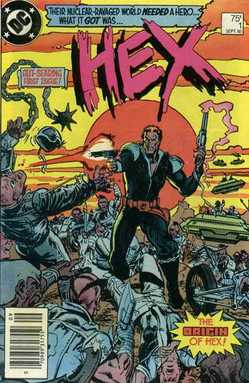 ?
Jonah Hex has a pretty shitty life. First he gets his face scarred by his adoptive Native American tribe, has to fight in the Civil War, and eventually ends up stuffed in a Planet Krypton theme restaurant. (Man, a corpse with a horribly scarred face must’ve really sold those Booster Gold Disco Fries.) But even worse, in his solo book Hex, he spent some time trapped in a distant Mad Max-like future full of mutants, motorcycles and pretty women to save. It’s so lucky he ended up in another time period where shooting someone in the face was a valuable job skill.

No, not the Will Smith vehicle – we’re talking about the original ’60s show. You know, that one that neither you nor anyone you ever met has seen. This show was more high-tech James Bond than space opera with secret agent Jim West and his gadget-laden partner Artemus Gordon fighting foes throughout the 1800s. This show was everything the movie wasn’t – smart, well-written and actually coherent – it also featured one of the great unsung villains: Dr. Miguelito Quixote Loveless, a tiny madman descended from Mexican royalty who used shrinking formulas, experimental explosives and steam-powered cyborgs to reconquer his family’s lands. How they got a racist amputee Kenneth Branagh from that is even harder to understand than Branagh’s fake southern accent.

This is often dark ’80s cartoon featured a team of cyborg space sheriffs who fought the Queen of the Crown, who sucked out the souls of her victims to feed her army of zombie slaverlords. Space cowboys versus space zombies — how did this show not catch on? Apart from the many Western parallels (badges that triggered their cyborg powers, talking robot horses), it also featured an obvious cartoon version of Clint Eastwood named Shane Gooseman, who could cybernetically shapechange to adapt to danger. You won’t see that in Gran Torino.

3) The Adventures of Brisco County Jr.

Ah, Bruce Campbell, is there no genre you can’t conquer? If you’re not familiar with it, Cambpell starred as Harvard lawyer Brisco County, who ended up travelling to the west to hunt down the killers of his sheriff dad. While seemingly a regular (if hilarious) western, the sci-fi parts of this series mostly revolved around mysterious “orbs” — time-traveling devices that led to a season two closer in which Brisco jumped around in time himself. Of course, there was no way he could jump to a time before Bruce Campbell was awesome, as that never happened.

What do you get when you cross a crazy (yet powerful) anime hero with the western genre? You get Trigun, Yasuhiro Nightow’s story of a donut-loving alien gunslinger who ends up causing destruction across a western-themed planet. He’s even followed around by a pair of insurance adjustors, Derringer Meryl and Stungun Milly, who have to total up his damages. It’s not a good a show as Cowboy Bebop, but it’s definitely the better sci-fi western; there’s no better example than Trigun‘s version of the traveling priest archetype, who gets a typically insane anime makeover as Nicholas D. Wolfwood, a chain-smoking holy man who wields a giant cross that’s part rocket launcher, part arsenal and entirely holy fucking shit.

Was there any doubt that this would win? This one is top-notch in all four sci-fi western flavors: spaceships, fistfights, whores and psychic craziness. You’ve got the great western archetypes (big, dumb muscle, whore with a heart of gold, tortured former soldier) right alongside some strong science fiction types (techie that talks to machinery, the cantankerous ship’s doctor, batshit crazy girl badass). It perfectly blends the two genres – one episode sees the crew running out of oxygen, while the next you’ve got them saving a brothel with a giant gunfight. That’s what you get when you have a writer like Joss Whedon — a smartly written show that features humor and action. Also, whores.