?In a fictional realm filled with folks troubled enough to dress like the hosts of children’s television shows to rob banks, there’s no question that fighting crime — super powers or no — is a pretty dangerous profession. Nobody can blame a hero for wanting to up his or her game a little now and then, especially when it comes to protecting themselves from giant lasers, shark bites and even common small arms fire. Between Batman and Iron Man alone there’ve been scores of costume updates conducted in the interest of kicking crime in the face a little harder, better, faster, stronger, etc. Still, not every hero is suited for sweeping changes – especially when it comes to armoring up. As a purely defensive costume element, overdoing armor just doesn’t jibe with most heroes’ power set. Things like agility, speed and a sense of humor can hardly pierce the veil of chunky plating and padding, which can pretty much render what makes a character recognizable moot. Continue reading to recall which heroes learned to love themselves just the way they were; the hard, heavy, metallic way. 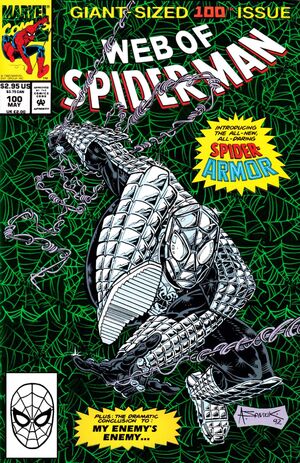 To Spider-Man’s credit, he doesn’t mess with new costumes very often and thanks to his keen scientific mind, there’s usually a method to the madness. Unfortunately, given how loosely defined his power levels are depending on a particular story arc, the armors either seem like a really good idea or a really moot idea. The original Spider-Armor looked pretty cool, was used once to help Spidey keep from getting shot and then melted by acid. I’m sure he had other alternatives (like the use of his spider-sense and agility), but hey, the dude built the suit at his college – good for him!

As multiple Topless Robot lists have been happy to point out before, Batman has had his share of both amazing and awful batsuits. Of course, being Batman, he always makes the most of his poor fashion choices by effectively kicking crime in the ribs, which is kind of the beauty of his near-decadent number of costumes. Judging from the Jean-Paul Valley armor used in Bruce Wayne’s spine-shattering “Knightfall” storyline, the clothes truly don’t make the man. In fact, the Valley-worn armor proved its utter uselessness when it was completely defeated by…tight spaces and…sunlight. If that hadn’t been the point of the storyline, this armor would be likely be #1 on the list. Michael Jon Carter has had his share of crap luck. Yeah, he’s a burnout former jock who only has powers because he stole some equipment from the museum he was a janitor at in the far future, but he’s tried pretty hard to make up for it. Writers during the ’80s and ’90s didn’t make it easy for him though, what with the constantly having his uniform destroyed and replaced by ugly, bulky, malfunctioning armor (and a cybernetic arm). Luckily, he’s one of a few characters whose life actually seems to get better after every DC Crisis, so his troublesome mecha days could forever be behind him. Of course, given the nature of his time travel-based adventures, who knows? Fans may see his former fashion faux pas again. Yes, it’s kind of cheating to nitpick the superfluous and oft-apocryphal outfits super heroes wear in action figure lines, but every nerd this side of Ted Turner knows it’s a sin not to capitalize on a perfectly good opportunity to mock the green-mulleted one. Thanks to his special “Pollution Armor,” Cap’n P is stylin’ adorned in shiny redness. Interestingly, the name of his armor suggests that it is made of pollutants rather than protects against them, which is staggeringly accurate considering the hero’s streak of poor decision-making – like entrusting children with his powers, for example.

?It may seem unfair to single out Wasp from the armor-tastic cast of Fox Kids’ Avengers: United They Stand, but the truth is, she’s the only one made inherently less awesome by the add-on. Janet Van Dyne (shown above, holding Ant-Man in his armor) essentially went from being a spritely fashion model to a metal bug with dangling peripherals, which might make sense when battling evil, but as her comic book costume designs (all 8,000 of them) attest, it can be done in a far more stylish manner – mutant look excluded.

As a legacy franchise full of various, sometimes-unrelated characters taking the same mantle, it’s inevitable for a turd to fall in once in awhile. In the case of Manhunter that turd is Chase Lawler, an unwitting victim of a previous Manhunter who really seemed to enjoy murdering other dudes who used his name for some reason. Lawler’s ugly armor and (sh/gr)itty storyline is pretty typical of the early to mid ’90s, when Spawn lookalikes were snuffed just as quickly as they were introduced. It all worked out for the best, though. Thankfully Kate Spencer, a capable hero, now represents the property with some reasonable duds. 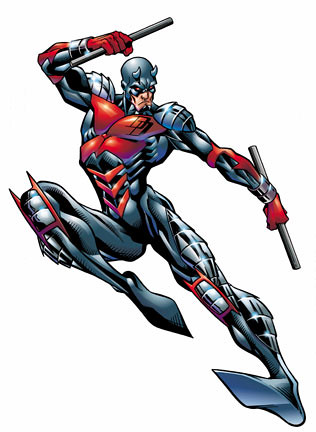 All the easy jokes about Daredevil not being able to see what he was wearing aside, his grim early ’90s armor was never as iconic as his red uniform – a fact emphasized with abandon by the fact that it was inconsistently illustrated during its tenure. Sometimes it looked as good as a ’90s re-deco could and its only flaw was that it would always be compared to an original design many fans considered flawless. Other times it looked every inch of the impractical nightmare that it could be – a bulky, pointy suit with a distracting color palate. It’s always a bit simplistic to fall back on the “if it ain’t broke, don’t fix it,” chestnut, but in Daredevil’s case, it really rings true. 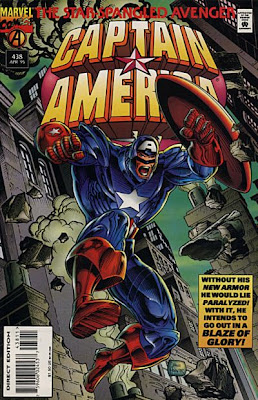 It’s hell getting old. That’s what Steve Rogers finds out when he’s diagnosed with WereallywanttoputCapincoolermorthismonth-itis and is forced into what’s basically a mecha suit to heal him up and keep battling evil for the red, white and blue. The exoskeleton armor was super necessary because Cap had already used all of his vacation days going to the Savage Land and Monster Island and stuff for those Marvel Swimsuit specials or something and could just, not fight evil for a few weeks while he got put on suspended animation and some Red Skull blood that would fix his system. Once he got evil-blooded up, it was back to the classic uniform and scaly under-armor fans crave – a very welcome return. 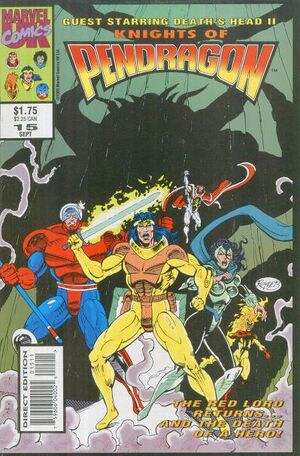 What if Spider-Man took the spider off of his costume? How about Superman without his “S” shield? Batman sans bat logo? They’d just be “Man,” right? So when Union Jack, a super iconic defender of his nation’s flag (with a universally recognizable costume) trades in his complete and utter namesake for a series of near neon orb-based armor components, it’s enough to choke even the most laid-back superhero comics fan. It’s not like he was the worst-dressed of the Pendragon crew – the whole team looked like they were trying to outdo each other on the obnoxious scale, but a Union Jack-less Union Jack looking like an American football player was about as wrong as a beer and ice cream float… before noon.