Menu
Home
>
Movies
>
The Terminator Is For Sale, and Joss Whedon Wants to Buy It 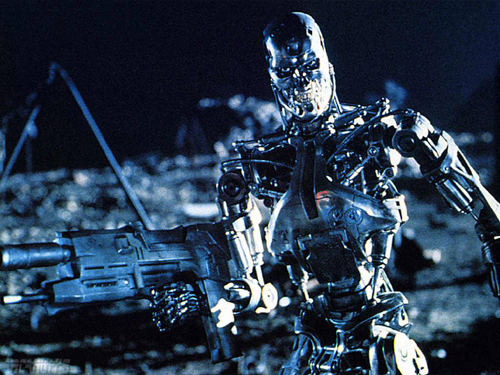 ?
The more ridiculous part of the story is true: the Halcyon Holding Group, which owns the rights to the Terminator franchise, has gone bankrupt and is trying to sell rights to the Terminator concept to pay its debts. That Halcyon went bankrupt after paying only $25 mil for the Terminator franchise back in 2007 — and after the generally crappy Terminator: Salvation grossed $380 mil this year — is impressive. Even assuming big studios like Sony want the franchise — which is probably a safe bet — lord only knows what they’ll do with the storyline, or who they’ll hire to make it. I’d say it;s hasta la vista, baby, for any hope of a sensible storyline to the series, unless a miracle happens.

That miracle won’t be Joss Whedon taking control of the Terminator series, despite his offer to buy it for $10,000. Whedon penned an open letter to Halcyon, saying what he’d do to save the franchise. My favorite idea:

4) Christian Bale’s John Connor will get a throat lozenge. This will
also help his Batwork (ten grand for that franchise too, btw.)

It’s obviously tongue-in-cheek, so please, no need for any Whedon-haters to bust a gut. You can read the full letter over at Whedonesque. (Via /Film)