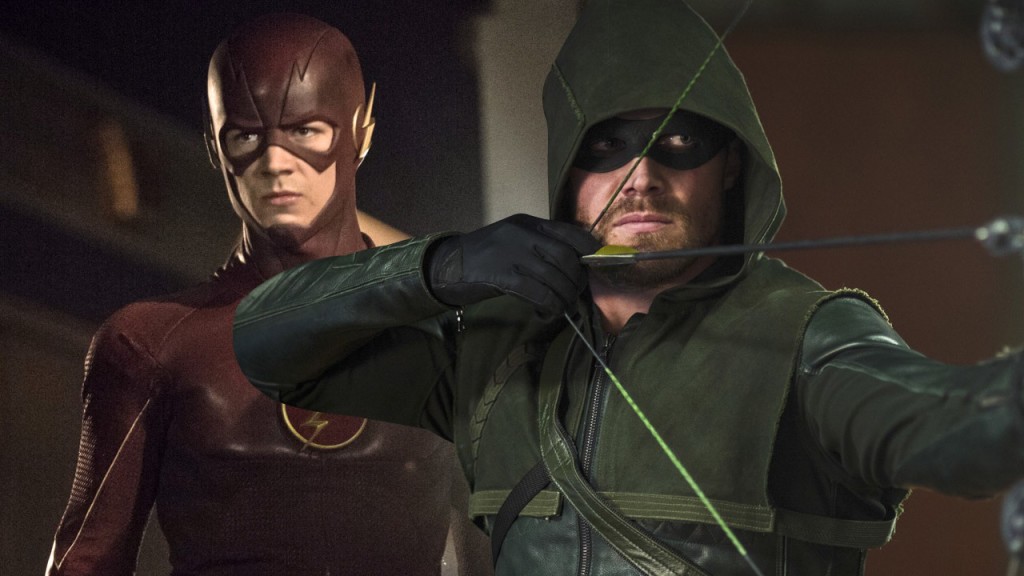 Flash Season 1 and Arrow Season 3 – What can I tell you about these two shows if you haven’t been keeping up until now? Probably not a lot, since I myself haven’t, but just from seeing bits and pieces here and there, I know that (a) The Flash started out kinda dark, got a lot more fun later, and everyone hates Iris West; and (b) Arrow spent a whole lot of time building up Brandon Routh as Ray Palmer so they could spin him off into the next CW superhero show, Legends of Tomorrow. Both sets contain deleted scenes, commentaries, gag reels and the like. If you happen to have red/green color blindness, Arrow is the guy with the longbow.

Doctor Who: Dark Water/Death in Heaven 3D – Last season’s two-part finale as it was shown theatrically: a movie in 3D. If you have a 3D TV, I hate you for having that much money, but at least if you buy this I might respect your viewing habits a bit.

The Woods – Okay, despite the bare-bones disc, this one is a personal sentimental favorite of mine, as I spent two weeks on the set way back in 2002 and made several good friends. Director Lucky McKee (May) is working with an odd script about a pyromaniac girl sent away to creepy boarding school, where the girls are fed mud-infused milk to turn them into tree food. Patricia Clarkson is the mysterious headmistress, and Bruce Campbell plays our young heroine’s dad, who decidedly does not save the day in a manner one might hope. MGM kept the movie on the shelf four years before letting it escape to DVD, and it deserves better. But since this was the production that allowed me to meet Bruce Campbell, I may be quite biased.

Zathura: Anniversary Edition – If you don’t already own Jon Favreau’s sci-fi themed spiritual sequel to Jumanji, it’s worth it. When a magic board game turns their house into a spaceship, complete with alien threats, surly astronauts and meteors, two kids must play all the way through if they hope to survive. Featuring early star turns by Josh Hutcherson and Kristen Stewart, it’s just the right blend of scary and fun for kids too old for fairy tales but not yet ready for horror movies. However, the “anniversary” edition adds little that’s new – there’s a motion-storybook read by original author Chris Van Allsburg, but the rest is just hype for the upcoming Goosebumps movie.

Tokyo Ghoul: Season 1 – Anime in which a college student given an organ transplant from a ghoul must navigate the complexities of life as both a 19 year-old human and a half-ghoul with a new desire for human flesh and a complex ghoul society to fit into. Available in regular or deluxe packaging.

The Indian in the Cupboard – Despite the rave review from cultural scold Michael Medved on the cover, this is a surprisingly great kids’ film from Frank Oz, about a young boy who realizes his cupboard can bring action figures to life. Thankfully, he sticks to befriending the kind-hearted Native warrior in his collection (played by rapper Litefoot). Lord knows what would happen if my cupboard of toys came to life.

The Satan Bug – With a name like that, I don’t even need to know what this 1965 flick is about, do I? [Looks it up] Dammit, it’s about a virus; I was hoping for a demonic insect.

Dirty Work – Bob Saget directs Norm Macdonald and Artie Lange in a revenge-for-hire comedy that ought to be funnier than it is. “Note to self: buy ass wart cream for giant wart on ass.” There, I just spoiled the best line.

Those seem to me today’s top picks. Anything else you’re picking up?