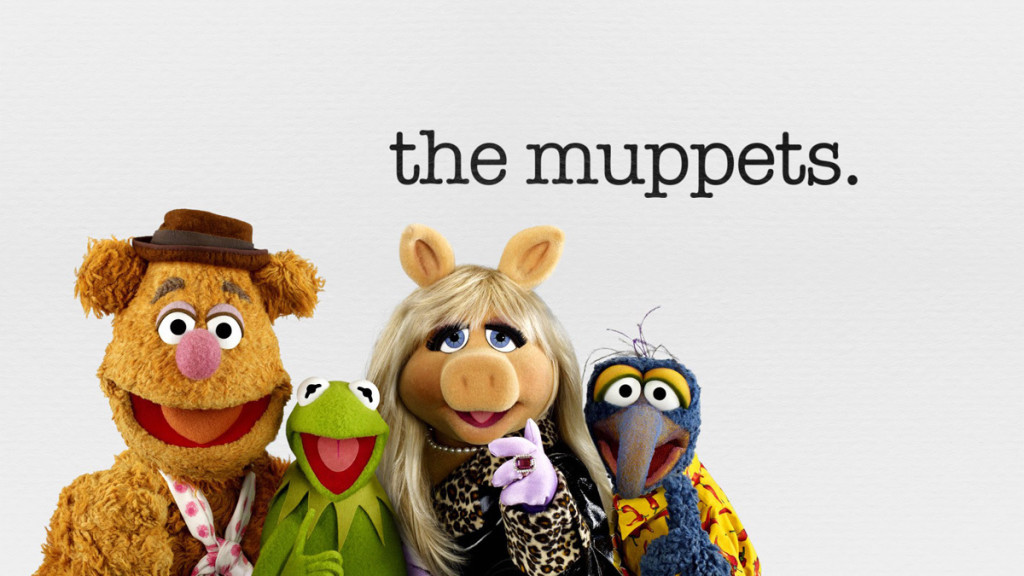 When ABC announced the new Muppets series was airing this fall, I was thrilled. I grew up with the Muppets, starting with episodes of The Muppet Show, and several feature films. By the time I outgrew Jim Henson’s greatest creations, they had already taken Manhattan and were moving on to adapting Robert Louis Stevenson and Charles Dickens stories, but there was still love in my heart for Kermit and the gang. As I myself became a parent, I was delighted to introduce my own kids to the Muppets, and while the original series was a little too dated for their tastes, my older children loved the two most recent Muppet films.

Last night we sat down as a family to watch the premier of the new series which, by the looks of the trailers, was a project more like the classic series. Rather than the original variety show format, it looked to be a mockumentary not unlike The Office, but featuring the characters I’ve loved for decades. The humor portrayed in the trailers was more adult in nature, but it seemed like it would be the perfect show for both young and old fans of the Muppets.

Boy, was I wrong. Beware, if you missed last night’s episode, there are some spoilers ahead, but if you’re reading this, you likely made the wise decision to avoid The Muppets for any of the other, likely more entertaining shows premiering last night. But if you’re not scared of spoilers, stick around…it’s time to get things started.

Unless you’ve been taking a hiatus from the Internet and television for the past few weeks, you know that the seemingly impregnable (though certainly abusive) relationship between Kermit and Miss Piggy has ended. Now to be fair, for the better part of 30 years, Piggy has treated Kermit like shit. Between the demeaning ways he’s talked to and the numerous karate chops, it’s certainly not been easy being green. That being said, Kermit has turned into a real asshole.

I can understand there being tension between the couple since they still have a professional relationship (he’s the showrunner of Piggy’s late night talk show), but the once perpetually pleasant amphibian now takes his problems out on everyone around him, including a seemingly innocent Tom Bergeron.

By the time the show is over and Kermit is handing out apologies, he’s been a jerk to just about everyone on his staff, showing only the slightest concern for Beaker, Dr. Bunsen Honeydew’s assistant/Taser victim. This is the frog whose message has been of positive thinking and kindness for years. He sang “The Rainbow Connection” for God’s sake! He’s the last character on this program who’s supposed to be an asshole, and instead he takes asshole center-stage.

When it comes to comedy, pretty much nothing offends me. That being said, the face of comedy is changing rapidly. Just a few short years ago, jokes about sexual preference, fat shaming, disabilities, and other subjects that are now deemed to be insensitive prevailed. Now, a much stricter eye is judging media.

There wasn’t anything too particularly racy in the first episode of The Muppets, but the comedy went places I would have never expected in this day and age. Early jokes include references to the weight of Miss Piggy, insinuate that a member of house band The Electric Mayhem is an alcoholic, hints at a good amount of puppet sex going on behind the scenes, and the difficulties of dating when your online profile states you’re a bear (apparently many who responded to Fozzie’s ad weren’t his type).

I doubt that anyone will be up in arms about the content of the pilot episode (though parenting groups like One Million Moms are quick to state that the show is far from family friendly); even its racier jokes are rather tame. The problem is that the humor feels out of place, and just isn’t that funny. The Muppets’ attempt at hitting both young and old audiences is about as accurate as Lew Zealand’s Boomerang Fish.

3. Assholes in the Wall

If anyone is supposed to play the antithesis to Kermit, it’s the ever present hecklers Statler and Waldorf. This pair of crotchety old men have been some of the ballsiest voices in the history of the franchise, but unfortunately in this outing they’ve been gelded.

First, they’ve been moved from the balcony to the front row of Miss Piggy’s late night show. Sure, this is a minor nit to pick, but it’s a massive dynamic change. They were supposed to be the omnipotent Greek Chorus of the cast, wittily biting at their fellow cast members. Now they’re front and center, and their comments feel forced rather than the unexpected quips they made on the original program.  Second, they’re just not funny. They are SUPPOSED to be the most mean-spirited members of the cast, not Kermit, and they just don’t have any bite. The few times they pop up, they just don’t get laughs, sadly like so many of the other jokes in the pilot.

4. Words I Never Thought I Would Say – Elizabeth Banks Was the Best Part of the Episode

At first it’s believed that Miss Piggy hates Banks due to a horribly botched Hunger Games audition (one of the weakest scenes of the episode), and wants her kicked off the guest list. Kermit, determined to not let his ex push him around, keeps the actress on, and employs sidekick Scooter to keep her away from Piggy until the very last second.

Scooter has apparently been taking asshole lessons from Kermit, to the point where he violently tries to restrain Banks as to not spoil Kermit’s plan. Thankfully, Elizabeth manages to kick the shit out of Scooter both physically and verbally with some of the best lines in the episode. She stands out far better than any of the other characters, both breathing and the ones with hands up their asses.

You know how you see a trailer for a comedy film and you get the sinking feeling that you just witnessed every funny moment in the film? If you’ve watched any of the trailers or the ten minute long promo reel, then you’ve see just about everything last night’s episode of the Muppets had to offer, and perhaps then some.

As I watched, déjà vu washed over me just minutes into the show. Anything that elicited as much as a chuckle was something from the promo or a variation of it. One glaring change, however, was the recasting of Fozzie’s girlfriend Becky, replacing NCIS’s Margot Harshman with Riki Lindhome. The promo scenes were unnecessarily reshot with Lindhome in the role, and while she may have more comedic experience than Harshman, she apparently left it in her trailer. According to IMDB, Lindhome is only appearing in one episode so far, so the recasting of Becky is even more inexplicable.

Really though, if you want to experience what The Muppets could have been, check out the promo reel above; its ten minutes is far superior to what aired last night. Hopefully it is indicative of what the show could still be, if it survives long enough.

As a child, Animal, the Electric Mayhem’s rather animated drummer terrified me, particularly after he grew to Godzilla-sized proportions in the original Muppet Movie. That being said, as I’ve grown older, he’s quickly become one of my favorites, simply for his destructive nature. As much as it might amuse me, there’s something seriously wrong with a show when the biggest one-trick pony you have is the funniest character.

Animal does absolutely nothing he hasn’t done before in countless Muppet iterations. He’s still funny as hell (and the best thing to ever happen to Imagine Dragons), but for the love of God, he’s fucking clown shoes! He breaks stuff, eats stuff, and bangs on drums. I love him dearly, but he is not what I would consider high comedy. The fact that he stands out just shows the amount of potential missed with every other single Muppet in the cast list (though Sam the Eagle is perfect as the network censor). The whole thing just feels like a waste of a good property and a mindless Disney cash grab. I’m sure we can expect Disney Infinity 4.0 to feature The Muppets cast.

So it turns out that the reason Miss Piggy hates Elizabeth Banks so much is because Kermit dumped her in front of a Pitch Perfect 2 poster featuring Banks. I’m willing to say that’s a pretty implausible reason to hate someone, but apparently it’s enough for Piggy. We’re then treated to a flashback (because apparently they’ve been filming documentary footage far before the premier of the show) of the big breakup that the news and social media has been obsessing over for the last few weeks.

Based on the behavior of the characters over the past few decades, I had some expectations when I saw they were going there: flailing Kermit arms, a death threat screaming Piggy, capped off with a karate chopped frog flying across a crowded Manhattan street. Sadly, we got none of this, instead replaced with a sad breakup that belonged more on Grey’s Anatomy or any other ABC show than here. The show essentially ended on a downer, which typically doesn’t work for a comedy. Any fun I had up to that point was quickly drained away. Thankfully, they ended the episode with some Animal hijinks, so anyone watching who recently experienced a break wouldn’t head directly into a liquor bottle. See? Animal fixes everything.

I think my now seven year old summed it up best as the credits rolled: “That was it?” He watched dutifully, laughing at Beaker, Animal, and Elizabeth Banks whooping Scooter’s ass, and that’s about all. I think by the time he wakes up tomorrow he will have forgotten it. Unlike One Million Moms, I wasn’t covering his ears to prevent him hearing stereotypes about what bears do in the woods or rat sex, but I didn’t have to explain it either, because I never laughed. Instead, we enjoyed the limited amounts of slapstick and little else. The show just wasn’t funny. I laughed more during the first five minutes of the far superior (and likely more family friendly) Fresh Off the Boat then I did during the entirety of The Muppets.

I’m sure we will be forced to endure at least an entire season of the show; with Uncle Walt’s company pulling the reigns of ABC and what is likely a low production cost, I’m sure they’re going to give it a fair shake, and quite frankly, it can only get better. As for me, I’m more inclined to pick up the original Muppet Show on DVD and actually laugh.