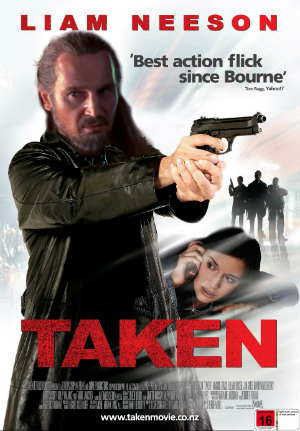 In case the name of the property didn’t make it clear, the entire point of the Taken franchise is family members being, y’know, TAKEN. And skills used to get them back. But now NBC thinks you want to see just how Bryan Mills acquired his CIA talents…and possibly, but not probably, how he also acquired the “Amurrrrican” accent that sounds like a badly concealed Irish one, because it is.

I’m sorry, but the only way to do this right – the ONLY way – is to have it be Taken meets Murder, She Wrote. Like, everywhere he goes, Bryan Mills coincidentally encounters somebody being Taken, and every other week there’s some new family member we didn’t know about before…Surprise! They get taken. And so he goes and kills half of Europe, which replenishes by the following week.

Yes, this would make him seem incredibly dumb by the time the movie-era rolls around to ever let his daughter go anywhere. But since dumb decsribes the whole concept anyway, freakin’ go for it.