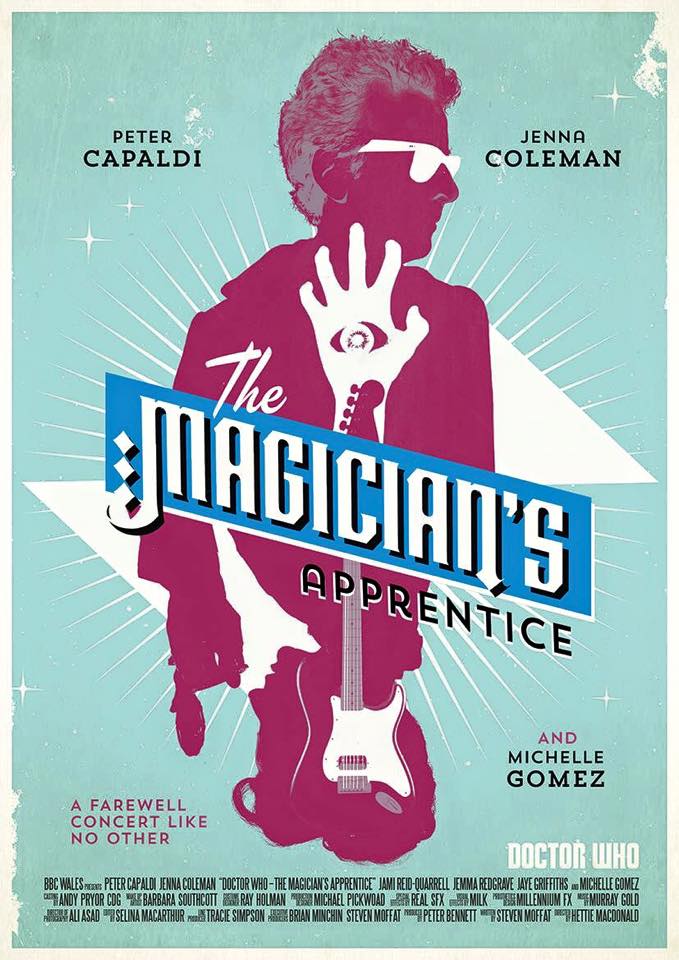 Well, we kick things off with laser biplanes, which certainly gets my attention. Had it not been totally spoiled everywhere that this episode would involve Daleks, I don’t know how long it would have taken me to recognize the “war has been going on so long, we’ve run out of a lot of technology” aesthetic from “Genesis Of the Daleks,” but yeah, I got Skaro pretty quickly. The creepy hand-mines were cool, and the reveal that the kid’s name was Davros was pretty much a Holy Shit moment. That said, it would seem Skaro makes absolutely no progression in aesthetic between the era of kid Davros and frighteningly old/deformed Davros (circa “Genesis”), which doesn’t entirely make sense, when you think about it. I guess they run out of laser biplanes and nothing else. And  we also make very clear that with a time travel show, everything can be retconned, so that the evil arch enemy is now that way because of something the Doctor did in his past that had yet to be done in the Doctor’s present the entire rest of the show. Okay then. Next showrunner can retcon that if he or she likes. We’re already playing with the notion that major character deaths can be undone, even though nu-Who showed us pretty early on why that’s a bad idea and it basically summons Stephen King’s Langoliers.

To show off the budget, we see a Hellraiser-type dude on multiple worlds, as well as quick cameos by critters like the Ood and the Judoon, just because. Creepy robed guy serves Davros and seeks the Doctor.

Then we have Missy, back to life without explanation, hinting that the Doctor may have at least once been female or transgender, stopping planes in the sky but lacking the ability to do anything with them. Then Clara being summoned by UNIT, because they take her seriously now. Just as I try to explain to Julia how the Doctor and the Master are frenemies, Missy conveniently goes into detail about it. Then we find the Doctor in the Middle Ages, teaching everyone to say “dude,” which is a word I’ve never heard him use before, and playing rock guitar (are we going to retcon him into being Bill and Ted’s father? Because that would be most non-non-NON heinous).

Hellraiser dude reveals himself as King Hiss from Masters of the Universe. Takes the Doctor and Missy and Clara away to an invisible planet that turns out to be Skaro again. In one hell of cliffhanger, Missy and Clara apparently get ex-ter-min-ated, while the Doctor goes back in time to kill young Davros, which is exactly the sort of plot he has never succeeded at before.

So: I love the old-fashioned cliffhangers, and I hear the season will mostly be two-parters this go-around, something I’m totally onboard with. I like that Capaldi has settled into a Doctor who can be relaxed and showcase his eccentric interests from time to time. Missy is getting weirder and weirder, which is fun, and Clara seems like a whole new character.

And yet I really worry how they’ll resolve this. I very much doubt this is the end for Clara, Missy or even Davros (though Davros dies every time he shows up, and always comes back), and there’s no way that a kids’ show (which this is still considered in the UK) is going to have its main hero murder a child, even if it’s Junior Space Hitler. So I’m afraid that whatever happens next week will be the equivalent of hitting “undo” a bunch of times in Photoshop.

I also learned, in trying to explain the Daleks to my wife, that “pepperpot” is a more English-English word than I thought. It is indisputably, according to her, called a pepper shaker.