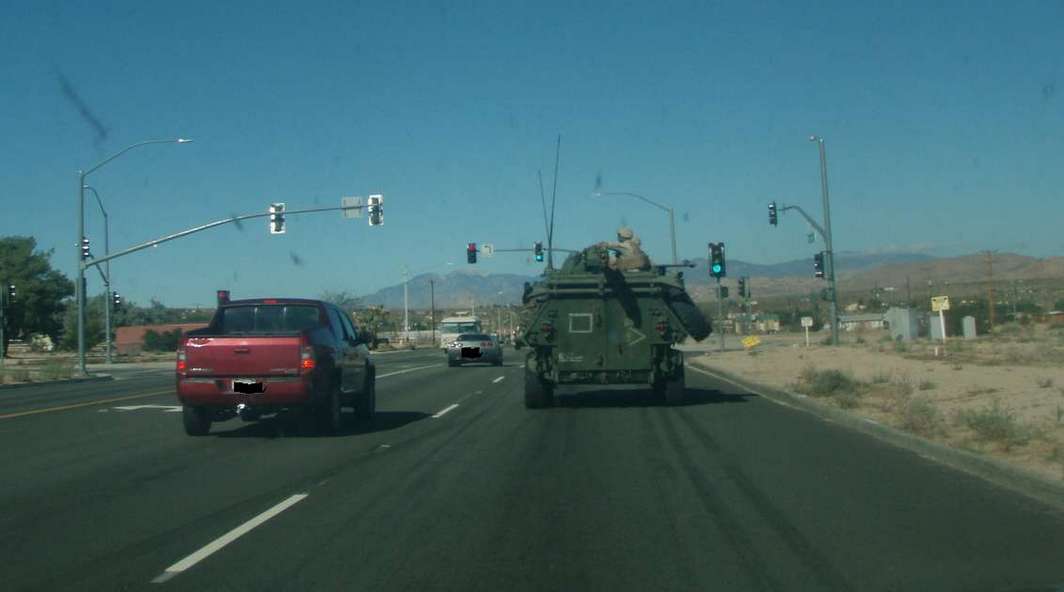 I took a picture of a tank rolling down 29 Palms Hwy. How would you like to see these rolling thru your town? No, I don’t live in any of today’s war zones. These guys were heading out of 29 Palms and heading to Camp Pendleton. They have to hit several freeways to get home so it’s quite a sight for everyone along the way. I had to cut the convoy to make a turn so I was able to get a decent picture. Love the military equipment and all of smiles and waves from the guys as you pass by and wave at them.

We are now into fall. With that said the temp out here is still in the 100’s. So with fall I have made a new soup and thought I would share with you – it really turned out good. Everything came from the 99 cent store, so this is also one of my how to eat cheap but well from a Dollar Store ideas. 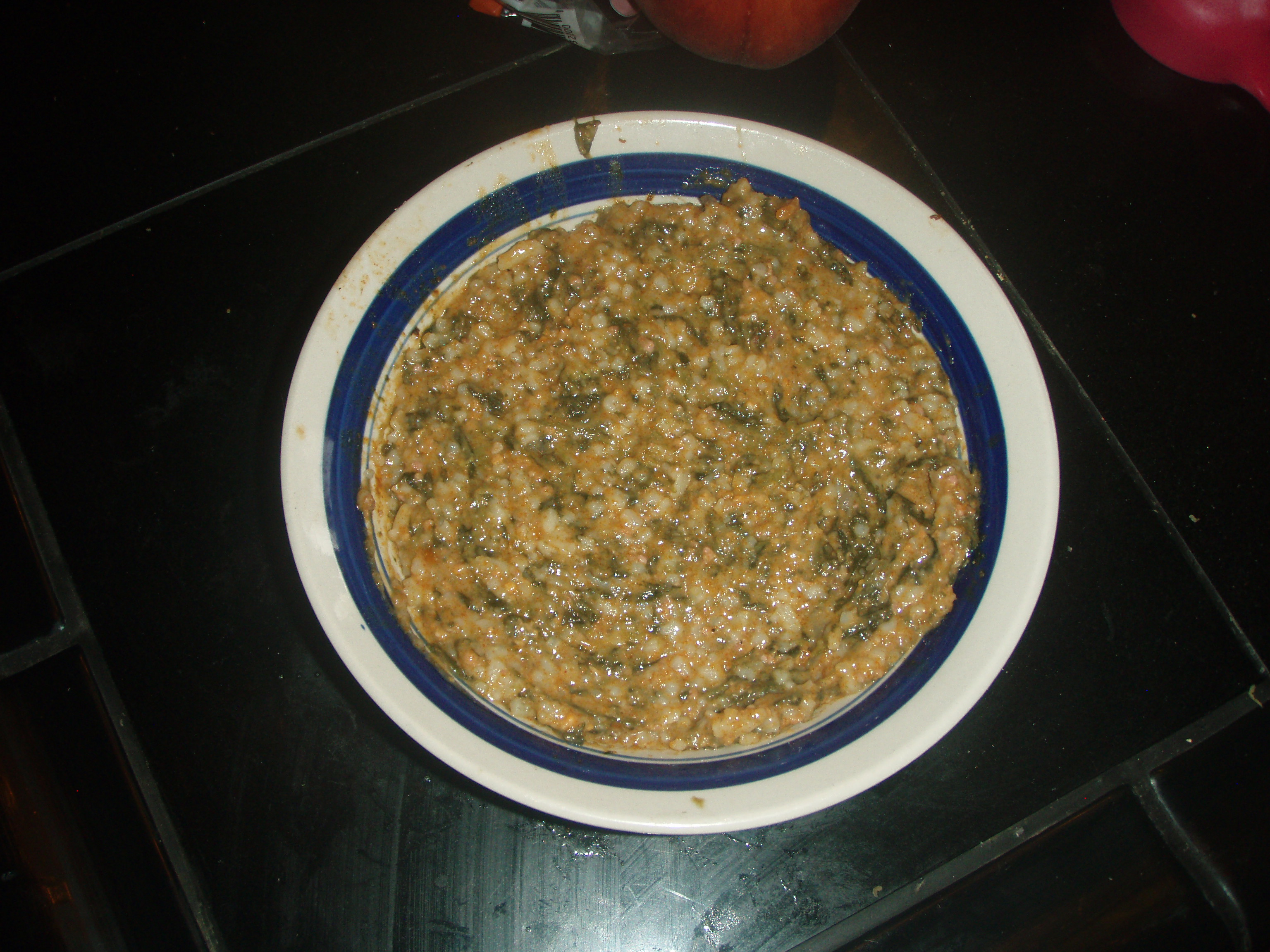 1 cup of rice – if you don’t like rice sub in noodles, elbow mac what ever – if you want it thicker add a bit more rice

1 – 7-9 oz pork chorizo sausage – if you can’t find chorizo regular sausage will do and then add Tabasco to taste. If you use the chorizo it is spicy

Just dump it all into the crockpot. The sausage and all else cooks in the crock. Cook a few hours to make sure the rice is tender. And enjoy. I have no idea on calories, depending on the size of the bowl for your servings it can do 6-8 bowls. You can always add more milk or water or rice to last longer

Now on to your questions. These were ones for last week that did not make it in as I had the Jason Momoa and Film Fest article. So we saved them for this week.

QUESTION!!! You live in a desert and domestic cats are thought to have evolved to live in arid climates. Have you noticed any signs that the cats are more comfortable in that environment than their host?

Well, my 5 are VERY comfortable in this environment. They have a mom that goes out in the heat every day to bring home the kitty cookies. They live in central air conditioning and always have the TV on. Plenty of windows and French doors to catch sun if they want and lots of soft furniture to laze on. Yep, they win. I so want to be a pampered house cat.

Have you ever lived in states other than California? Which ones were nice?

I was born in Massachusetts. And moved to Cali in the 4th grade. My dad was transferred to California when I was in the 1st grade and we would visit in summer as this was to be a temporary transfer from MIT in Boston to a defense company in Anaheim, CA. Well when the transfer became officially a you-are-not-going-back, we moved. Then after that I spent many summers in Sarasota, FL, with my grandparents. That was fun every summer I practically lived at the circus as Sarasota was a circus town, and home of Ringling Brothers. I really liked Florida – but hey, what kid wouldn’t love getting to live at the circus for the summer. Then in Anaheim we lived right across the street from Disneyland – yep that close.

QUESTION!!! What are one thing you like and one thing you don’t like about the new format? I like that you don’t have to keep clicking next page to read articles. I don’t like that the sites URL icon looks like “TRU” in bright pink… looks like I’m visitng a Code Pink Truther site.
And I would like comment counts to appear on the main page next to article titles, but that’s fairly minor.

Well, the first couple of days I found it awkward until I got used to it. I am seeing the site on a desktop computer with windows 7. So it looked a bit weird and I had trouble finding things. But this is over with and I am used to it now. I think the picture quality is much better. I used to have to run all photos thru a program called Pixlr before. Now I can just send them as is straight from the camera, which appears to have improved picture quality. My kitties look even more beautiful and cute.

Let’s say some douchebag sidewalk-chalks swastikas on the back door of the black church a block from your house, and you take pictures and then scrub it off. When you post a blog about it, do you post the pictures on the blog? Or link to them with a disclaimer but don’t actually display them? Or just don’t display the pictures because you only took them for the police anyway and showing them accomplishes the goal of the shitbag perpetrator?

I would post the pics with a blur over the image, and give the clear ones to the local police. That way you can show in your blog that it really did happen without fully displaying the handiwork.

What’s the best way to get sidewalk chalk out of khakis?

Oxy Clean and or any other laundry pre-wash works pretty well. The trick is to get the stains in cold water as soon as possible and keep them moist until you can toss in the washer.

Tomorrow night is the opening of <em>Addams Family: The Musical</em> It has been a hard few weeks getting this show ready – but damn it is good. Opening night is sold out. We keep getting ticket updates and our Saturday show this week only has a few tickets left. Yippi. Tonight we have our final dress run of the show. This is called invitational dress. We can invite a few friends to get an audience, they don’t pay, but we may stop and start the show to make minor corrections.

Well, that’s all folks. I hope you enjoyed my rants and raves on the film festival. It was an interesting experience. I could not believe all the Tweets, shares etc that it got. That was so exciting for this old gal. Who knows – maybe LYT will let me loose at another event in the future. So be good to each other this next week and as always HUGGS.

Feel free to leave more questions on all worldly and otherworldly matters  below, or email directly to boydappraisal at yahoo. Nothing is too important, or too trivial.