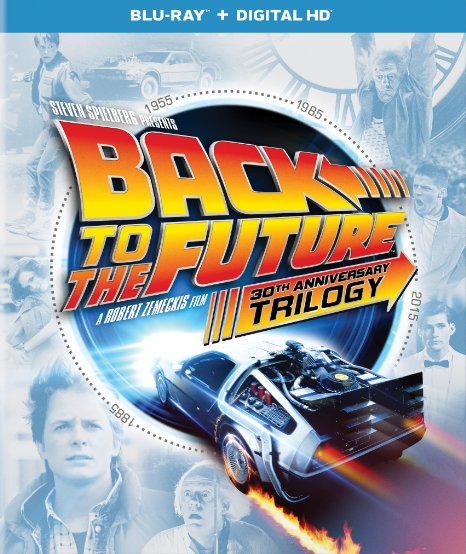 Back to the Future Trilogy – In all honesty, I only think the first film is an unimpeachable work of classic genius, while the two sequels are exercises in bending over backward to justify their own existence. And yet, with Oct 21, 2015 just a day away, the nostalgia factor gives them a credibility they didn’t necessarily earn upfront.

I never needed to know that Marty is always over-sensitive to being called “chicken,” nor did I ever care about Doc Brown’s love life. I got them anyway, and am only glad the franchise was not milked further. Though I do enjoy thinking about how it would be updated if rebooted:

“We can’t have a conversation if you’re just gonna make stuff up!”

Jurassic World – Look, for a movie that is supposedly about satirizing capitalism and over-marketing, I think we need to deduct major points here over the fact that one of the Blu-ray extras is “Jurassic’s Closest Shaves – Presented by Barbasol®” Seriously, fuck that. As for the movie itself? It’s all I wanted from a movie about a dinosaur theme park that screws up. And it took them four movies to make it. I do not give a flying fuck what shoes Bryce Dallas Howard has on – I want theme park guests being eaten. And the movie delivers.

Tales From the Crypt Presents: Demon Knight – One of my all-time favorite ’90s horror-comedies ( I saw it 4 times in the theater) sees Billy Zane playing a foul-mouthed cowboy demon who seeks a sacred key filled with the blood of Christ – and is willing to give everyone in his way a hallucinatory fantasy in order to get it. In one of her first lead roles, Jada Pinkett is the Final Girl who makes things very difficult, while William Sadler, Dick Miller, CCH Pounder, Charles Fleischer and Thomas Haden Church are among the unfortunate victims. Disc includes two commentaries – one by director Ernest Dickerson (The Walking Dead) and another by the effects team) – and a making-of documentary with all-new interviews. Trivia: months before it became a hit or anyone had heard of the band, this was where Filter’s “Hey Man Nice Shot” first entered the public consciousness.

No need to take my word for its greatness, though.

Tales From the Crypt Presents: Bordello of Blood – The follow-up to Demon Knight ain’t quite all that, but is mostly amusing today because it stars ex-SNL‘er and current conservative talk-radio host Dennis Miller as a smart-ass private eye who takes on a brothel full of topless vampires with Holy Water squirt guns. Miller wasn’t quite game enough to return for the bonus features, but vampiresses Erika Eleniak and Angie Everhart were, along with Corey Feldman and writer-producer A.L. Katz, who does an audio commentary. A third planned Tales from the Crypt movie, Ritual, only appeared years later as DTV.

Z for Zachariah – In a post-nuclear war world, Margot Robbie must choose between Chris Pine and Chiwetel Ejiofor. And she thought radioactive genocide was tough, amirite?

Atari: Game Over – Documentary about the E.T. game and its alleged burial and unearthing, which has been on Netflix a while and features a shoutout to this very site under its old name, as screencapped by me a while back… 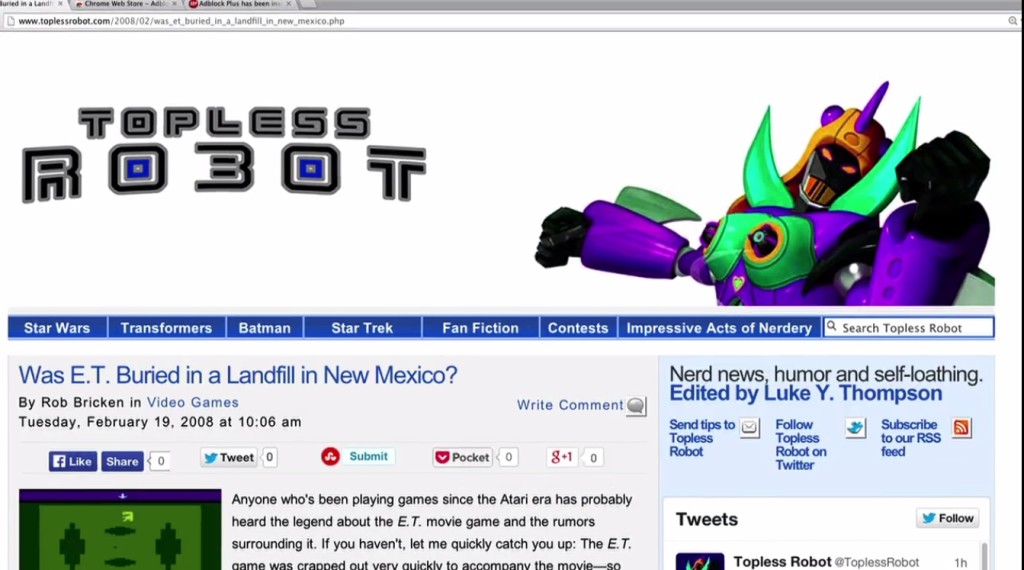 The Larry Fessenden Collection – Receding hairlined, glass-eyed indie-horror auteur Larry Fessenden has now packaged four of his earlier features together, along with shorts and music videos. No Telling (1991), Habit (1995), Wendigo (2001)  and The Last Winter (2006) are included. I make fun of the man, but all his movies are worthwhile – it’s just his cameos in other films, wherein we are somehow expected to believe he’s playing a character, that make me LOL.

Dragon Ball Z: Resurrection F – I hear from fans that this is quite good. I, frankly, could not care less. Except to the extent that I care about you, dear reader, which is not inconsiderable.

The Oblong Box – Vincent Price and Christopher Lee play around with dead bodies, and surely no good can come of that. Except to the viewer.

Well, kiddies…did I miss anything major this week?