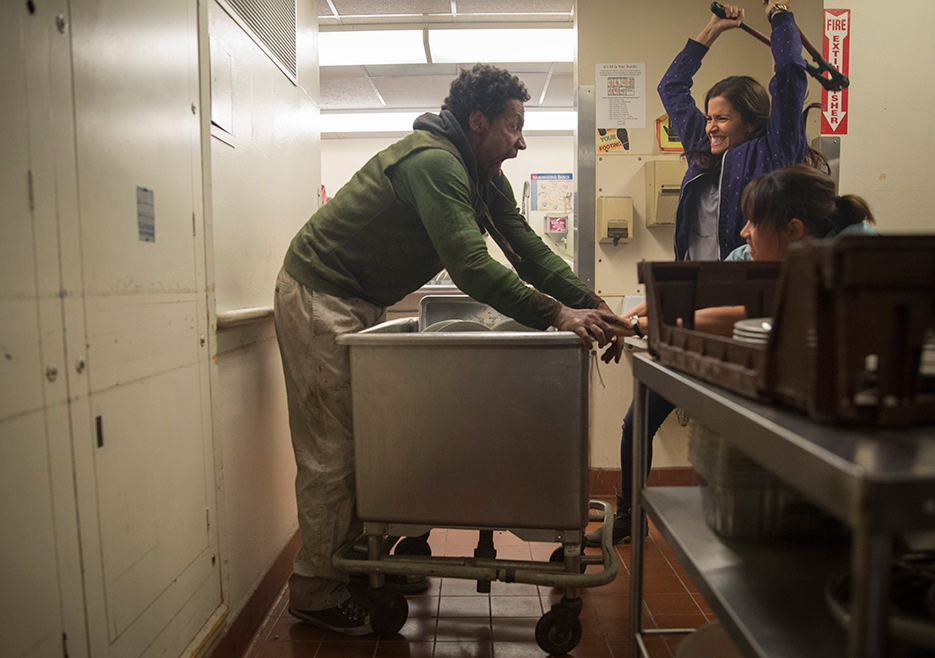 Aaaand that’s a wrap on the first season of Fear the Walking Dead, which turned interesting just in time to end. Here, I think, is the basic test to apply: can you name one moment – just one – in this whole first season that was remotely as memorable, and reference-able, as Rick Grimes discovering the hospital doors that read “Don’t open. Dead inside.”? I say no. Nothing close. And granted, the parent show has the advantage of a comic to (somewhat) follow, but I’m not sure that’s an excuse.

So, does L.A. blow up real good in this last one? Away we go…

-LA in complete darkness is haunting. Too bad people will have to show up onscreen soon and ruin the mood

-Travis is the Only Decent Guy left. We get it.

-D’oh! Heckuva time for your kids to find out you were a torturer rather than a victim, Salazar.

-Damn, Travis’ ex is harsh, but she does want to save him.

-Meanwhile, Travis is still tortured about being decent. Hatosy pleading for his life seems semi-tough for the first time. FORESHADOWING!

-Salazar apparently just strolls around everywhere unhindered. Like, how did he even get to the arena and back?

-Oh thank God, next Sunday we’re back to zombies attacking characters we actually care about.

-Ahhh…by the end of this episode, we will see whether Tortured Decent Guy or Pragmatic Bastard is right. Normally I’d bet on the latter, but this being TV, you never know.

-“The Compromised Compound” sounds like a Lemony Snicket book.

-“Abigail”? Like Bray Wyatt’s ghost sister? Something about that name seems to work for people writing stories of the dead.

-Is KFC really served well by commercials that compare eating their food to zombies gnawing on human flesh? And can we get Walking Dead kids’ meals now? I want a cheap plastic Rick that just yells “Coral!” over and over.

-Suicide by running into helicopter blades is the highlight of this episode so far.

-“It’s all right. They’re slow.” – Devious Guy will come to regret that line. If not now, then next season.

-Travis, there’s no time to save everyone! You’ll just have to be a Tortured Soul some more! But you’re good at that.

-Save the junkie and the Devious Guy, and let the dead through. Not a good trade, longterm.

-Devious Guy’s name is Strand, apparently. Which is ironic because he did not “strand” Nick. I get it.

-“I know this place is overflowing with zombies and all, but I want to risk everything to see my dead, infected mother.” Ummm, no.

-“A home on the water.” That was the plan in Zack Snyder’s Dawn of the Dead, of course.

-Guys, are we forgetting that whatever “Cobalt” is is gonna kick in around 9 a.m.? [“Yes, we are forgetting” – the writers] Hurry your asses up!

-“We must go now!” – Thank you, Salazar. Only here comes Hatosy to kill you.

-BANG! And suddenly pacifist Travis loses his shit. Score one for assholery over compassion.

-And now we mirror the intro of the episode, by copying the opening of The Purge: Anarchy. Same bridge and everything.

-This is why the LA river has such wide banks. For movie and TV getaways.

-Strand owns the only building in LA with a generator, I guess. And nobody managed to hop his fence.

-Metaphor! Being in a zombie apocalypse is like being a drug addict!

-Is this the only Talking Dead that has aired after Fear? Does that mean even Chris Hardwick’s having trouble being interested?

-Welp, now Travis’ ex-wife problems are all gone. And Pragmatic Bastard wins out.

-We’re about due for Big Cliffhanger, no?

-Or just a big long pull-out, whatever.; with a pan into the ocean for no reason. And nobody ever saying what Cobalt was – I guess that was just another name for evacuation. And not the bowel kind.

If the show had BEGUN with this episode, it might have been a lot better. But more expensive.

Who’s tuning in for season 2?