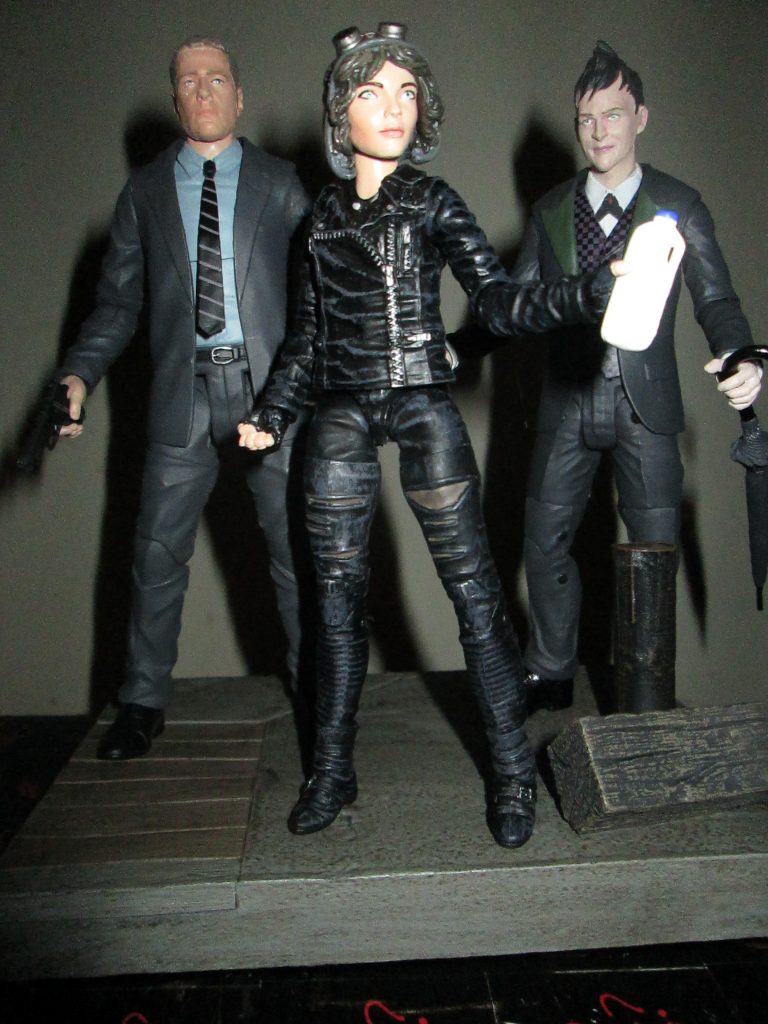 I imagine Gotham is a bit head-splodey for the merchandising folks at DC. On the one hand, it’s a Batman-thing, and they know – or think they know – that every Batman property can be wrung dry until George Clooney shows up. On the other, it’s a Batman property without an actual Batman in it, featuring major characters in fairly nondescript clothes.

The solution, as McFarlane Toys figured out when they did The X-Files movie, is to recreate specific scenes using diorama bases, making the figure just part of the equation. As such, it makes sense for DC to turn to juts about the only toy company that still does that on a regular basis – even if said company is known primarily for doing business with Marvel.

For the most part, you have to be a fan of the show to want to get these figures, unless you’re looking for normal humans to take place in larger displays. I say “for the most part” because there is a pretty big asterisk coming up. You’ll see. 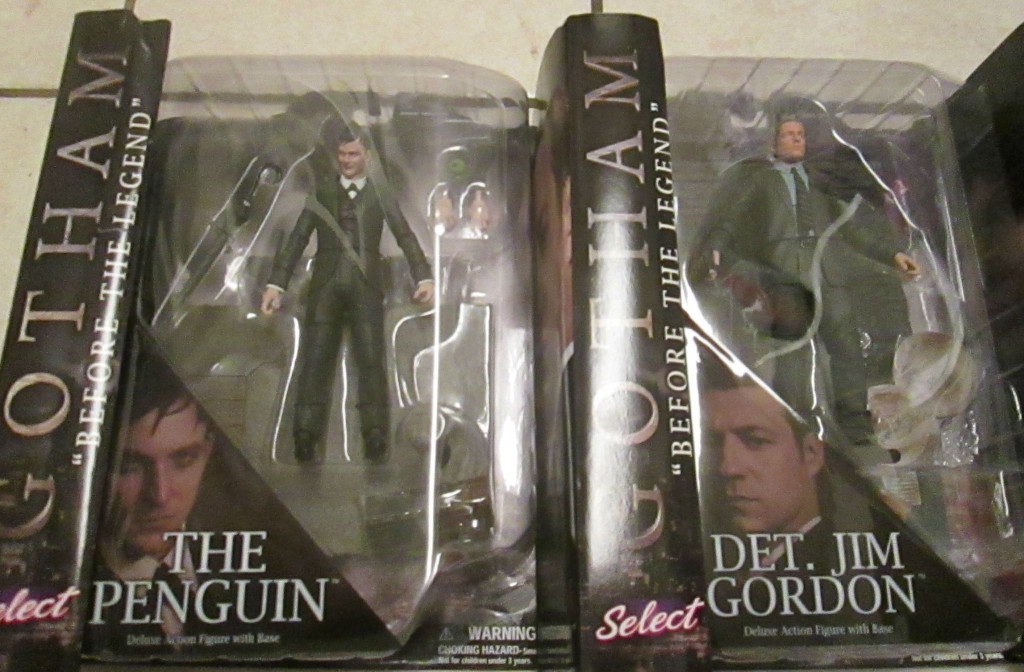 The figures come in the standard Diamond Select packaging, that’s uniform across the board on all their lines, which is nice for collectors with shelves. Toys R Us also has versions of the figures without the diorama bits, and an exclusive bloody Penguin was sold at this past year’s Comic-Con sans base. 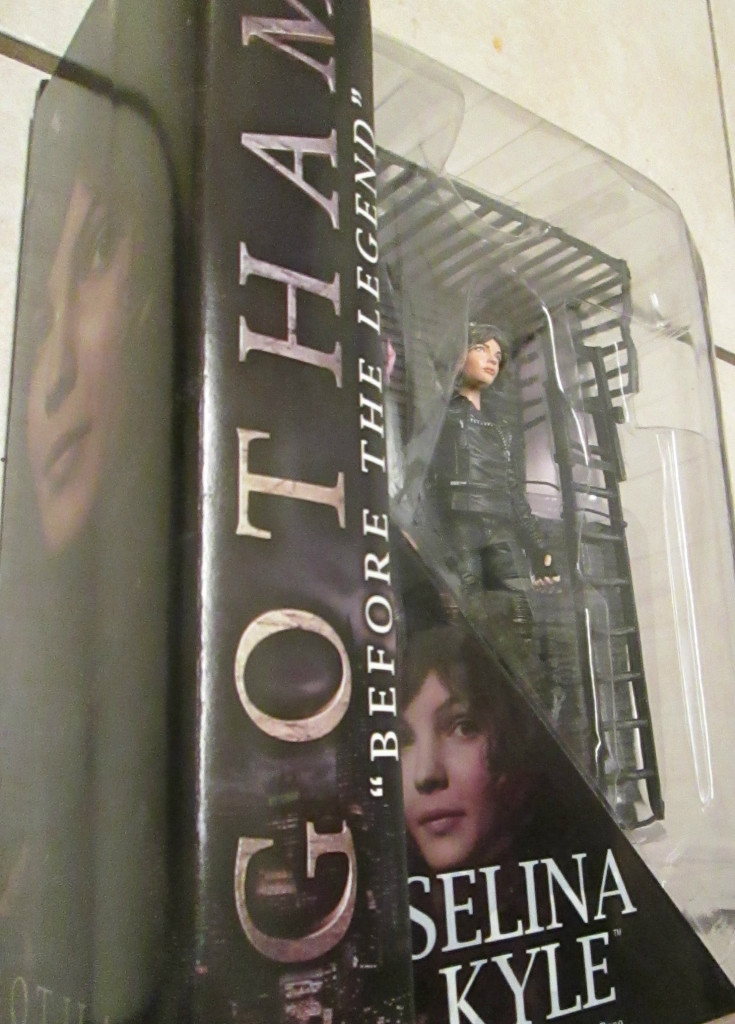 A booklet that comes with the figures shows all three series 1 characters, plus the Gotham Minimates, who are a more unexpected selection. 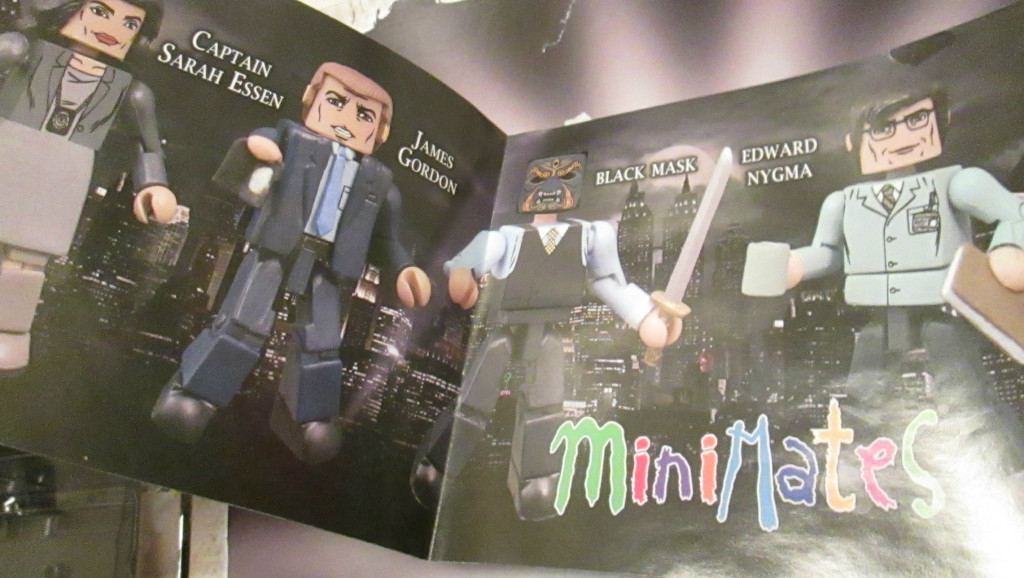 Selina Kyle comes with a base that can be used by itself or in combination with Jim Gordon’s. Articulation on her includes a pseudo-ball-jointed neck (it’s more of a hinge-pivot combo, and slightly awkward, which is true across the board with these figures), pivot-and-hinge ball shoulders, elbows, wrists and ankles, true ball hips, upper thigh cuts, double-knee, cut waist, and lower calf cuts. Most of her joints are the clicky kind, but she’s surprisingly easy to stand and pose. 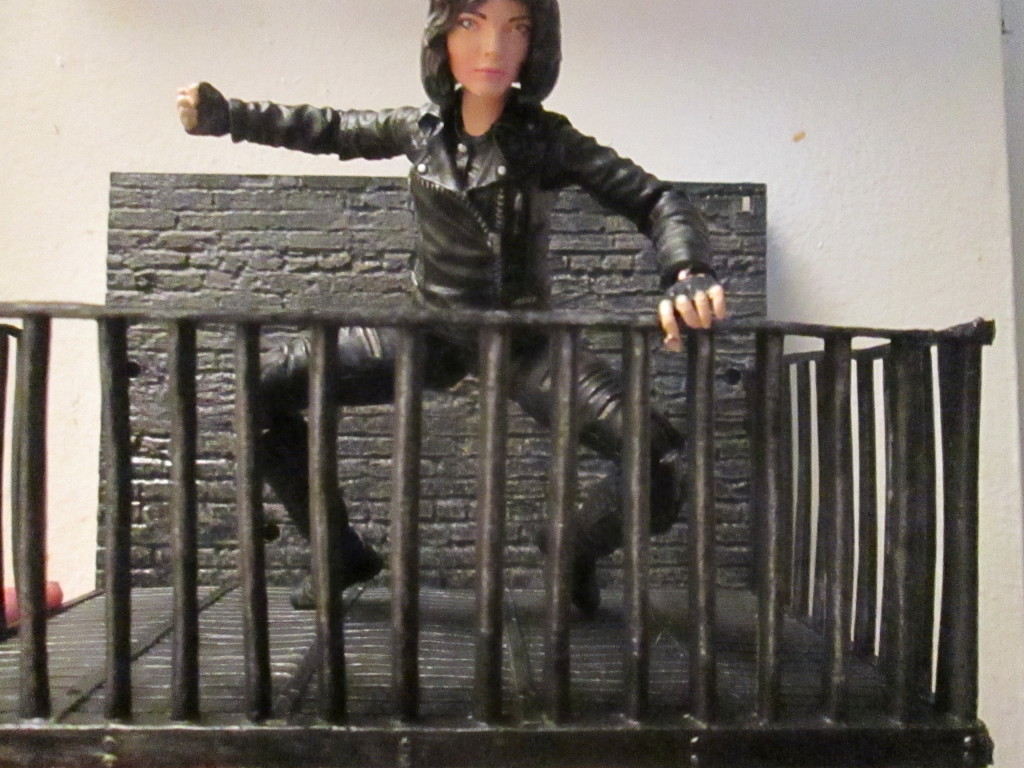 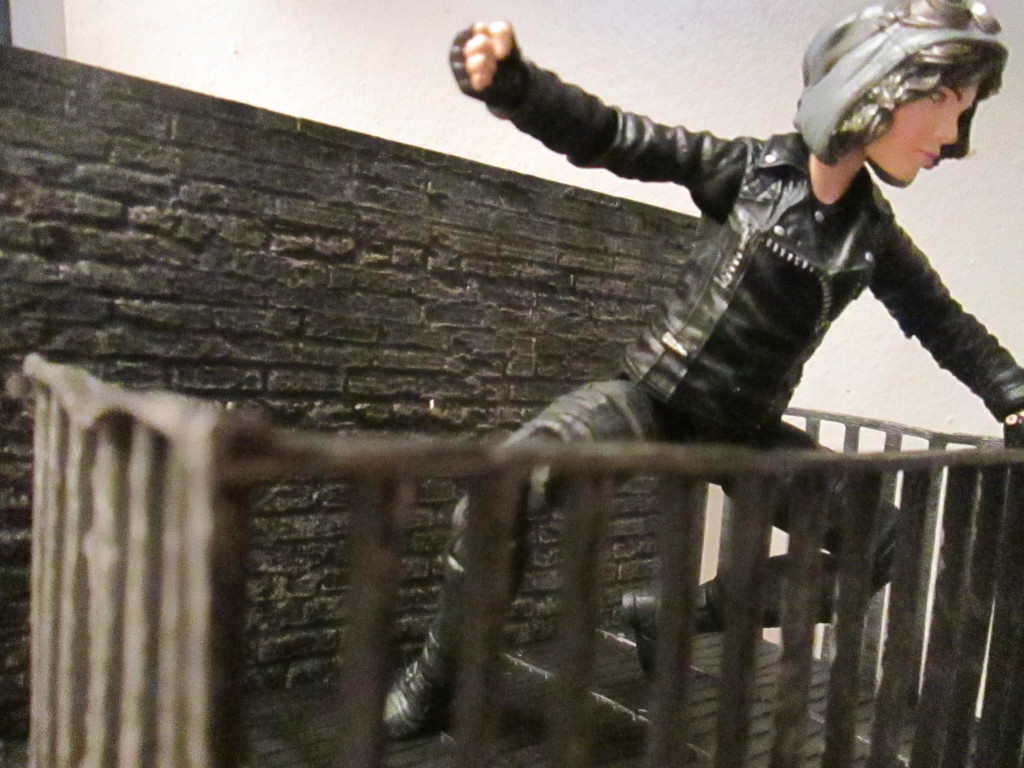 She also comes with some stolen milk, but nowhere near enough for my coffee… 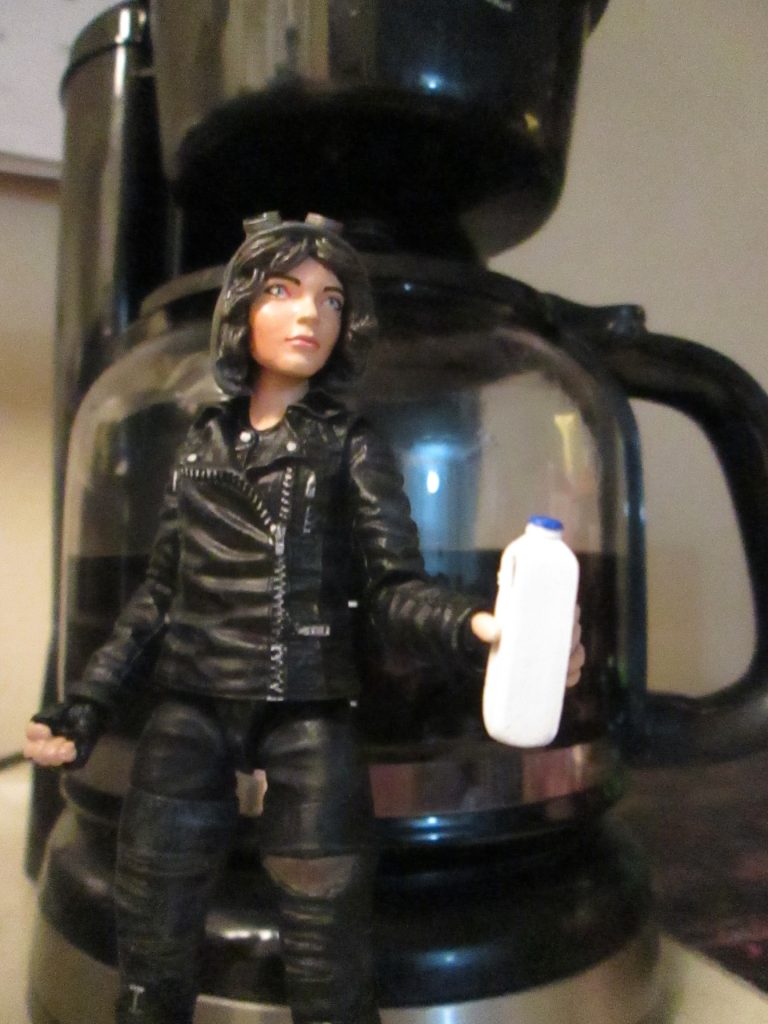 In addition, she comes with parts to attach to Gordon’s base, including four nail-like things that I can’t figure a use for. They don’t fit in any holes I can find.

Oh, and the photos don;t show it well, but her head-goggles do have a subtle, shiny green tinge to them. 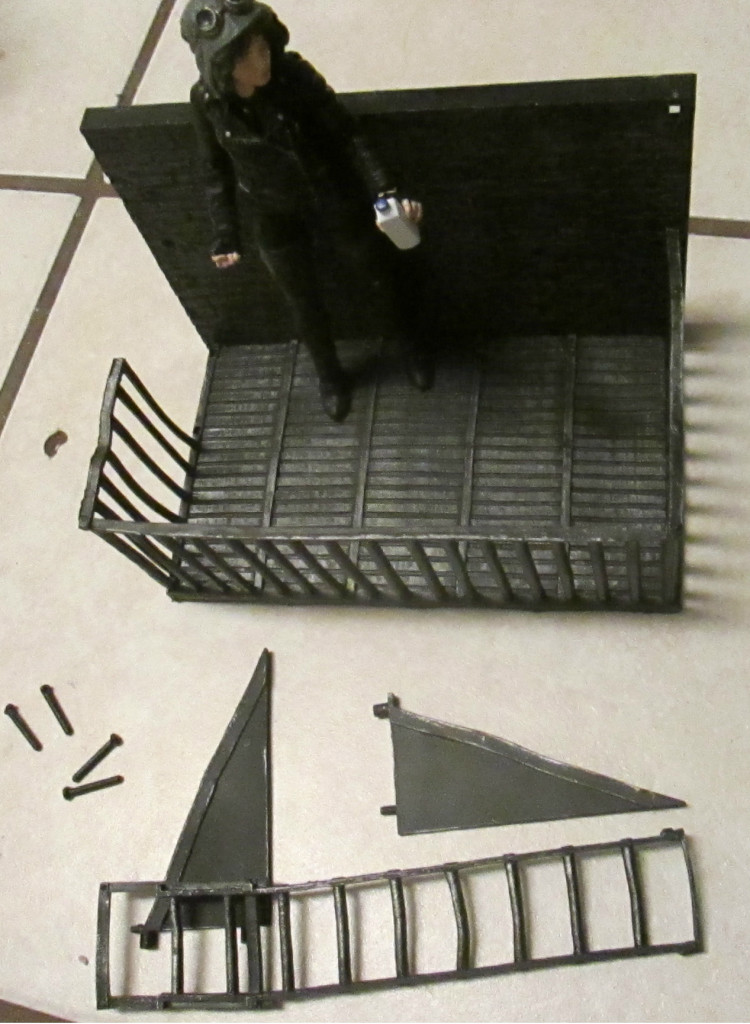 Gordon comes with a base that, frankly, looks stupid without Selina’s attached. I guess they figure she’s the more popular toy, and if you buy him, you’re definitely getting her. The trash cans and box are sculpted on, and the sole foot peg is in the middle of what looks like a puddle of urine, for that authentic Crime Alley feel. 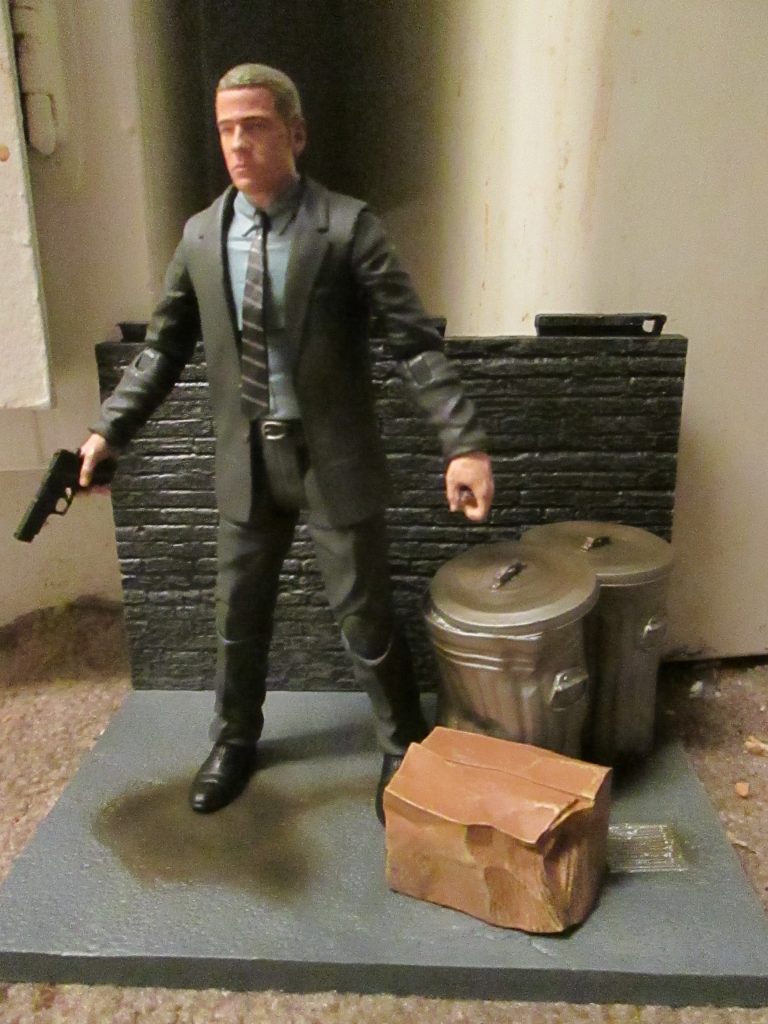 Gordon has most of the same articulation as Selina, except that he adds a mid-torso ball joint, his hips are hinge-and-pivot, and he does not have the lower-calf cut joints. Despite being the most normal-looking of the three, he is the hardest to stand up, possibly due to slightly looser ankles and a heavier upper body – he’s mostly a harder plastic than the other two. His sole accessory is his gun, which is clear-elastic-banded to his hand. 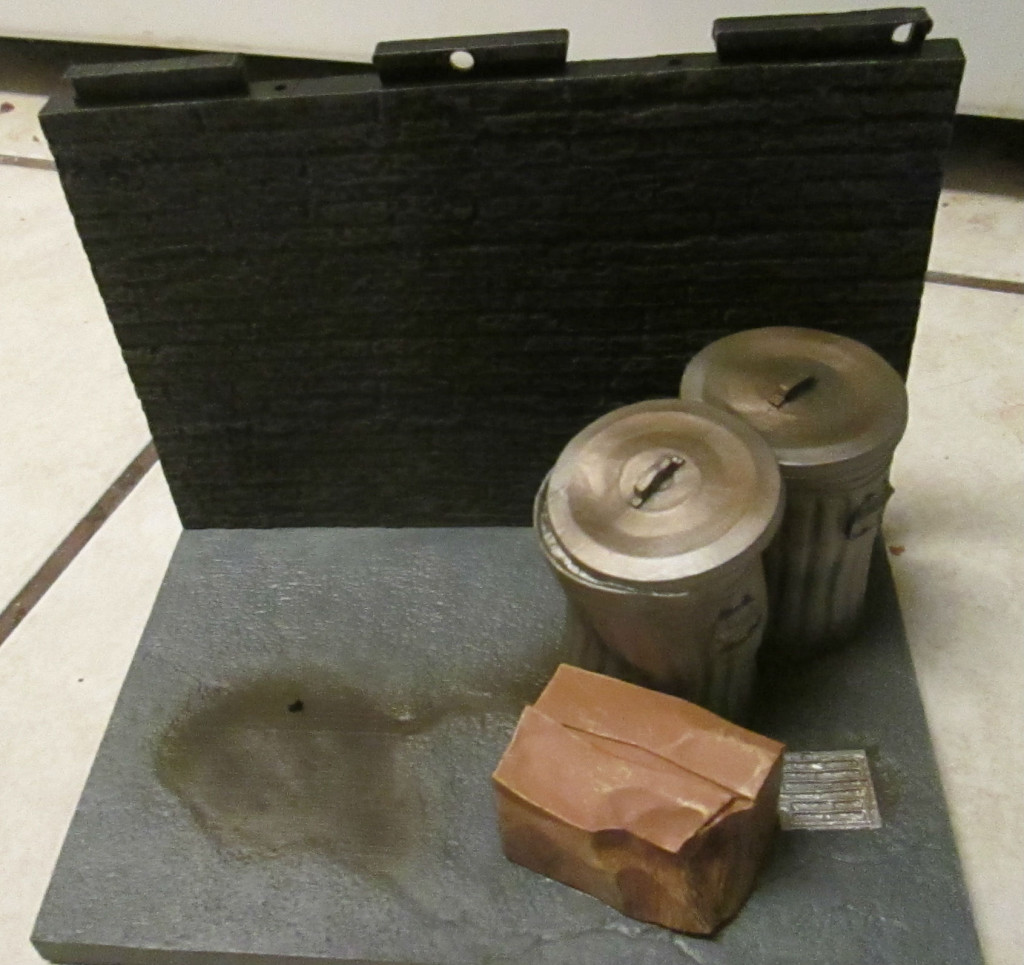 The back of Selina’s base also features a hook to hang it on the wall – either by itself or attached to Gordon’s. 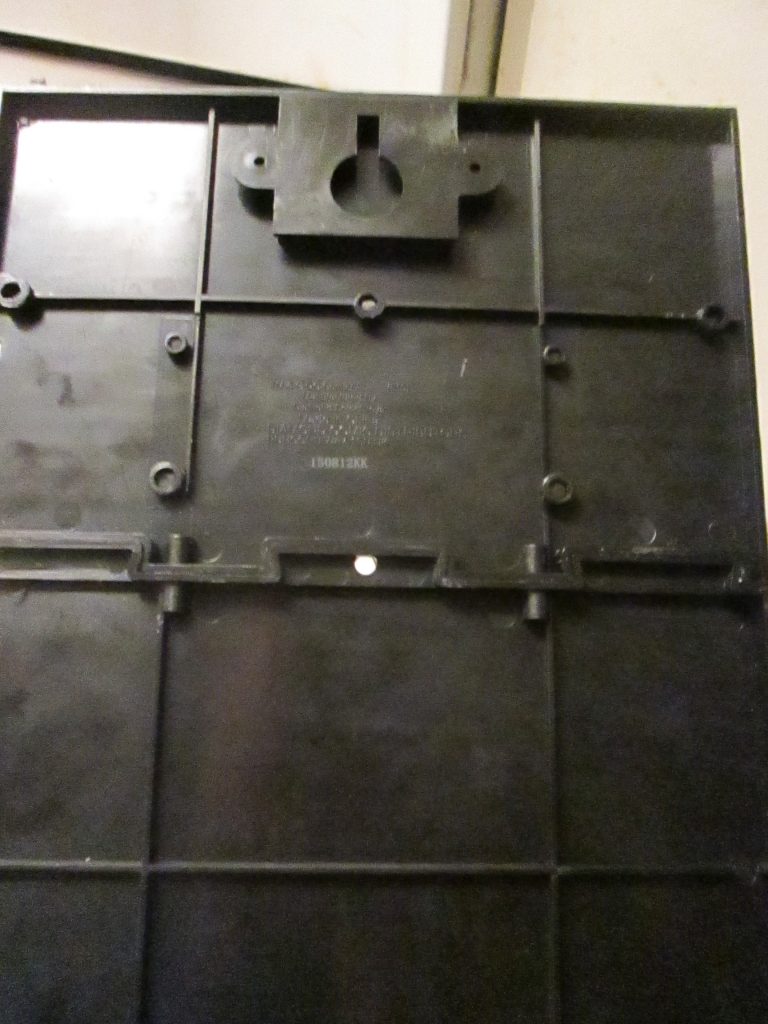 When you do put them together, the floor of her piece has to be moved higher up the back wall. There are no instructions included, so it takes a moment to figure this out. Then you plug the bracers included with her underneath, and clip the fire-escape ladder to the side. Et voila! Crime Alley. Not to scale. 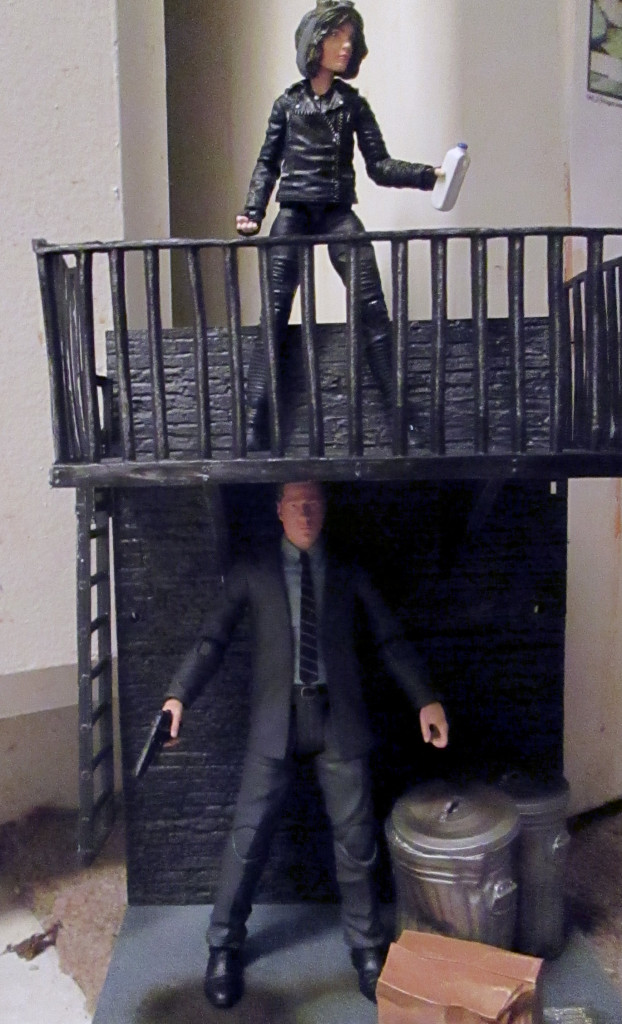 Remember that big asterisk I mentioned before? It’s this – even if you’re not a fan of Gotham the series, a diorama of Crime Alley in Gotham City might be of use to you in other ways. 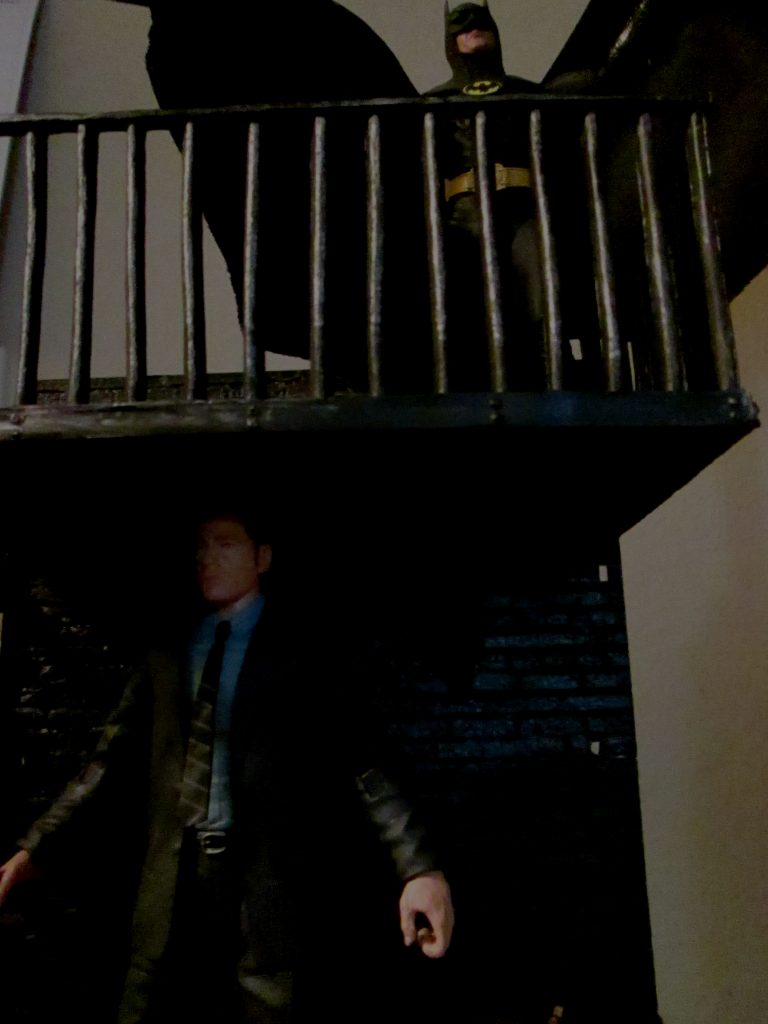 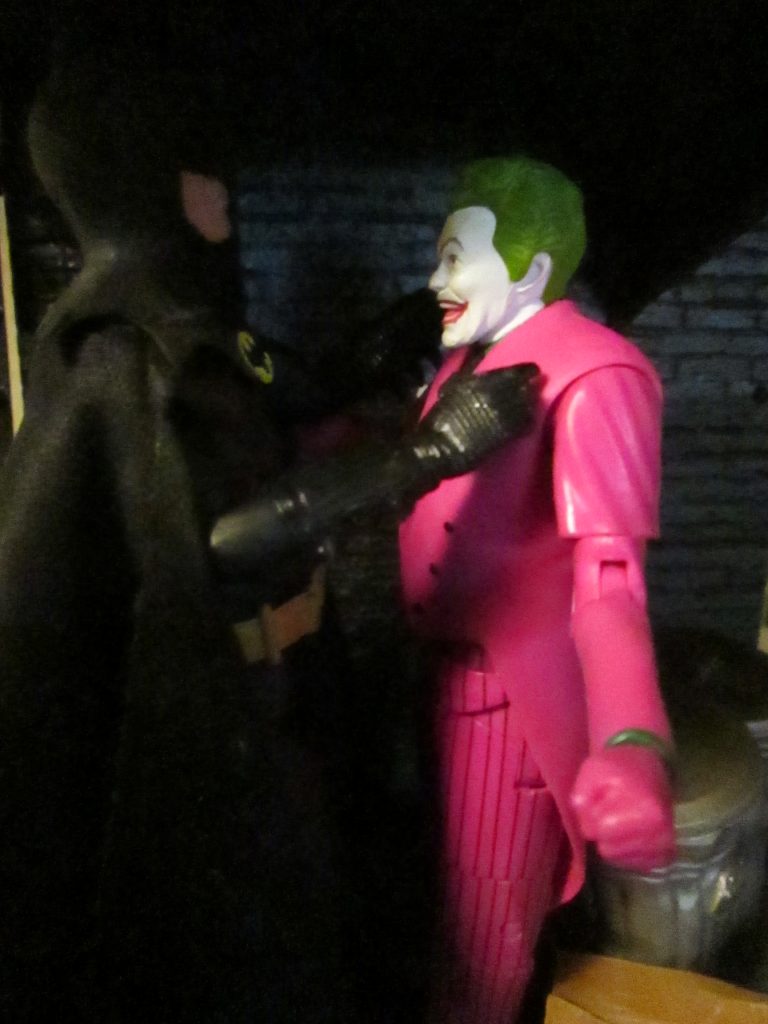 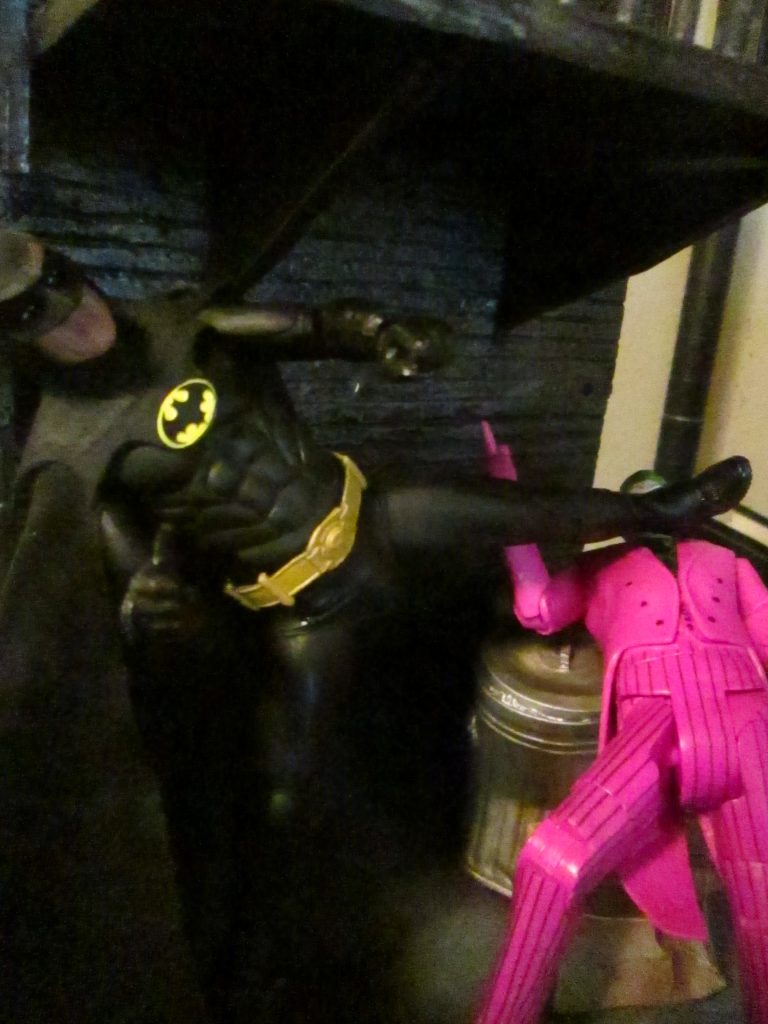 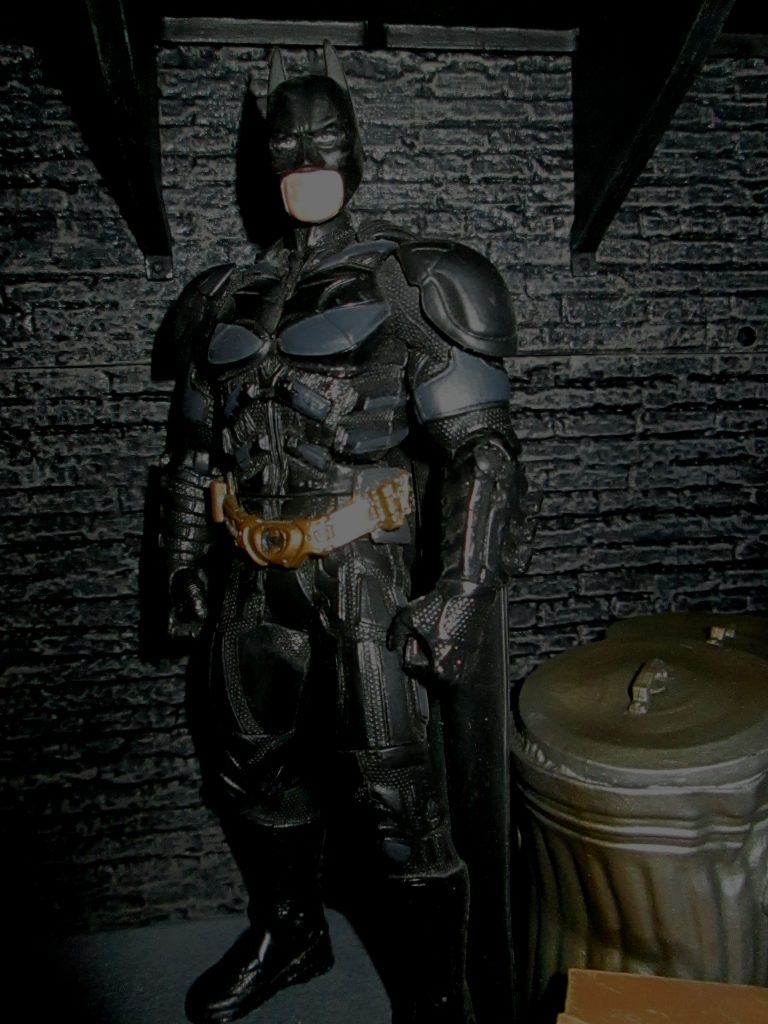 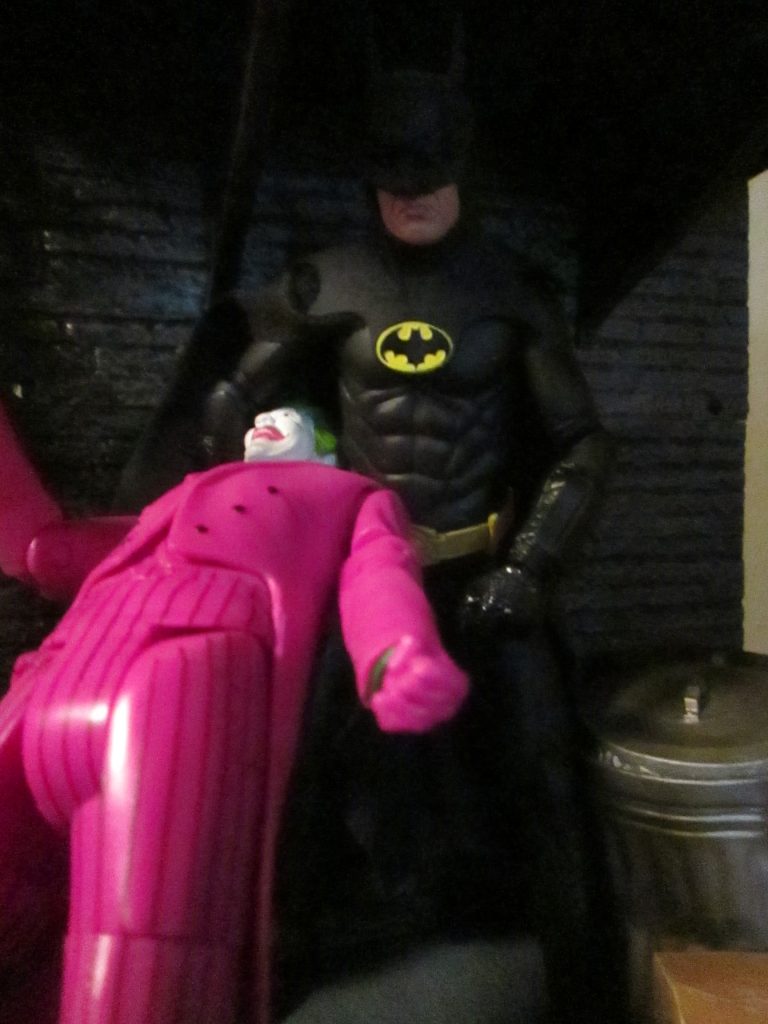 Penguin’s base is a bit of a bummer by comparison. not even a foot peg. I believe it represents the dock where Gordon was to shoot him. 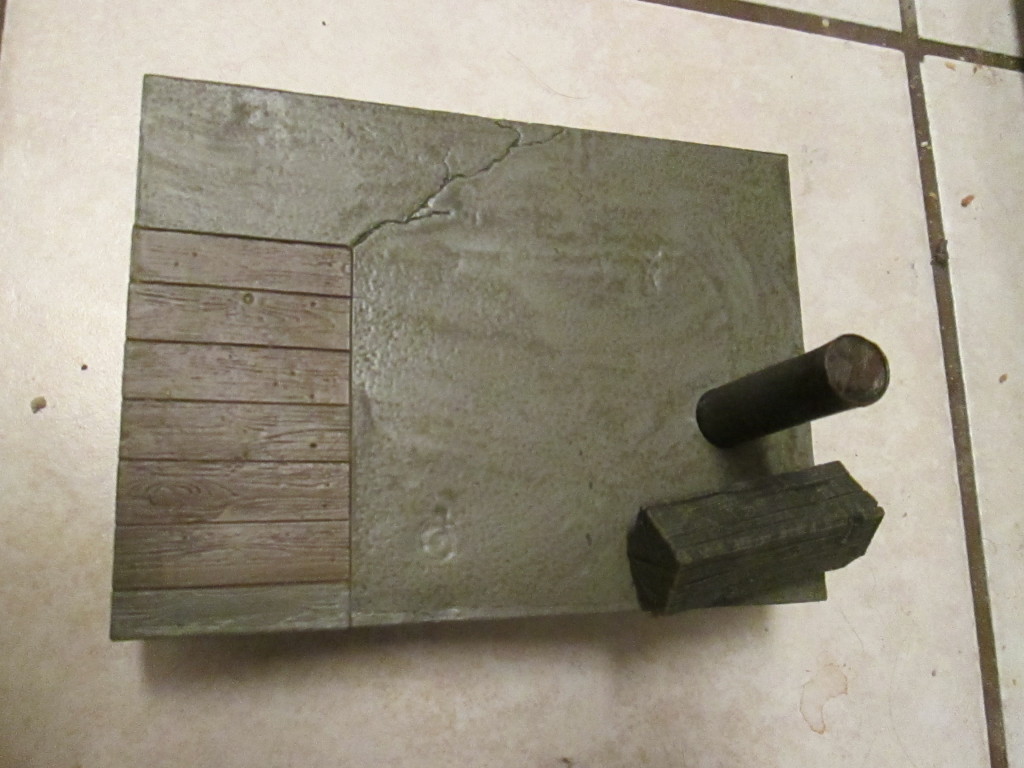 Oh no! A Kaiju is emerging from the bay! Watch out, Oswald! 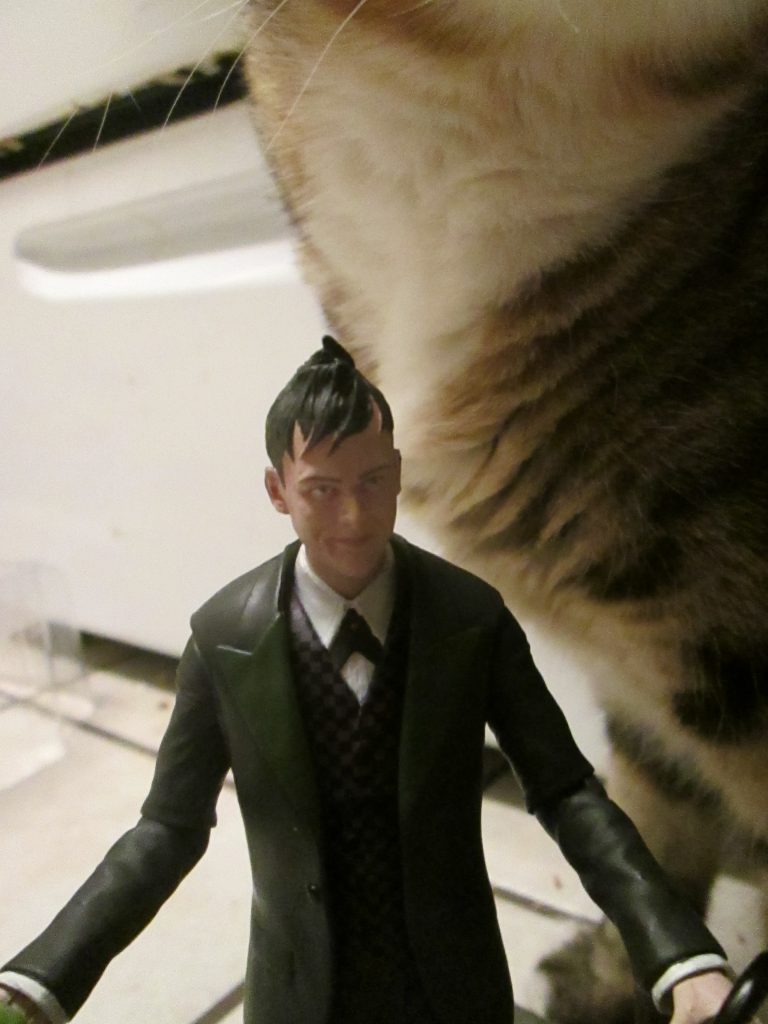 That was a close one. 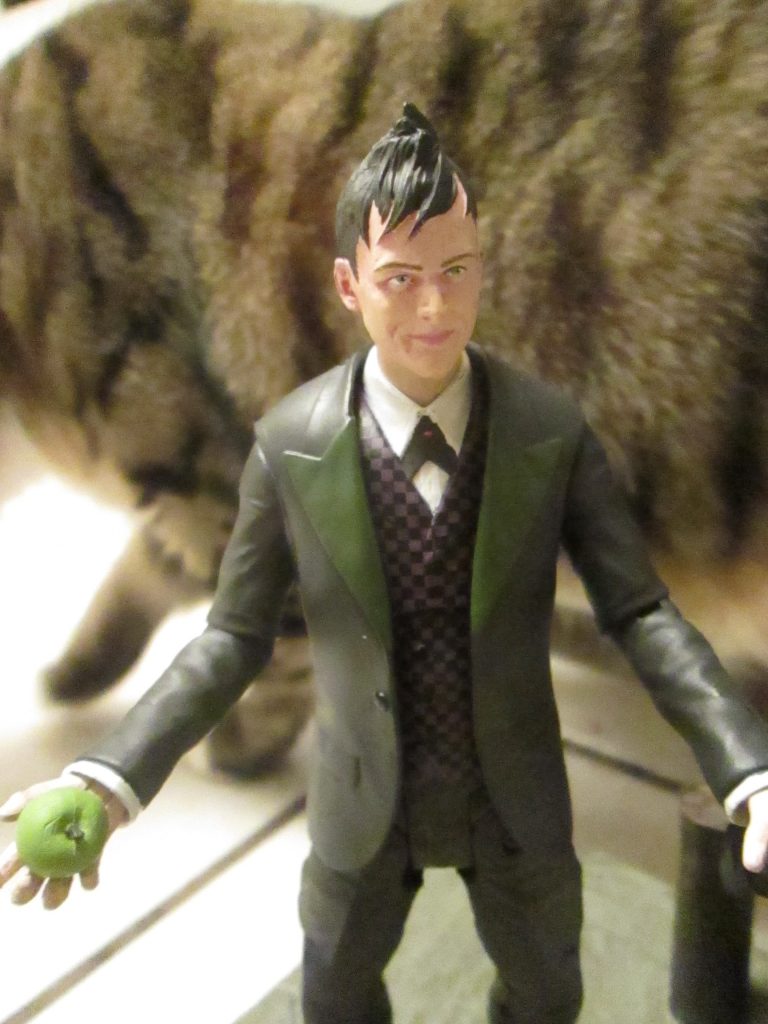 Oswald comes with an apple, an umbrella and alternate hands, though the latter are a bit pointless – the left hand that holds the umbrella best can be switched out for a left one that holds the apple best, but really, the apple will fit in the right hands too if you squeeze it in right.

He has the same articulation as Gordon. but the neck is most frustrating on him – I’d really like to cock his head to the side quizzically, but I can’t, because it’s not a true ball joint. This also means he will always be looking down slightly. 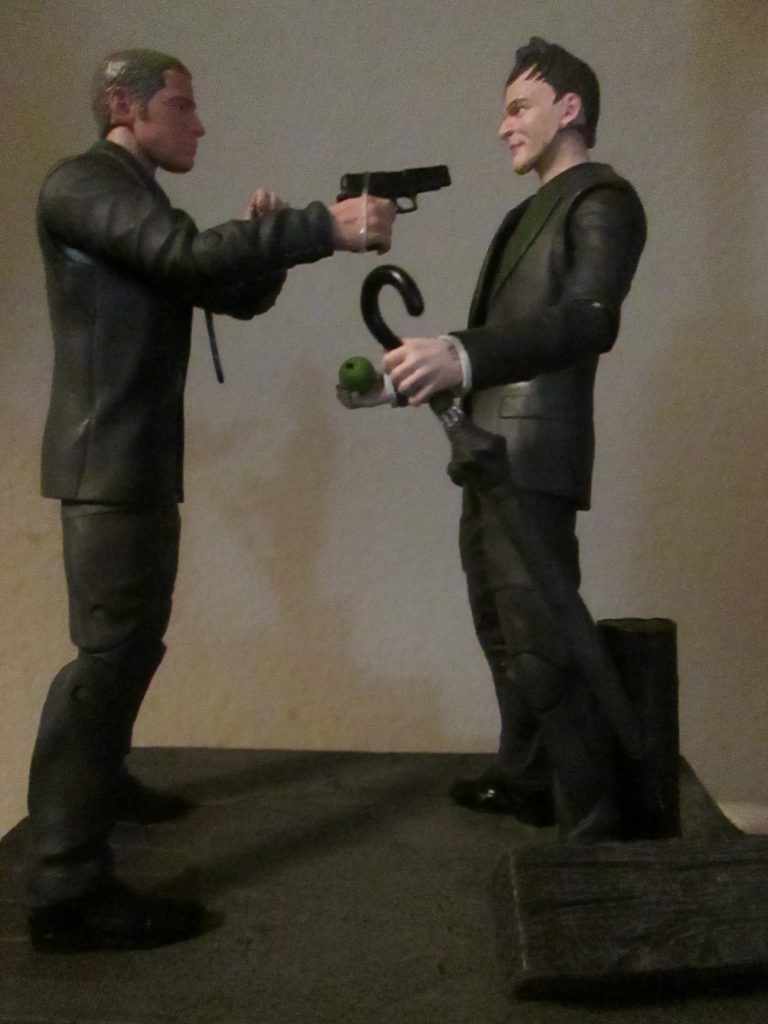 It’s a bummer that he’s the least exciting of the figures seeing as how he’s the best character. Teh sculpting is by Gentle Giant, but I feel like a more goth paintjob was needed. 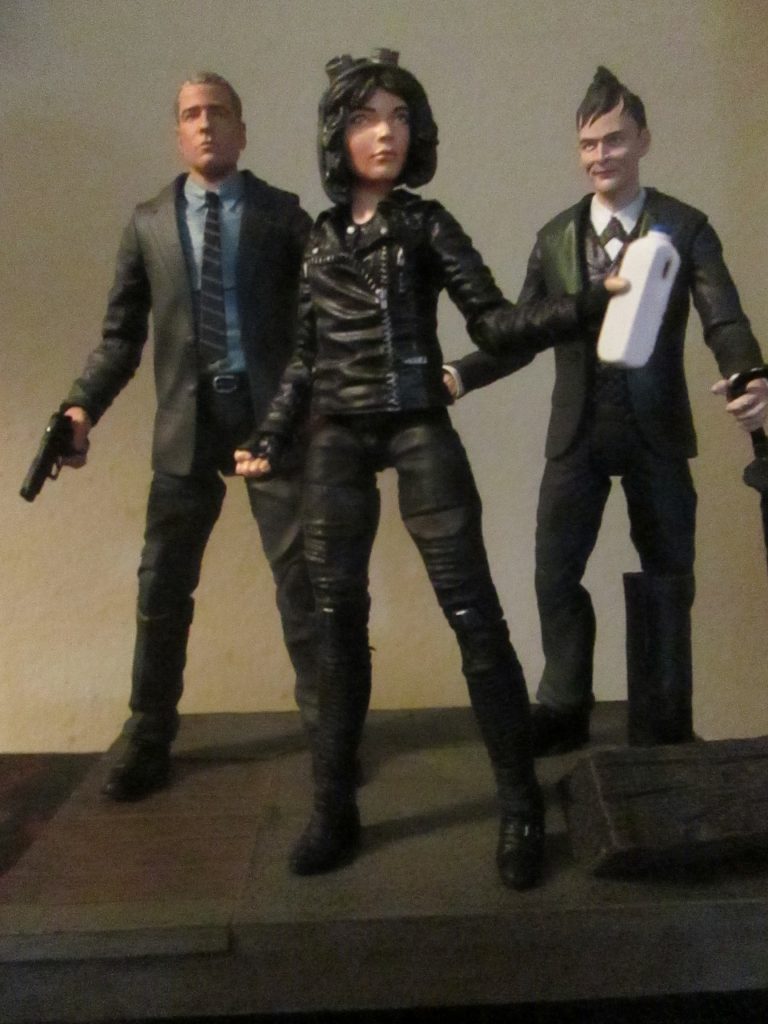 One thing I did notice is how lighting affects perception. Like, with a flash on, he just looks sad… 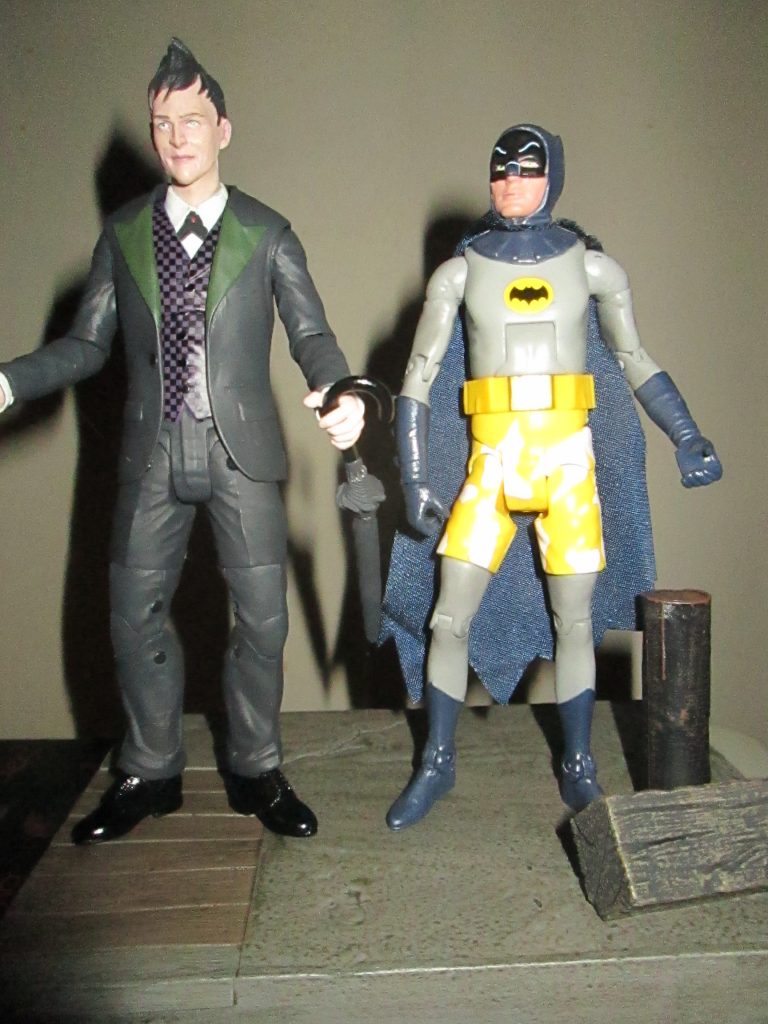 …but add shadow, and he becomes devious. He’ll have to be, to get out of that swimsuit contest with Batman. 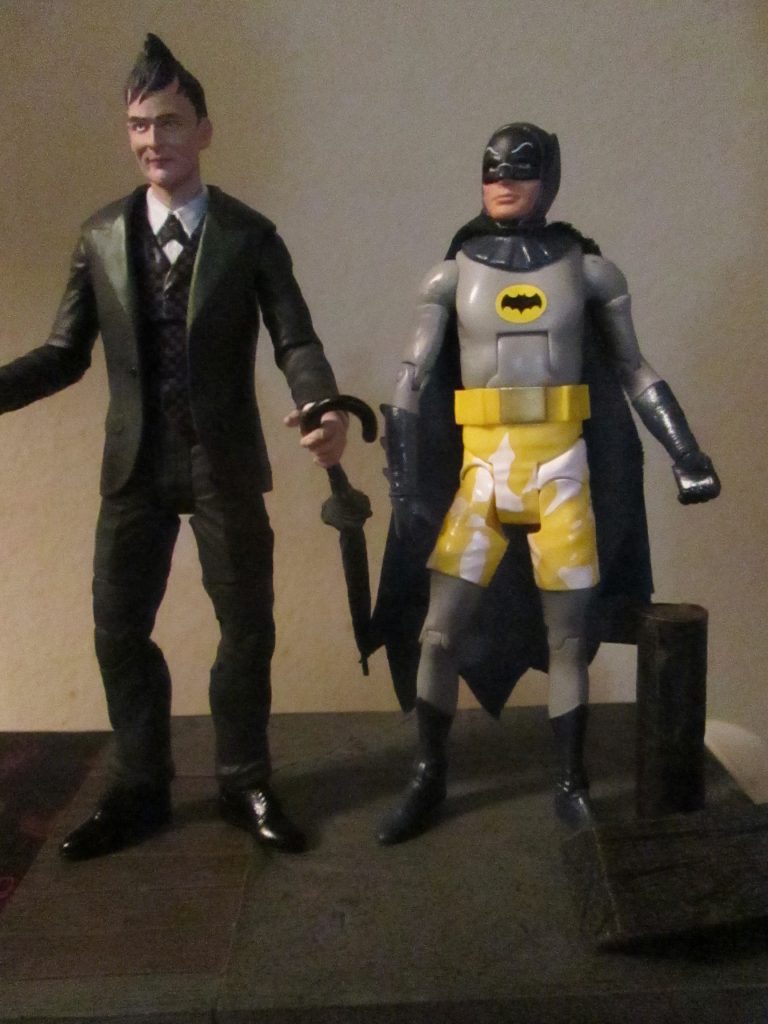 At $25-$30, these are great value if you like the show, though I hope they revisit Penguin and do a newer version that really does Robin Lord Taylor justice. Jim and Selina are fine figures by themselves, but the diorama really puts them over the top – if you have any interest in these at all, that should be what seals it. NECA may have just announced DC figures in this scale that are bigger fan-faves, but they’ll never make a Gotham street scene for them to stand in. This is the one.

Series two, unfortunately, looks less interesting diorama-wise, with Ed Nygma coming with his desk, Alfred with a fireplace, and Bullock with a lower half of an alley to attach to Gordon’s. Without another upper part, that’s going to look weird, but I can’t imagine who such a thing would come with. Young Bruce, maybe? 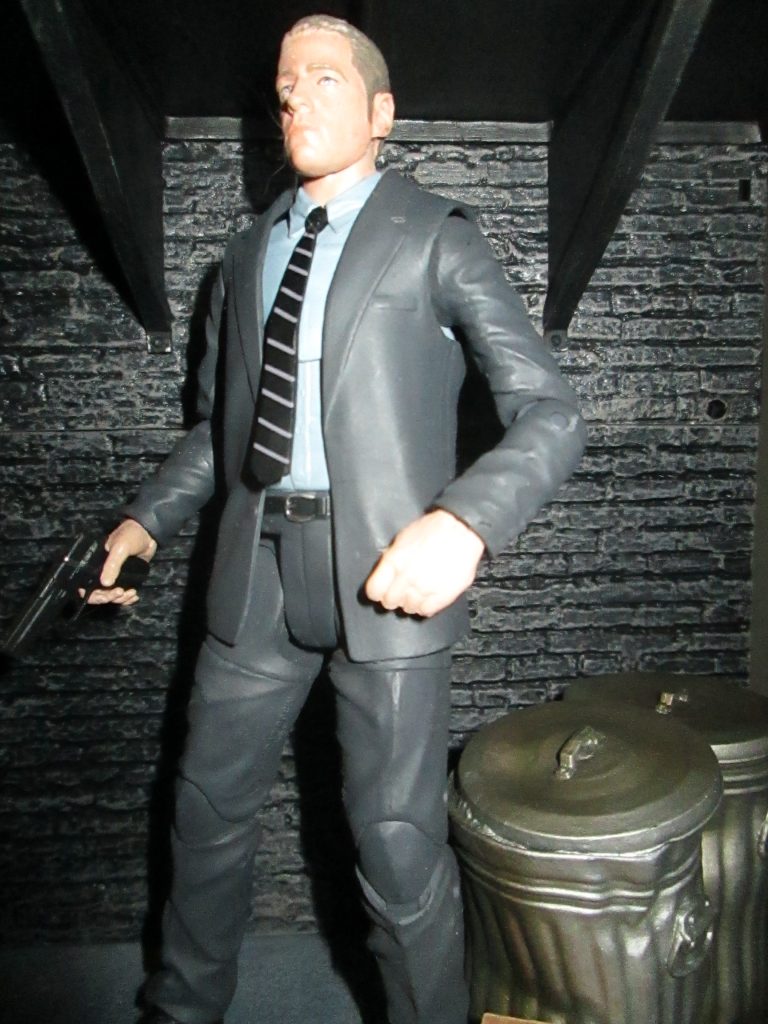