Menu
Home
>
Columns
>
Top-Down Smackdown: What It’s Like to Attend WWE “Hell in a Cell” Live

(In part, an experiment to see if Tuesday is a better home for this column than Monday) 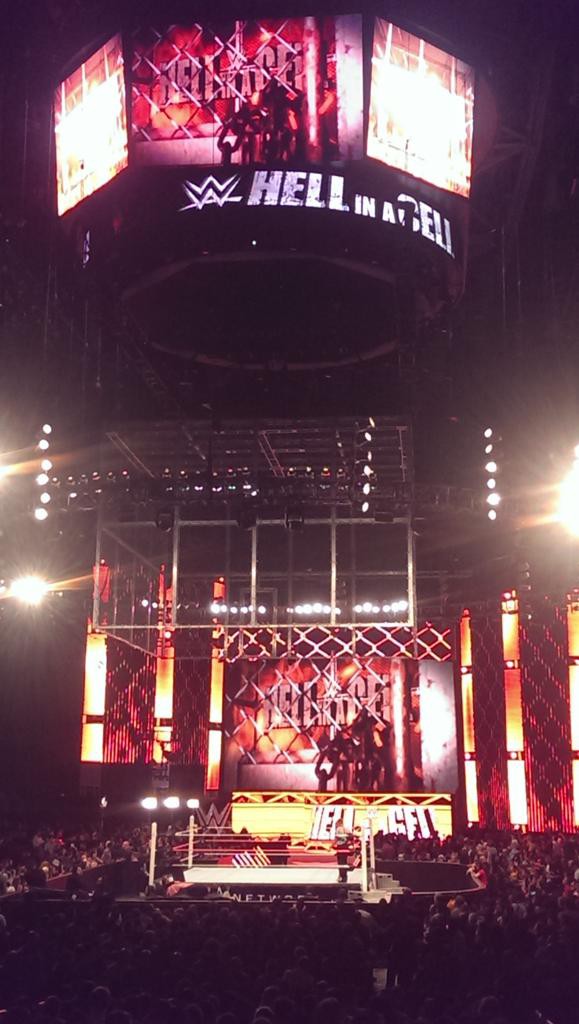 It occurs to me that in the last couple of decades, we’ve seen movie theaters really work hard to try to reclaim declining audiences by making the theater experience better, from simple things like stadium seating and digital projection to better concession food and chains like Drafthouse that aggressively police rude texters and talkers (yes, the prices have gone up too, but thankfully the days when I could all but guarantee a movie at the local AMC would be out of focus are mostly behind us, even if they still forget to shut auditorium doors). And yet we hear that WWE live-event attendance is down – and I suspect the same is true for sporting events – and there seems to be little similar incentive to improve that experience to better reflect customer demand.

Granted, WWE and other touring companies don’t necessarily have much control over this – it’s the arenas themselves that facilitate the experience. And in some areas, they are learning: for this past weekend’s Hell in a Cell, Staples Center actually opened enough doors in a timely fashion to allow most of the crowd to get inside by opening bell time. This seems like crowd management 101, yet it has taken them well over a decade to figure it out.

Seating at these arenas is more akin to the airline experience than the AMC, with seat designs that are oblivious not just to the plus-sizing of America, but our general height advantages too. Staples Center has only been open 16 years, and really has little excuse here – there’s simply very little legroom, and unless you have an aisle seat, getting to and from your assigned location involves tripping over everyone else’s legs, and then sucking in your arms into bad posture so you can all somewhat share armrest space.

Based on my experience at a recent house show, I decided to go all the way up to the cheap-seat level to buy food and souvenirs, though for a sold-out event, there is less advantage to this. And when I finally got to the front of the line at the merch stand, this bombshell was dropped – the upstairs vendors had not been given any XXL shirts. I don’t wear a XXL, but a lot of fans do – consider that people in the cheap seats are statistically more likely to be lower-income, lower-income people are statistically more likely to be overweight, and anecdotally, all this seemed true. And let’s talk about those cheap seats – they’re way up in the rafters, and tiered at a steep angle. Julia won’t sit there any more because she’s afraid of falling, and you don’t have to be Jimmy Stewart to feel the vertigo. I’m not saying cheap seats needn’t be high up in the back, but they maybe should recline a little bit. Now, another “bonus” at the merchandise stand – over the years, WWE has started to actually offer bags when you buy their stuff. Well, this is L.A., and the city has determined that plastic bags should be taxed ten cents. Agree or disagree, whatever – but can we come to a consensus that not giving any bags to the upstairs stands only is bullshit?

Anyway, I got a shirt that featured the wordiest match description ever: 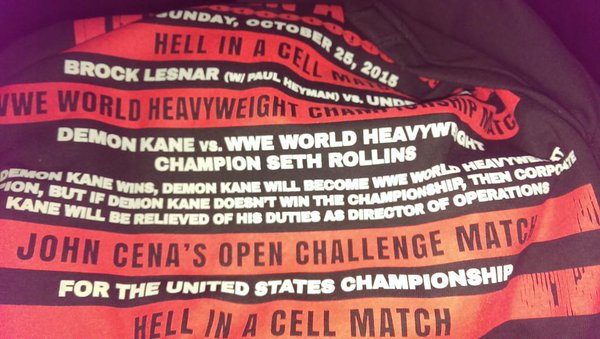 Then there’s food service. I have to assume Staples trains its employees to take their time, and not comprehend the fire that ought to be lit under their ass to serve people before bell time. With more food options than the usual basic hot-dog ‘n’ popcorn counter, they’ve made some strides, and having a separate bar that is just a bar separates some of the beer-only crowd, but you’re still likely to miss an entire match waiting in line just to get nachos for a wife who had a panic attack on the way in because the AXS app that contained our e-tickets kept crashing, so we had to go in via my email account and have the ticket lady enter the numerical code into her scanner manually (this is still better than that one time I came all the way downtown with the wrong paper tickets, and had to take a train and a taxi home and back again).

I paid about $100 each for our seats. They had a very nice view, but legroom and the ability to get concessions in a timely fashion would have improved the experience by a lot. Ease of snacking and more room for fat people would also encourage more money being spent on food. Should be an obvious win-win. I noticed one of the WWE merch stands was experimenting with letting fans order via an app and just picking up there – a nice touch, though you run the risk of their discovering that most everything you have on-sale is actually cheaper at WWEShop.com. At least everyone takes credit cards now.

But aside from all that, how did you like the show, Mr. Lincoln?

Well, it was pretty fun, all in all. The crowd were pumped and not necessarily predictable in reactions – Cesaro, for example, is over HUGE with this audience. John Cena was practically booed out of the building, and from our perspective it even seemed like he worked the match as a bad guy. Certainly the returning Alberto Del Rio was way over with the mostly Latino crowd, even though many of us had expected his mystery slot on the card to be filled by Daniel Bryan, The Rock, or even possibly Kurt Angle, all of whom were rumored to be in town. When Zeb Colter came out there was audible disappointment that we might be getting Jack Swagger, and real cognitive dissonance when the guy whose whole gimmick had been based on hating Mexicans suddenly reversed course.

My skepticism about New Day is well and truly done – what initially seemed like a really cynical gimmick by Vince McMahon to form a team that might as well have been called “The Black Guys We Don’t Know What to Do With” has become transformative thanks to the degree to which Big E, Kofi and Xavier have embraced and evolved what they were given. From broken trombones to seemingly arbitrary unicorn imagery, they are always coming up with left-field stuff to entertain, and are quite rightly atop the tag team division.

I mean, you have to love that they’re actually selling this shirt (albeit not at the event): 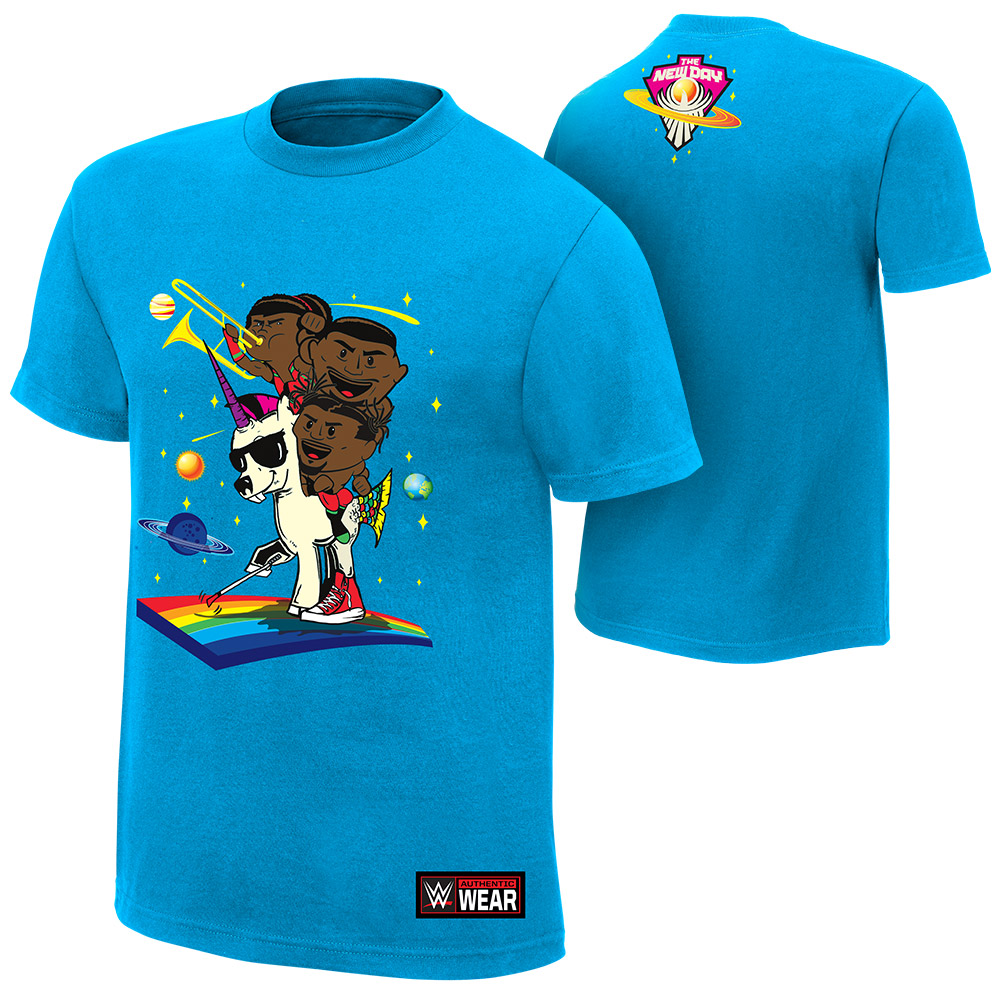 But oh, the Dudleys – hey WWE, you might want to change that theme song which jokingly refers to them as “a little disabled.” Seriously.

One thing people miss about the Dudleys, and other veterans, from a TV viewer perspective, is that what seems on the show to be stale shtick plays differently to a live crowd. Just as the audience member seeing the Rolling Stones live for the first time wants to hear “Satisfaction,” so too does that kid at his first WWE show want to be able to yell “Waaaazzzup!” and “Get the Tables!” It’s done for the people at the event, not the ones in living rooms globally. 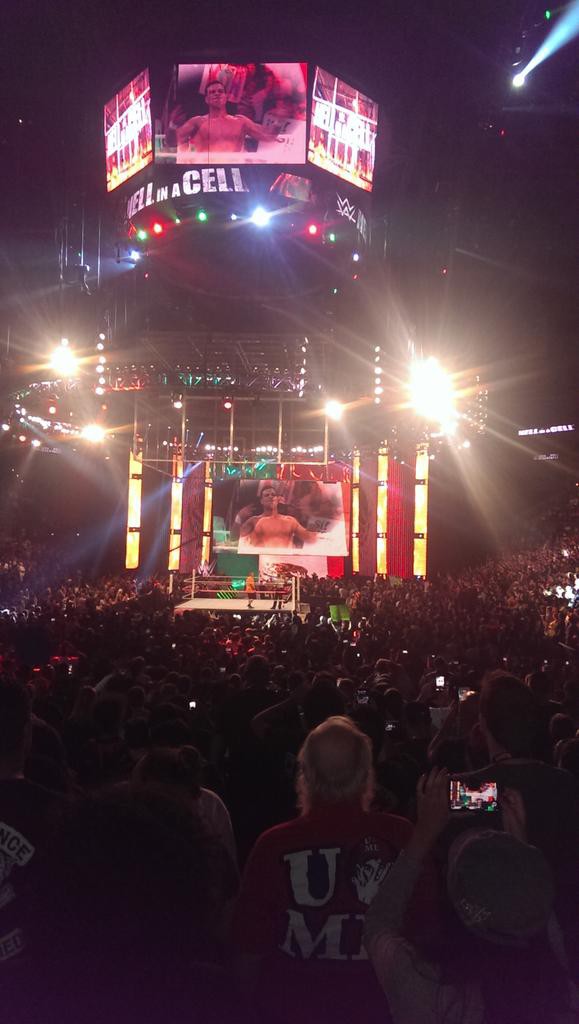 The cell match between Roman Reigns and Bray Wyatt happened when I made my first beer run (We could use “beer guys” walking the aisles, who’ll take credit cards. Get on that, somebody), but what I saw of it seemed to do what it was designed to – get Bray over as a guy who can wrestle without interference, and Roman as a tough badass who can go through tables. Though there was a divided “Let’s go Roman/Roman Sucks!” chant, the supporters outweighed the haters. WWE fans are a big family, though – even arguments over who you like are friendly, and conversations can be had with complete strangers. Julia got a lot of amused stares for yelling psychotically at Kane to do better.

Divas match – eh, whatever. There are many divas I do like to watch in the ring, but neither Bella is one.

Kevin Owens was disappointingly quiet against Ryback – based on seeing him at a house show a few months back, I thought his whole gimmick was to yell during a match. I like his persona, though – the hard-working family man who also happens to be an asshole isn’t something I’ve ever quite seen before.

I told Julia that Seth Rollins would win the title match because Kane never wins, but I was still disappointed that he went down so easily. As I wrote a while back, his character, while presented as the most intimidating thing ever, is never borne out as such in the storylines.

Undertaker versus Brock Lesnar wasn’t quite like their matches of old, but the Deadman can still wheeze to life occasionally, and Brock’s bleeding made him look like Red Rooster 2015. Not sure what ripping the padding off the ring achieved – don’t we want people to think the ring’s not padded? – but it saved them having to do cage bumps.

Also, nice fakeout promoting an Undertaker-centric Survivor Series to make us think he’d win this one. Instead, looks like some sort of four-on-four with the Wyatts will happen, presumably lengthening the no-sell streak of Braun Strohman, who seems only a couple of years away from becoming a Kane-like paper tiger (though nowhere near the actor that Glen Jacobs is).

I’m not sure last night’s Raw furthered any of the storylines much, but let’s talk about it below. And with the site name change, ought I to change this column’s name somehow to reflect that, or does Top-Down Smackdown still work on its own terms? Do you like Tuesday better, or Monday?