The idea for Carver: A Paris Story has been kicking around Chris Hunt’s head for years, and through his time as a resident artist at the Atlantic Center for the Arts under the legendary Paul Pope, he was able to develop his talents enough to bring the comic to life. He talked to us about the comic, its influences, and the story he’s trying to tell. Click through any of the thumbnailed preview pages for larger looks at the images. 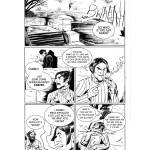 TRV: Carver’s story has been with you for years now. How has it evolved since you first conceived of it?

CH: Well, the book was initially a kind of hopeless romantic story in the vein of Before Sunrise, and I based it closely on my experience in France when I was visiting an ex-lover in 2010. There really wasn’t anything wrong with it in my mind, even now and I was all set to start drawing in March of 2011, but my life took a sudden turn around that time. I ended up losing two of my best friends quite suddenly, and the effect of that was very shocking and in hindsight, pretty traumatic. I shelved the story and any other original ideas for the remainder of the year as I basically just learned to cope with what had happened. For some reason I can’t explain, Carver was the idea that was always in the back of my mind, it was the sandbox I’d go into in my head when my mind would wander back to telling stories. Over the course of some months I began to rebuild myself, and Carver began to rise from the ashes as something else. It still had the original element of the broken man, coming back to see the woman he loved, but it was darker and broader and the unrequited love theme became more an element of the story as the theme of “redemption” really began to take hold.
TRV: Carver himself seems to exist on a kind of continuum of early 20th century adventurers – Corto Maltese is one you’ve cited often, but he seems more…ass-kickingly to the point, for lack of a better word. Are there any others?
CH: Carver definitely is my American Corto. I love Corto. I love that he’s dapper as all get out when he’s traipsing through desert on camels, or just standing on the deck of a boat. He’s European, that’s kind of what I would expect. An American version of that guy would definitely be LOUD and unrefined and as you said, a bit “ass-kickingly to the point,” hahaha.
A lot of things got stirred into the pot when Carver 2.0 began to take shape. Indiana Jones should be obvious I would hope. I wanted to go back to the source of the tough guy, “Man of Action” archetypes though, so I was looking at a lot of early 20th Century strips like Milton Caniff’s Terry and The Pirates and Roy Crane’s Captain Easy. If I had to point to real life figures that in some way came to inform Carver, Ernest Hemingway and Roy Chapman Andrews.

TRV: Why 1920s Paris? It’s a fascinating time for the city, what with it dealing with the aftermath of World War 1 and being the literature and arts capital of the world for a time.

CH: Well as I said earlier, the main reason why it was Paris was because the inciting incident in my life that led to the original version of the story, happened to me in Paris. That’s the really simple answer though I’ve had a fascination with that city for as long as I can remember.
The post WW1 era though is fascinating. Europe itself is rebuilding and settling into the Versailles Treaty, which no one realizes is going to bite them hard in the ass in about 12 or 13 years. Then you have Paris, a place where the German army had come within 5 miles of at one point during the war, and yet two years later, Paris is turning in this insane place in the 20s. You had ex-pat writers and artists of all manner, congregating on the Left Bank of the city, making some of the most important work of the 20th Century, while Anarchists are blowing shit up on the other side of town, and somewhere in between they’re all going to a jazz club, where African American musicians and performers are finally gaining acceptance and validation. It’s just incredible to think of everything that was going on in that city. Frankly I’m stunned that there aren’t more works of fiction — in any medium — to take advantage of this rich point in Paris, and also, world history.
TRV: Stacker’s mask is important – it jumps out at the reader at the start, and it’s called out at the end. Can you talk a little about your design process and what cues you’re trying to signal with Stacker, Carver or the thugs Carver beats the hell out of?
CH:CARVER: A Paris Story is about redemption overall, and the way that I’m exploring that is through this notion that everyone wears masks at some point in their lives. Stacker literally wears a mask and that resonates as villainous to most people, because he’s hiding something in the readers’ minds. What you’ll come to understand though through the arc, is that “Carver” is a mask that Francis wears. He’s hiding something too, which stems from trauma he suffered years earlier in WW1. The irony I’m hoping that will begin to come across is that up to this point, we’ve seen Carver do and say more hurtful things than Stacker. Yet the assumption is Stacker is the bad guy because he looks a certain way.
On a more strictly aesthetic level, I wanted Stacker to channel the villains from the old Republic serials from the 40s. Visually Carver was an amalgam of a young Ernest Hemingway, Pat Ryan from Terry and The Pirates with a dash of Tom Selleck and a pinch of Indiana Jones. With regards to the looks of both Carver and Stacker, I wanted the reader to be able to look at them and immediately “get them.” I knew that most of the book was going to be spent exploring what it costs a person to become a “Carver” so I didn’t want to spend too much time upfront having to explain what each of them were all about. I think based on the reactions I’ve gotten from advanced readers and reviews, that I seem to have been able to get the point across. 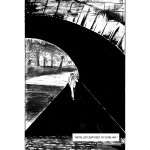 TRV: Paris is the setting for the book, but it seems like the French influence runs deeper than that. Specifically, some of your figures seem to vaguely resemble art from French cartoons or bandes dessinees. Am I way off in seeing that?

CH: I wouldn’t say that you’re off, because I do read a lot of older French comics. Something that I love about the BD stuff is that a lot of European artists will cartoon what I consider more real people. What I mean is that, if you look at a lot of mainstream American comics, you see a lot of pretty faces. Even the villains tend to be that way. I think that tends to make things a bit bland in my mind.
At one point during my residency with Paul Pope at ACA, Jimmy Palmiotti came by to visit, and when he was going through our work space, I was lucky enough for him to stop and critique and/or eviscerate me depending on how you look at it (hahaha). He didn’t hold back and I sat and listened so I would learn something. The biggest take away I got from that, was when he told me I hadn’t “cast” my characters correctly. What he was saying was that the character I had drawn was stale, because I’d drawn a rather arbitrary person. It wasn’t bad per se, but it wasn’t informative either. He told me and in turn the rest of us, that we needed to think like we were casting this book as a movie, therefore you don’t grab the first person off the street. You dig into what kind of character it is, are they good, are they bad, secure, insecure, etc, and that’s what determines the look. I think this is incredibly important and I try to be mindful of it all the time. If you look back at a lot of American cartoons, especially Chuck Jones’ work, you can see a bit of what he’s talking about I think. You need to make it feel like that character always existed, and the only way to do that is to try and visually articulate who they are.
TRV: Where do you see Paul Pope’s influence in your art? 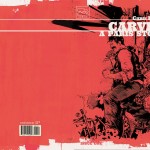 CH: Well it’s not as direct as you may think. I do use a brush, and that’s a result of my admiration for his work with ink since I was very young following his career. I also gained my confidence to begin to use the brush when I studied with him at ACA in 2010.

Overall though, I think Paul has influenced the kinds of stories I want to tell, and how I want to tell them more than anything else. He was never really mired in the conventional American comic model of storytelling, and before I even knew what a BD was, or that Manga meant Japanese comics, I was reading THB and beginning to absorb them piecemeal as I grew up on his books. It was only really later when we began to correspond that I learned about Hugo Pratt, and Moebius, or Osamu Tezuka and Katsuhiro Otomo. He got me hooked through his comics on these creators without me knowing it, then I was fortunate enough to get the syllabus for lack of a better way of putting it, later on from him. That is what truly shaped me into the kind of storyteller I wanted to become.
TRV: How much Carver do you have planned? 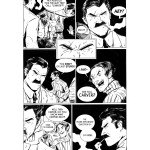 CH: Well, you’ve got to sell comics to be able to afford to publish them, or have other people publish them for you, so this first arc for Carver is set up so that in case I don’t get a chance to go back and tell more stories, it’ll have a satisfying conclusion while still implying a greater story and world. That being said, just from the point in time that this story takes place (1923) I know what Francis would be doing in 1941 as WW2 is ramping up, and that is partly do to his back story in the five years prior to this first arc. As seemingly disconnected as that may seem, there is a common thread to it all that actually has real world historical precedence to it. I don’t want to give too much away though, in case I do get a chance to tell the overarching saga of Francis Carver. That’s also a more than two decade span of time, so I’d love to tell some side stories that would be more like the conventional adventure comics or Indiana Jones kind of stuff. I’d love to be able to get the world to a point that I could hand parts of the universe off to other creators and writers that I admire to tell those stories, as I focus on the journey of redemption I’ve started Francis on with this first series.

Carver will be available online and in comic shops on December 2nd.