How the hell did I miss this? Cable is apparently an Avenger now! And the Avengers are going to fight Stryfe! Speaking as a child of the ’90s, YESYESYESYESYES. Jesus, this makes me want to throw a party and burn my copy of Marvel vs. Capcom 2 at the same time – I love him as a character in the comics, but if you use Cable in MvC2, you better be five, because anyone older than “barely not a toddler” is too damn old to use a character that cheap and garbagey.

This week in comics, I’m going to vaguely spoil Archie #4, so be forewarned that it’s the 2nd entry. No complaining! It’s Thanksgiving. First up: now that Amadeus Cho is no longer precociously, adorably brilliant, we meet Lunella Lafayette. 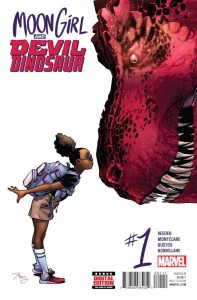 Okay, I guess I could talk more about why I’m into this, but it’s going to mostly amount to that. It’s really weird how Marvel’s most auteur books used to tend to lean all-ages (which is changing a bit now, but not a ton), but since Thor: The Mighty Avenger and right through The Unbeatable Squirrel Girl and now this, much of the most off-brand stuff Marvel publishes is aimed at everyone. I don’t think it’s a coincidence that it’s some of the best.

Natacha Bustos’s art looks like it would be equally comfortable in an Archie book: expressive faces, deceptively simple compositions with a great sense of pace. Amy Reeder and Brandon Montclare go right for the emotional throat (which…I guess that would be the heart SHUT UP), giving Moon Boy a heartbreaking death scene almost right away. Oh god, I’m going to keep getting feels from a sad T-Rex, aren’t I?

You can pick up Moon Girl & Devil Dinosaur #1 at your friendly local comic shop or online via Comixology. 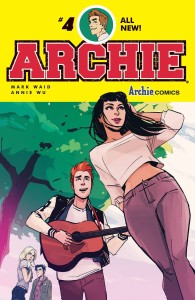 This is clever as hell. The fourth issue of the Archie reboot finally reveals the notorious “Lipstick Incident” that broke Archie and Betty up, and it’s an almost impossibly deft, meta take on the character.

Mark Waid is known for being a great comic writer, but his forte has always been a classic, throwback sensibility. He writes really good, timeless comic stories, but they’re usually just good comic stories and not reflections on the nature of the book he’s writing. Here, though, he breaks up Archie and Betty because Betty starts dressing and acting differently, trying out a different look, and Archie can’t deal with the change. So four issues into a ground-up retooling of a character and a world that has been largely static for three quarters of a century, Waid has suddenly made that book about the title character’s discomfort with change. That’s brilliant.

Annie Wu is a sensational artist who, like Fiona Staples before her, makes everybody look so cool and real that it’s easy to forget how many of these characters were wearing button downs and sweater vests six months ago. I really hope Archie keeps up this parade of greats, and I really hope the rest of the reboot is this incredible. PS don’t wear sweater vests, ok?

You can pick up Archie #4 at your friendly local comic shop or online via Comixology. 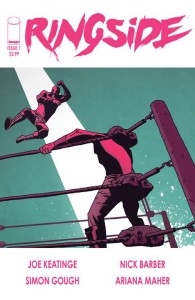 Joe Keatinge and Nick Barber take us behind the scenes of pro wrestling, to a world of ex-military commandos with safe rooms better armed than Micro’s van.

The first issue of Ringside follows Dan Knossos, a washed up wrestling legend working in Japan who returns to the states for…unspecified…reasons. They do seem to involve getting an asston of guns, so issue 2 should be a hoot. But we’re getting ahead of ourselves! Knossos meets up with a series of old acquaintances, some even rising to the level of “buddies,” before he finds his arsenal. The series is billed as having rotating perspectives looking at every aspect of the wrestling world, so I’m not sure how long we’ll stay with Dan for, but Keatinge writes him as the kind of gravelly, no bullshit guy I tend to enjoy. Barber’s pencils are loose (very loose in some places), but that’s effective: he tightens up the art to help direct the reader’s eye in the panels. Simon Gough’s colors are also fantastic.

I liked it a lot, but I really hope they work in more in-ring stuff. I know it’s called RingSIDE and not RingMIDDLE, but Barber’s art almost glowed when he was drawing the wrestling, elevating the entire book.

You can pick up Ringside #1 at your friendly local comic shop or online via Comixology. 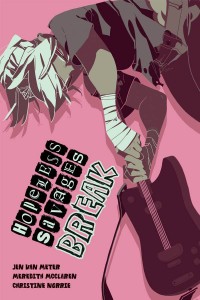 I have no idea why Hopeless Savages was in my head when it rolled past my eyes as I was planning this week’s column out, but for some reason I lit up when I saw it. I walked into this volume with absolutely no prior knowledge about the series, besides that I’ve liked stuff written by Jen Van Meter before, and I really liked Meredith McClaren’s art before. And guess what? I like something written by Van Meter, and I REALLY REALLY like something drawn by McClaren.

McClaren is absurdly gifted and perfectly matched to Van Meter here. She has so much energy in her framing and pacing, and pairing that with Zero (the main character)’s distinctive, manic speech patterns had me immediately smiling. Van Meter does a good job of recapping the entire world and sketching out the entire Hopeless-Savage family through Zero’s impressions of them. I honestly can’t believe how much I immediately enjoyed this comic – like, from page 1, I had my head cocked to the side and that smile on my face and I couldn’t put down this exceptionally well-made, well-conceived book.

You can pick up Hopeless Savages: Break at your friendly local comic shop or online via Comixology. 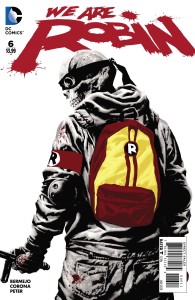 If you’re not reading this book, you’re missing out. It’s one of the most creative, inventive comics in all of Batdom. I’m going to do this as spoiler free as I can, because part of the joy with this book is getting emotionally invested in how the mystery will turn out.

Lee Bermejo is surprising the hell out of me. His writing is subtle and deliberate. He’s timing his revelations perfectly, and taking his time in showing us who each of the Robins is, while the artists he’s working with draw with the exact energy I hope for out of a Robin comic. This isn’t the last time I talk about We Are Robin this year, but the end of the first arc (sorta. It doesn’t seem like it’s broken into trade sized bites the way, say, Image books are) is a good place to jump on if you’ve been holding out, so go buy all the back issues you can get your hands on. Especially #4. Am I being cryptic enough?

You can pick up We Are Robin #6 at your friendly local comic shop or online via Comixology. 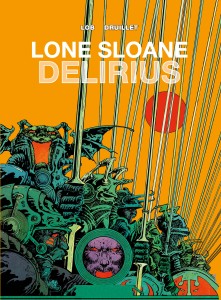 I really love these old European comic reprints. My comic tastes were, until really when I took this gig, pretty parochial and capey, with the seldom exception for something emo-weepy like Blankets or Scott Pilgrim (I cried when Scott learned the bassline to Final Fantasy). So it’s been a joy to dive into books like Lone Sloane that I missed otherwise, because they’re bananas.

Delirius is Jacque Lob and Phillipe Druillet taking a ’50s serial hero and putting him on Risa from Star Trek: The Next Generation, only more depraved. Honestly, I keep trying to read the words on the page, but I can’t get through more than one or two sentences before my eye is drawn off by Druillet’s incredible artwork. Look at it! Usually I have the opposite problem: I get so engrossed in the words that I lose that unfocusedness that I usually read comics with that lets me take in the words and the art at the same time. Not here. I have literally no idea what happened, but if I had to guess, I think it involved an entire Queen album punching Ralph McQuarrie in the drawing hand. I’m gonna keep trying on this. Forgive me if it ends up as just an hour of gawking at Druillet’s incredible skill.

You can pick up Lone Sloane: Delirius at your friendly local comic shop or online via Comixology.

ONE THAT GOT AWAY

Every week there are way too many comics for me to read and keep track of. So in every column, I’m going to take a look at a book that came out in the last few weeks, but that I only just had a chance to read. 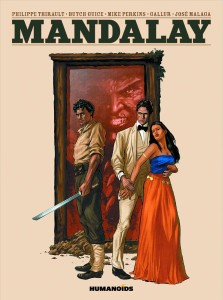 This week, it’s Mandalay from Phillipe Thirault and Butch Guice, and this might be the best art I’ve ever seen from Guice. I mean, I’ve mostly seen him work on stock superhero fare, so having him jump to monstrous horror was a jarring switch, but I really dug it.

Mandalay is the story of two British brothers in colonial Burma. One of them is about to die, and he’s saved by the nationalist keeper of a trio of haunted, evil mirrors, which have the power to infuse someone with terrible abilities. Alex becomes a monster, and his brother, Lance has to try and stop him as World War 2 breaks out around them. The story is interesting, especially the love triangle that never really goes away between the two brothers and Alex’s eventual wife, but Guice’s art is genuinely great and worth checking out.

You can pick up Mandalay at your friendly local comic shop or online via Comixology.

That’s what I’m reading this week. What are you picking up?