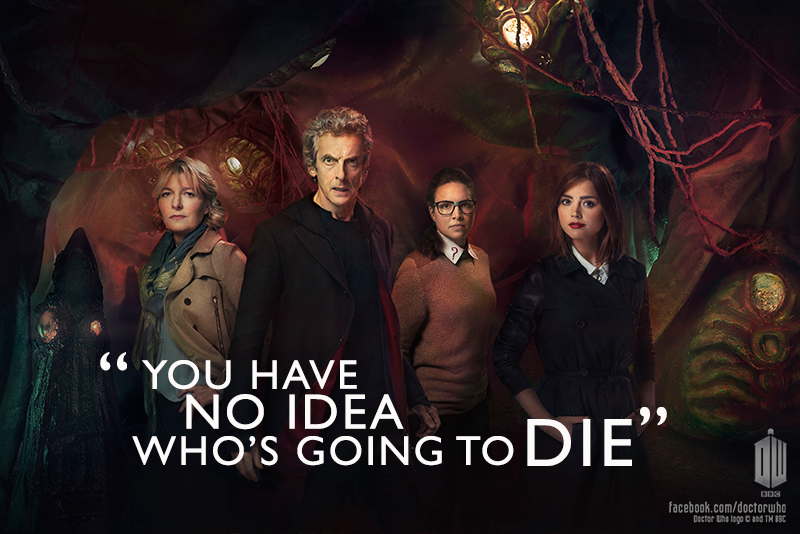 2001: A Space Odyssey is probably my favorite movie ever, and I love the final scenes as much as anybody. But seriously, given the number of times Clara Oswald has found herself in a simulacrum, you’d think she would figure it out more quickly by now.

On the other hand, a plot twist that still delights me – though it will probably bug the shit out of me someday – is the one where memory loss is being discussed, and one of the characters (usually the Doctor) says something like, “I know X is true, because this is the 15th time we’ve done this,” when you the viewer thought it was the first.

Though now that I’m thinking about it, BOTH twists were done better in “Asylum of the Daleks.”

Anyway. Since the Zygons are shape-shifters, it does make sense to use them if you’re going to try for a sleeper cell allegory, though the Muslim-fanatic angle breaks down a bit once it has you imagining that the Mid-East crisis could be solved simply by locking Netanyahu and Abbas in a room with Peter Capaldi yelling at them for ten minutes. (Worth a try, though. Think they’d go for it?) I like when the Doctor gets righteously angry for the cause of pacifism – if anyone can make anti-war folk not get stereotyped as wimps and cowards, it’s him. I’m not entirely sure the Osgood boxes are the best analogy for war, however. Good enough for brief storytelling purposes.

So the president-of-the-world plane has a Union Jack parachute on it, eh? Maybe he was hosting Austin Powers one time. Also, where’s the birth certificate, Mr. President? (Psychic paper doesn’t count.)

Jenna Coleman was pretty good as Fake Evil Clara, but I have trouble buying that the same character would want to turn into Osgood in the end, except as a sight gag. Unless it’s cover for breaking into the Black Archive again and really doing some damage. A-hole militant terrorists don’t just flip that quickly, though with the mind-meld of sorts I suppose it’s more possible.

Thank you, Osgood, the sonic shades ARE pointless. Except that Capaldi’s now going for the whole aging rocker look, and they help. Love their banter, and “Basil” is a good name for the Doctor, whether because of his many brushes with trouble or his fawlty logic.

So the countless actual alien invasions people have witnessed get shrugged off, because, as explained back in Eccleston’s episodes, they’re easily convinced something is fake. Yet a Zygon on YouTube – a site absolutely LOADED with prank videos in which somebody dresses up as a monster to scare people – is going to do the job? Love the gross transitions, with suckers erupting like boils.

Kate Stewart sure got back from “America” quickly. As for the whole Truth or Consequence bit, do we think Steven Moffat might be a fan of Mick Foley (who fake-hailed from there, and is also known for multiple personalities)?

And the Doctor once again references the events of “Day of the Doctor,” yet we are no closer to going back to Gallifrey. Remember when we all thought that would be the season-long arc? Twice?

The world is safe again, at least until one of the other thousands of Zygons goes rogue. Next week: It! The Terror From Beyond Space with added Time Lord.