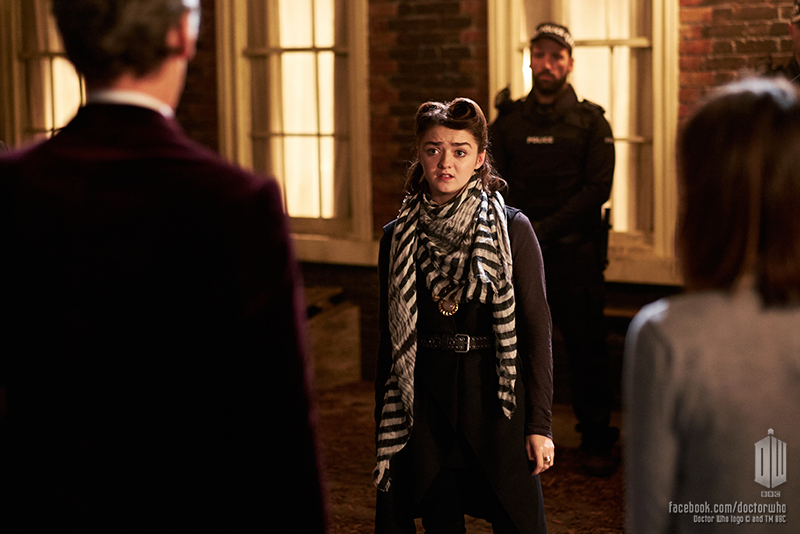 If you haven’t watched this episode yet, you’ll want to avoid any recaps or talkbacks, as major developments happened.

First up, last week’s episode really does look more bullshitty by comparison. Its cliffhanger is not developed upon, and the concluding note that most of what we saw was made up appears to have been utterly true. But since you, the viewer, have not been driven insane, what was the point?

Unless…the idea was to create an escape hatch for everything that happened this week. Like, you only thought it all happened because the dust got in your eye. They wouldn’t…would they? Oh shit, they totally would. But Moffat has said he meant for this week’s big plot point to be thoroughly undoable, so who knows. Yep. Who knows.

Now, to this week. Shocking deaths are more shocking if they take you by surprise, while this one was choreographed way in advance. I wouldn’t mind so much if not for the fact that the “mystery” which consumes the whole first half of the episode turns out to be entirely irrelevant by the end. It makes a kind of story sense, but it also invests the viewer in something that gets too quickly handwaved.

As for Rigsy, I forgot he even existed, and had to look up the fact that he was in the 2-D graffiti episode. Perhaps at least one unsubtle reference to that might have helped. Anyway, his numerical tattoo in a reverse countdown leads the way into the story, ultimately bringing the Doctor and Clara into a hidden street full of alien refugees, presided over by Ashildr (Maisie Williams, who I knew would be back for the big finale. Reap what you sow, and all that).

So, let me get this straight: Ashildr rigs up a fake murder mystery to get the Doctor involved, but involves a real death sentence on an innocent bystander, which is revokable if the Doctor falls into the trap properly. However, if – under the standard death sentence rules – somebody else takes Rigsy death sentence from him, it starts a new contract that Ashildr can do nothing about, despite the fact that she swore an oath that the particular person who then takes it will be safe in her protection. Makes…sense?

I think she’d lose in intergalactic court, but of course there isn’t time to have a trial before Clara dies. And given that the next episodes are called “Heaven Sent” and “Hell Bent,” I’m guessing the Doctor does go to the afterlife to try and reverse things. Clara’s death is sad, but honestly I thought she was better with Matt Smith than Peter Capaldi. “Asylum of the Daleks” is still a classic, and elder Doctor’s gaze on her could be a bit creepy at times; especially non-Danny times. Incidentally, I loved the way the Doctor fawned over Rigsy’s baby, even if we are overplaying the (admittedly canonical) notion that he speaks Baby. At least now we’re done with that damn teaser of Capaldi yelling “THE DOCTOR..AND CLARA…IN THE TARDIS…SAVING PEOPLE!” (or whatever – the first one of you smartasses in comments to be all, “Actually, what he says is…” earns dork points for life).

I have to assume the mysterious puppet-masters behind all this are the Time Lords, because who else?

Loved the Doctor in threatening mode. A little Malcolm Tucker shining through, there. Though I don’t want him always dark.

And isn’t it funny how worms are the go-to for every sci-fi magic effect? Memory worms, street-light worms, memory dampening worms…it’s literally like somebody pulled an idea out of their ass.

Keys seem a very old-fashioned thing to be fighting for. Aren’t we on to thumbprints yet?

Next week: a teaser that doesn’t reveal much, save a castle trying hopelessly to scare the Peter Capaldi Doctor. The only thing I can think of that would ever do that is a note from Moffat to Capaldi saying he has ruined the series so badly it will be canceled forever. And that sort of thing does not exist. Nor should it.