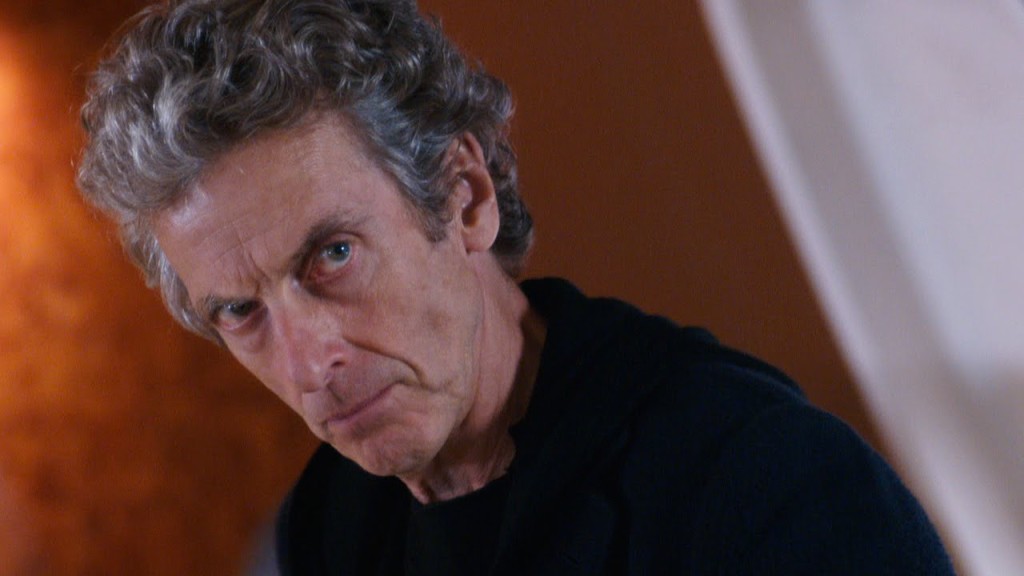 Morning everybody, and happy Substitute Editor day! Welcome to my first ever episode of Doctor Who. I apologize if the snark is a little heavier than normal, but I have no historical knowledge or context for this episode – I walked in blind because I’ve been meaning to give this show a try, and because I figured what better way to get tips on how to get into Doctor Who than to make a couple of mistakes in an online episode recap. Let’s see what happened with the Zygon Invasion:

The episode starts with two Osgoods talking about Operation Zygon, giving a helpful recap of what the hell is actually going on because I have no clue.

Then we cut back to a mourning Osgood, visiting her sister’s grave, which is marked “My Sister.”

The Osgood Box is not something lewd and hilarious, but some kind of doomsday weapon for taking out the 20 million Zygons who have shapeshifted their way to a peaceful resettlement on Earth.

Now we’ve got no scarf Osgood hiding under a desk in some desert town, texting The Doctor to come save her. Unfortunately, she didn’t turn her phone to silent, so the Zygon could hear her phone. He grabs her and zaps her brain, but not before she could get the text off to the Doctor who was wailing out some Amazing Grace on a quite pedestrian axe, to be honest. You’d think an immortal being would be able to get a cooler guitar.

The Doctor goes to some random playground, starts pestering a pair of twins and somehow doesn’t get arrested. The folks at UNIT are freaking out about Osgood’s capture, while the Doctor chases a couple of preteens around. We find out that there are rival factions within the Zygon population, and then the two 7 year old girls are taken by Squatt and Baboo, members of a rival faction of Zygons. Kate Stewart calls the Doctor for help, which I guess is a big deal based on how reluctant she seems to make the call.

We come back from break to Clara getting back to her apartment complex, where she finds a kid who can’t find his parents. She offers to help him find them, and she goes through his apartment (which apparently he hadn’t done?). His parents are there, and they grab him and carry him off screaming, but Clara walks it off and calls the Doctor to go check out the Zygon command center.

Zygon HQ on Earth is located in the basement of the elementary school the Doctor left his van in front of, and it looks kind of like Superman’s computer rig from the Fortress of Solitude (the one where you drop the crystals in to load programs) only if it was from a Gwar porno. The Doctor fingerblasts the computer, finds a bunch of Zygons around the world, and then gets another hostage video of the two little girls being forced to turn back to Zygon, then zapped to hair-covered piles of dust. We’re then treated to a discourse on how western foreign policy created a self-perpetuating radical movement in the Middle East, before the Doctor zips off in Air Force One to…somewhere…and Kate confirms to Clara that the Doctor has some kind of nerve gas that could turn all the Zygons to puddles of goo. Clara and Jac from UNIT head back to her apartment to save Sandeep, the kid who was nonchalantly carried off screaming before. They follow the weird alien family into the elevator, where the panel starts leaking pink goo, so of course, rather than play Higher and Higher on her phone, Clara caresses the goo and gets brought into some subway tunnel filled with alien rebels.

I know this is a common complaint, but Game of Thrones spends like, a couple million an episode. A comparable amount of time in Doctor Who looks like it costs $3.85. When Clara was being carried into the basement, I couldn’t tell if my cable box was glitching out or if the pixelation was supposed to be the effect showing their trip.

AAAAAAAAAANYWAY, UNIT is loading some missiles onto a drone at a base in what’s I guess New Mexico, but is super green for a desert. UNIT is going to bomb the town to destroy all the shapeshifters there, but then two of the Zygons shapeshift into the drone operator’s husband and son, so she flakes. Meanwhile, Stewart is walking through the town (making a lot of noise with those heels) when she comes up to the Sheriff’s office and its suspiciously British looking police car in front. She’s confronted by the local constabulary who demands to know if she brought back up.

Then the Doctor is being cajoled to give up the formula for the Zygon nerve gas while we hear about the secret Zygon training camp . And then we jump back to Clara and Jac who have apparently escaped the subway tunnels to uncover a great conspiracy involving elevators across the country. I think this was the plot to Neverwhere.

Now we’re back in the Sheriff’s office, where the probably American cop is explaining how the Zygons showed up with no jobs and no money and started lazing about, increasing the local crime rate and decreasing property values before they started forming gangs and wearing their own colors and stuff.

OH nevermind, the Doctor is at a Zygon-occupied village in a totally imaginary Somethingstan that’s definitely not Afghanistan. That’s why it’s all green there. Wait, why the hell isn’t he going after Osgood? I guess he’s going for the Zygon splinter leaders? So a bunch of Zygons come out disguised as family members of the UNIT strike force, and the idiots fall for it and follow them into a trap where they all get zapped. So then the Doctor finds Osgood trapped in a spider hole. He goes down to save her, and that’s when the bombing starts.

Stewart finds a few dumpsters full of zappy hair in New Mexico, while Clara finds a glowing pink hole under an elevator and again none of this is a euphemism. The Doctor and Osgood get back onto his plane, where he sits in a rolling office chair on a metal tube that goes 600 miles an hour and tries to find out if Osgood is the human or the Zygon version. She makes a point about the alien version being equally “real” as the non-Zygon Osgood, before she also points out that they don’t need to keep the human versions alive anymore, because they can refresh their form by digging through their subject’s memories. Not ominous at all.

On the plane, the Doctor questions their Zygon prisoner, while in the glowing hole, Jac and Clara lead a UNIT squad through the shooting of a Pink Floyd video. In trying to prove a point about destroying the Zygons, Clara finds a copy of herself and reveals that she’s a Zygon, it was a trap all along, and then all the UNIT people get massacred.

The Zygon “enemy combatant” on the Doctor’s plane gives their list of demands: they don’t want to hide anymore. He then announces that the Zygons have won the first battle, and now they’re going to start the war (which…hasn’t it already started? Isn’t the first battle necessarily part of the war? I’m sure someone :coughcoughGallencough: will be happy to correct me in the comments). Then we head back to New Mexico, where UNIT’s Captain Picard didn’t even bother to surround herself with redshirts, and she gets whacked and replaced by the Zygon cop. Zygon Clara checks in with her, then calls the Doctor to gloat and announce that Clara’s dead, then fires off a mini-Stinger at the Doctor’s plane and we get a “To Be Continued” screen.

So that’s that. Apparently everyone is dead and replaced with shapeshifting leftover Power Rangers villains, except the Doctor, who has to escape for there to be a show, and Osgood, who was already an…I’ve got something for this…unripe dragonfruit? White on the outside and pink on the inside? Oh god, I’m just making it worse. You guys think next week’s episode will be less jammed with euphemisms?