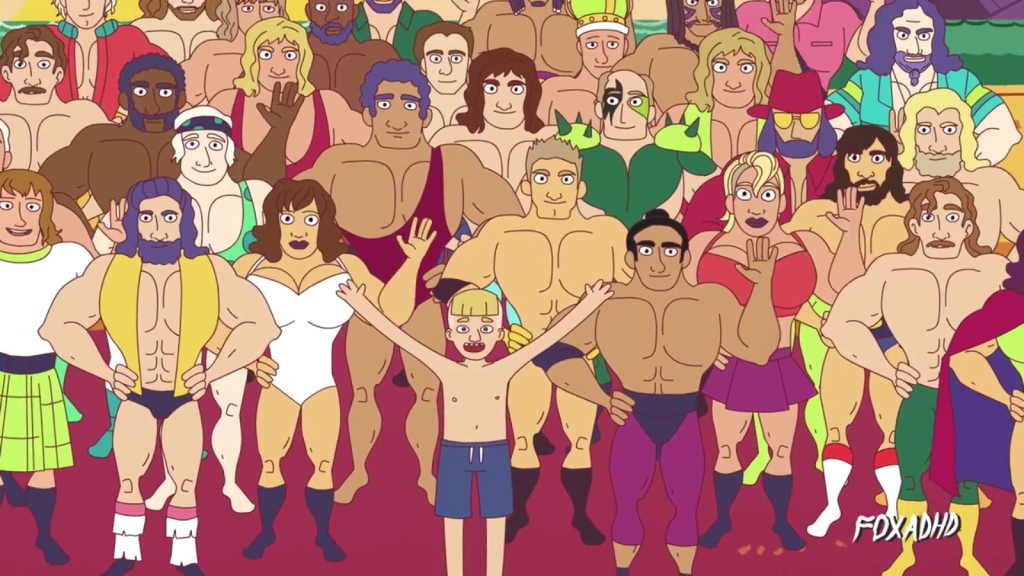 Let’s start with a little weirdness today. Fox ADHD, which often sneaks in wrestling references, did this strange tribute to dead legends yesterday. It’s almost tasteless and touching at the same time.

Back in WWE, we have a suddenly vacant title. Rollins and Orton are injured, and Cena’s taking time off, so we’ll actually get somebody new in that spot. But who?

Roman Reigns is the obvious choice, which is why it probably won’t be him. Second most obvious choice is Sheamus finally cashing in Money in the Bank, which I wish he would do soon, as it doesn’t add to his gimmick in any significant way.

A wonderful outside choice would be Big E, given how great the New Day’s work has been lately, but as they pointed out, none of them is even in the title tournament, which makes no sense in storyline logic when you see that Kalisto is in there, albeit as cannon-fodder for Ryback. The tournament itself so far is actually impressive, in that it is seriously the first ever WWE tournament I can remember that is repeatedly leading to good guy vs. good guy matches. In the past, you could predictably guess half the results of any tourney by the fact that each match would have to be good guy vs. bad guy. And that said, I’m surprised they’re doing Reigns vs. Cesaro already. Despite a lack of much of a TV personality, Cesaro is super-over with live crowds, and WWE seems to get it and is semi-pushing him accordingly. He might have been a sleeper pick, but there’s no way Reigns isn’t getting to the finals.

On the other side of that final bracket I would say we’ll either see Kevin Owens, Dean Ambrose or Dolph Ziggler. Ziggler’s least likely because they built him up last year just to tear him down. Ambrose is most likely because a Shield implosion is a good story. Owens is a dark horse just because he’s getting such a push as a scrappy badass they may not want him to lose cleanly just yet (and yes, I remember him losing before. But he’s on a roll now)

As for the other big storyline, I get that the return of Kane and Undertaker together got a huge pop, but I don’t think having them clear the ring of all four Wyatts was a good idea. Assuming the build-up is to a four-on-four match at Survivor Series, why show us that two people can easily handle four? They should have been outmatched, such that they need to get help. Then, at Survivor Series, have the two helpers they get, whoever they are, eliminated quickly to make it two on four. Heroes need jeopardy. Braun Strowman should have continued to no-sell everything, and stand up after the beating – now that fans “know” he can be taken down by the brothers, there is no reason to believe the Wyatts can possibly win, and that saps the potential match of all tension.

Finally, on a whimsical note, did anyone else notice how WWE just casually spoiled the major plot twist of Spectre in their brief congratulation to Batista?

Let’s hear your thoughts on Raw and the title picture below.