Menu
Home
>
Movies
>
Vin Diesel Was Serious About Furious 7 being Oscar-Worthy, and Universal Is Humoring Him 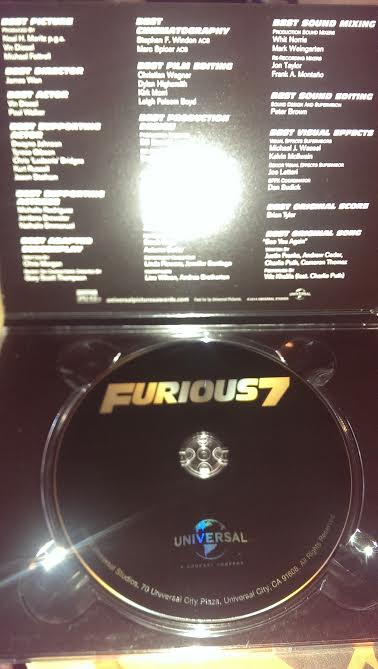 In an interview back in March with Variety, Furious 7 star Vin Diesel notably opined “It will probably win best picture at the Oscars, unless the Oscars don’t want to be relevant ever.” Film bloggers who have a soft spot for these movies immediately kicked off a brief debate in the movie blogosphere to the tune of, well, why shouldn’t an action movie be as celebrated as any other kind? The truth is, they are: Gladiator was nothing if not an action movie, and Saving Private Ryan came pretty close (both to winning and to being an action movie). [If you want to rule out period pieces and stick only to contemporary car chase movies, there’s always The French Connection.] Furious 7‘s issue is not that it is an action movie – it is that aside from the automatic heft Paul Walker’s death gives it for all involved, it is an entirely frivolous, mindless, ridiculously over-the-top action movie. There’s absolutely nothing wrong with that – but if you want to win an Oscar, it helps, for example, to look like the actors are trying to seriously portray characters, rather than jokey versions of themselves.

Now, let me explain what’s in that picture above. As a Member of the Los Angeles Film Critics’ Association, I get a lot of DVDs at year’s end, as studios seek my vote for our annual awards and want to make sure I’ve seen everything they’re pushing. Usually, the big seasonal blockbuster movies like Transformers or Man of Steel are not among them, with some exceptions (WB did send the last two Dark Knight and Harry Potter movies, though not the Hobbit films). Also usually, if the movie has been released already as a commercial DVD, they just send that – it’s an easy enough thing to do. Furious 7 is indeed out on DVD – which means that Universal specially and specifically printed a new awards version just for voters. In case you were wondering, it is normal for such things to promote every possible eligible person in every category – though Ronda Rousey is notably omitted from the Best Supporting Actress list here.

Does Universal actually think this will win any Oscars, or even critics’ awards? I highly doubt it. But with Paul Walker gone, and Dwayne Johnson a big enough star that he may not always be available, I think they want Diesel to be kept happy enough to sign for three more movies. If that means pretending he’s right that Furious 7 should win Best Picture, so be it.

It is presumably easier than arguing with him that nobody liked The Last Witch Hunter.