6. The Marvel Director-Movie Combo That Nearly Was. 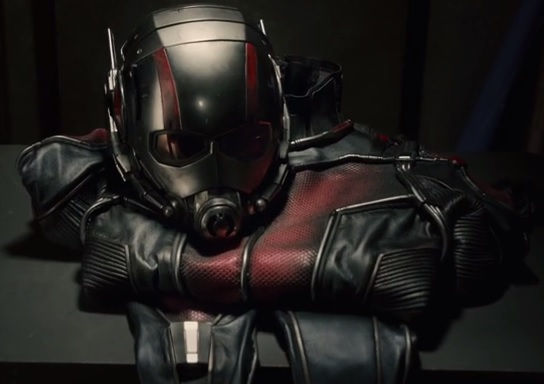 LYT: When Edgar left the project, were you called immediately? Did you have to pitch something?

PR: I didn’t time it. I don’t know how – no, all that really preceded my involvement. I got a call from Marvel to come meet, and I’d worked with Kevin before, years ago, and had actually pitched on Guardians of the Galaxy before, as well, so I came in and talked about it and really liked the idea of doing this movie, and it made sense for me., so I said yes.

LYT: I saw in your bio that you’ve done some other superhero movies: Fantastic 4, and Catwoman, that were less faithful to the source material visually than this. Does that feel like a constraint? Is it liberating? Or does it make a difference to have it have to stick closer to the comics?

Shepherd Frankel: Um – that’s a good question. I feel like Ant-Man is a real special property, and a real special source material, as you put it, that was created in a very specific – like, the birth of Ant-Man happened at a very specific time, and technology was so different then than it is now, so there’s a kind of retro-sensibility to the birth of the character. It wasn’t about putting him into a futuristic world. It was about putting him into a very kind of visually valid, contemporary world.

So I think in terms of the source material and being true to it, I feel like that was really about honoring Hank Pym as a character, when the Ant-Man suit was created, what happened with the Ant-Man suit, him retiring it and putting it under wraps and kind of moving on with his life. And that moving on with his life was a whole other part of his – of the visual journey, which was he created Pym Technologies as a place where he could develop things that didn’t include the Ant-Man suit, and was looking out for the better progress of the world. His protégé Darren Cross then takes over, kicks him out, and starts reintegrating some of the technology as weapons.

So I thought – I felt like it was – this movie has the advantage – the film Ant-Man has the advantage of these characters having very distinct kind of times in which things happen for them, versus where they are now. So I feel like there was a lot of great material to reference to show the growth of the Ant-Man character, and why he’s being reintegrated into the world today.

LYT: To that point of our understanding of science having evolved quite a bit – how much do you let real-world physics and things like that sort of effect the designs, where you have to, to a point, hand-wave away some of that for the story?

SF: Well, I feel like in this movie, all of the environments really needed to have – really feel relatable and understandable. Because that would make something that was everyday, like, “Oh, I’ve been in a buddy’s house that was like this,” or “I’ve walked down the street and it felt like that,” or “I’ve been to that police station,” and “My grandmother has a house like that.” Or a laboratory – “That looks like a high-tech lab from Intel,” or a clean room, or something like that.

So I felt like these environments really needed to support – we never wanted to take the audience out of the movie by being overly aware of the environments, so we wanted it to feel like an appropriate representation of the character, and how the story was being told, because when we zoomed into those macro worlds, that’s where we wanted people’s brains to be bent. Like, “Holy cow, that’s what it feels like to be down there!” That’s the – those are the alternate universes. Those are the interplanetary kind of travel, is when they are in these microenvironments, so we wanted to kind of keep everything else as a pretty relatable, contemporary representation of the world that the film takes place in.

LYT: Then when you get into something like the microverse, how much actual science research do you do versus, say, what will work better for the movie?

SF: That’s a great question, and like, yeah – what happens if you are shrunk down to a half of an inch? Does time slow down? Do things speed up? How does sound travel? Can you hear things the way you and I are hearing them now? What is the wind like then? And all that stuff was discussed and challenged, and any time there was a verdict that was created, we would poke holes in it and challenge it and discuss that.

I think that Peyton did a great job of describing his vision of in the microverse, wanting to end in a void of silence. All these visual kinds of moments to boom! – ending in a void of silence, and how much that spoke to the isolation and “I don’t know if I can ever get back to where I was” part of that journey.

LYT: Was there anything you designed that couldn’t be done? Or is that even an issue when dealing with Marvel movies these days?
SF: Is there anything we designed that couldn’t be done? I mean, there’s a lot of – when you’re laying out a film like this and designing the world that it takes place in, there’s a lot of conversation about what’s being built for us to – for humans to interact with, and what’s the digital extension, and all that stuff was pretty – I mean, like any film, there’s always challenges, but from a creative standpoint, I’d say no. We were limitless in our ability – we were resourceful and tried to figure out ways to execute ideas, and that’s a total cooperation between all departments – director, DP, visual effects supervisor, producer – and how we shoot scenes in different environments, and what’s important to that scene.

So sometimes the big, huge skyline is a critical piece, but we basically took our Pym Technologies, which we shot the exterior of in Atlanta, and put it on Treasure Island. That’s like moving a whole building and the affiliated environment, but no one’s thinking about that when you look at the movie, because we kind of stitched it together properly and did shots that supported that, and pushed it to the brink of how to build this world.

The tank coming through the building, because there’s so many dynamic, physical events coming around all of these particles, and the scale of it, that was like, a great visual effects supervisor is really interested in having real assets performed the way they do for him or her to expand upon. So for instance, even in some other films where it looks like black ink is going through the air and sucking into people’s characters, that’s ink being squirted into water and being photographed, and expanding upon that.

So in this particular film, what would we say is – well, going through the model. Going through the architectural model was all done in camera. Oh – some of the caves – the ant trails – we built those and the camera went through those, and then they were enhanced digitally. I think a testament to our visual effects supervisors – we set up a lot of principles around what can and can’t be done well, just digitally. Our job throughout the production is to make sure assets are being shot, or parts of things are being built so there’s something for them to work with. So nothing is being built from scratch.