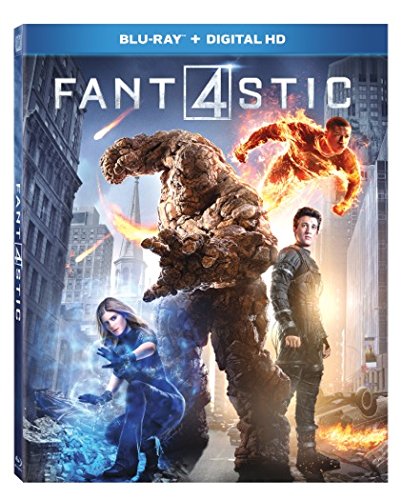 Fant4stic – Remember when some people thought Michael B. Jordan’s casting as Johnny Storm would be this movie’s biggest problem? Yeah, that was cute. Jordan turned out to be one of the few things right with the film, which made Reed creepy, Sue autistic and Ben a traumatized murderer. But unlike the Roger Corman version, or even the previous Fox iterations, the new Fantastic Four commits the cardinal sin of being dull and un-fun while it trashes the mythology, so it’s hard to even laugh at. Scant extras include concept art, and featurettes entitled Superpowers of the Fantastic Four, The Quantum Gates and Planet Zero. Sadly, there isn’t one called “Josh Trank: Fuck-up Supreme.” That might require a whole other movie, like the Troy Duffy documentary Overnight.

Mission: Impossible – Rogue Nation – Overrated as the best in the Tom Cruise franchise about how Tom Cruise is more awesome than an entire team of specialists (Ghost Protocol is the real best one), it’s a decent actioner but poorly paced, blowing the big setpiece load early in favor of stalking and fighting in darkness to an awkward climax. Even more awkward is how Tom Cruise’s black hair is now somehow less convincing than Ronald Reagan’s ever was as president, and how his nose and ears are growing into seniorhood even as he tries to force his face to retain its youth in every other way. It’s distracting, and suggests that the time for Xenu’s favorite poster boy to start taking on more character parts is nigh. The whole diving into the underwater vault bit is aces, though. And for about twice the price, you can get all five M:I‘s on one disc, though there are really only two good ones (/snark)

Ted 2 – Seth MacFarlane’s most Family Guy-like movie yet wants to be some kind of analogy for gay marriage rights, but it’s mostly just a bunch of off-topic weed and comic-con jokes, with a healthy helping of his trademark “ironic” racism and homophobia. And even if the slurs are all “just a joke,” it kinda displays a hostility towards working-class Bostonians as bigots, so he doesn’t win either way. That said, as much of a mess as the movie is, it is undeniably funny, albeit in a more sporadic, disjointed way than the original, which had a real point to make about grown men not letting go of childhood obsessions. The disc includes an extra ten minutes that make it “unrated,” plus featurettes, gag reel and a commentary track with MacFarlane, executive producers/co-writers Alec Sulkim & Wellesley Wild, and actress Jessica Barth.

Maze Runner: The Scorch Trials – I just watched the first Maze Runner on HBO. Decent effects and creatures serving an awfully abbreviated story with an obvious (yet preposterous) twist – can’t a society capable of building such an elaborate survival test in a post-apocalypse world make better use of its meager resources? I’m not especially anxious to see another one, but I won’t be mad if you are. At least there isn’t a villain as stupid and unthreateningly named as Divergent‘s “Janine.”

Count Dracula – Stop! Not-Hammer Time! This 1970 adaptation by Jess Franco features Christopher Lee with a book-faithful mustache, playing Bram Stoker’s vampire very differently than he did in the UK horror films that made him famous. At the time it was billed as the first truly faithful version to Stoker’s text. Then again, so was Coppola’s in the ’90s. Both exaggerated slightly.

Triumph of the Will – The world’s most famous Nazi propaganda film, and also a touchstone in every argument of art versus morality. Undeniably great filmmaking, but given its aims to persuade German audiences to fascism, is it an abuse of free speech? Now that the director is long since dead, you can find out without making her a dime.

What Have You Done to Solange? – No, not a Beyonce biopic, but a “classic” slasher featuring the film debut of I Spit on Your Grave‘s Camille Keaton.

Blood Rage – Remember Eli Roth’s fake trailer for a holiday-themed horror flick called Thanksgiving that was released as part of the movie Grindhouse? This is, basically, the real thing.

The Car – 1977 Satan-sploitation movie in which small-town cop James Brolin fights a demon-possessed automobile. As you do. I presume he lures it to Los Angeles where it gets stuck in gridlock forever.

Those are my top picks. What are yours?