Yeah, I know I’m late on this one. They actually came out last Friday, but then I had to stream for 24 hours, so you get this just shy of a week late.

If you’re unfamiliar with the glory that is the Humble Monthly Bundle, allow me to explain. Actually….the service’s name is fairly self-explanatory. It’s a bundle of games, it arrives monthly, and apparently it’s not particularly braggadocious. For $12/month, you get 8-10 games every month (usually 2-3 of which you’ll receive right after you pay, while the rest remain a mystery until the first Friday of each month) and 10% off all games in the humble store. Not a bad deal, right? I guess that all depends on if the games are any good, so let’s take a look at what this month has to offer.

$29.99 on Steam as of this writing
Originally released in 2012 for the 3DS, this Resident Evil title takes place between Resident Evil 4 and 5. I’ve personally never played this one, so I’m pretty excited to check it out. I loved Resident Evil 4. Recent reviews on Steam are at Mostly Positive, while overall it stands at Very Positive.

If that’s not a positive review, I don’t know what is.

$19.99 on Steam as of this writing
Had enough of Zombies? Too bad. Here’s another zombie game for you. I remember when this one came out. The trailer was so cinematic and set such a great tone. Then the game came out and it was nothing like that trailer tonally. I’m not sure how many opinions were colored by that stark difference, but I don’t remember hearing many good things about this game. Still, it sits at Mixed recent reviews and Mostly Positive general reviews on Steam.

And he never talked to a woman again.

$7.99 on Steam as of this writing
Now we go back in time both in the real world and in game. 2005 in real time, World War II in game time. Ah, WWII. The most popular game setting. I’ve heard of this game before, but never played it. I grew out of these war games after Call of Duty 3, so I don’t think I’ll give many shits for this one. That said, it’s Mostly Positive across the board on Steam, so what do I know?

Can’t argue with that logic

$19.99 on Steam as of this writing
Hey, it’s another one of these. Let’s just pretend I copied all the stuff from the previous entry and pasted it here. I’m sure that’s what this game feels like. But don’t take my word for it! It has…..Very Positive reviews both recent and overall on Steam…. Man, I just don’t know about games anymore.

Just take it from [VB] TigeR

$59.11 for the GOTY pack on Steam at the time of this writing

I couldn’t find just the first season being sold anywhere, so we’re using the GOTY pack on Steam. There may be some additional content that you don’t get in the first season bundle that’s packaged in this month’s monthly bundle. This is the grand reboot of the Hitman series that dropped in 2016. If you’re a fan of Hitman, this seems to be a great revisit to that gameplay. I’ve only seen let’s plays of this one, but it looks great. Especially the escalation mode where you’re dropped in a location with increasingly difficult guidelines to follow for a successful mission. Mostly Positive reviews across the board on Steam. I’m looking forward to diving into this one. 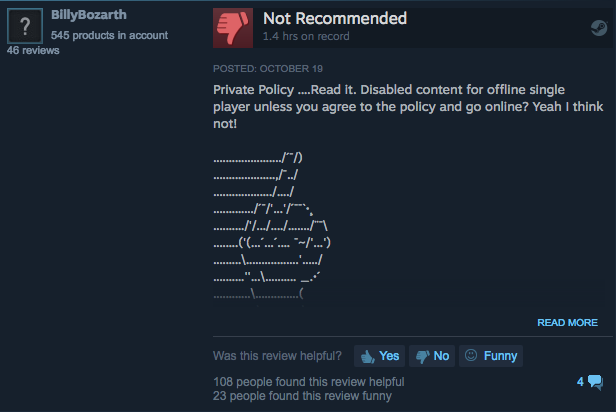 Well, apparently we found out why it’s only mostly positive

$14.99 on Steam as of this writing
Now this is a fantastic game. If you’re a fan of Metroidvanias, this will be right up your alley. The art is beautiful and appears to be hand-drawn, the difficulty is fairly high, and it is absolutely a joy to explore this depressing-looking world. Very positive reviews across the board on Steam. 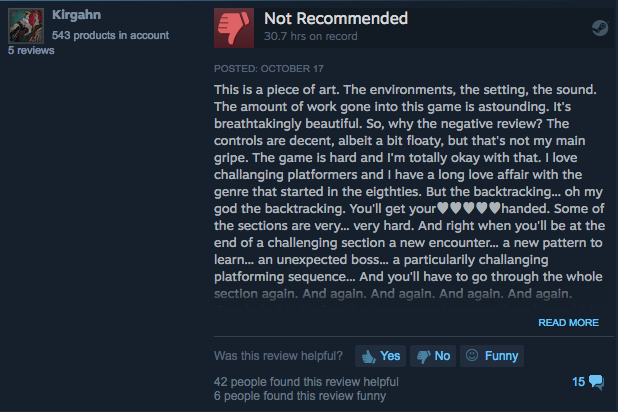 Someone isn’t a fan of Metroidvanias

$24.99 on Steam as of this writing
Remember when survival games were all the rage? Man, it feels like it was five years ago. What? This game hit early access five years ago? Wait, it’s still in early access? What the hell have the folks down at The Fun Pimps (not to be confused with plain old boring pimps) been doing all this time? 7 Days to Die is like if Minecraft had zombies–wait, Minecraft does have zombies… 7 Days to Die is like if you could build things in Rust–Wait.. you can build things in Rust. 7 Days to Die is a buildy-crafty-survivey game. If that’s your steez and you haven’t played it yet, here you go!

$39.99 on Steam as of this writing
I’ve never heard of this one. Looks like it came out in December of 2016 with mostly positive reviews on Steam. At first glance, it appears to be similar to Neverwinter Nights or Baldur’s Gate. Apparently it’s based on a book series. Looks like it could be a fun time, but it also looks like many other games in this genre. 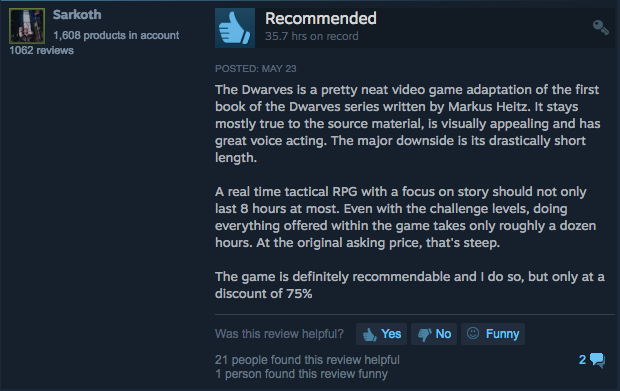 Hard Reset Redux is a shooter, and apparently Jim Sterling gave it fairly high marks, and he doesn’t like anything. Looks to be set in a cyberpunk universe, which is always a pretty fun setting. Larger-than-life enemies and ridiculous weapons look like they’re the main course on this title. It makes me think of my Quake 3 days, and for that reason alone I’m actually fairly stoked to check it out. Mostly Positive recent reviews, Very Positive overall. Potential for entertainment seems high. 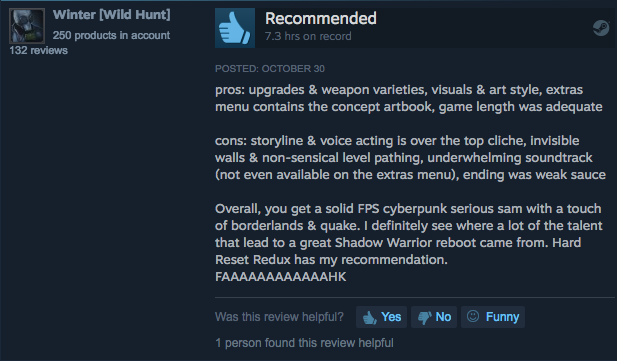 None of those cons seem too bad, but I’m worried about what happened to this reviewer at the end… 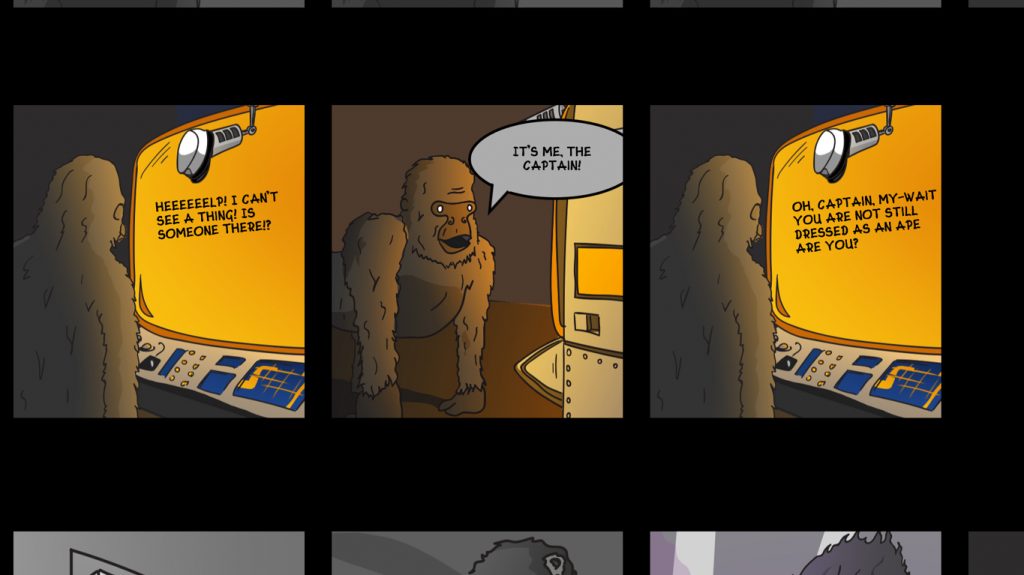 Every month, Humble includes a Humble original. A game that is made specifically for Humble Bundle Monthly subscribers. Usually these are experimental games. This month we have an interesting looking point-and-click adventure. Definitely another that I’m excited to check out!

And that’s all the games in November’s bundle! Worth the $12? I’d say so. If you’re not already a subscriber, it’s too late to grab these games, but there’s still time to grab the early unlocks for December’s bundle. Right now you can grab Metal Gear Solid V: The Definitive Experience and Cities Skylines, and be ready for a handful of other games to unlock on the first Friday of December! Just head over to Humble Bundle and subscribe! 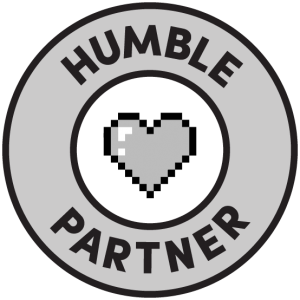 Disclaimer: Topless Robot is a proud Humble Bundle partner and receives compensation for each signup. This fact has not influenced this article at all.