The Emperor’s IT Division

In Warhammer 40,000: Mechanicus, players take control of the Adeptus Mechanicus – an elite squad of fanatical IT professionals that skips through the galaxy, destroying all xenoforms they encounter on their merry path. 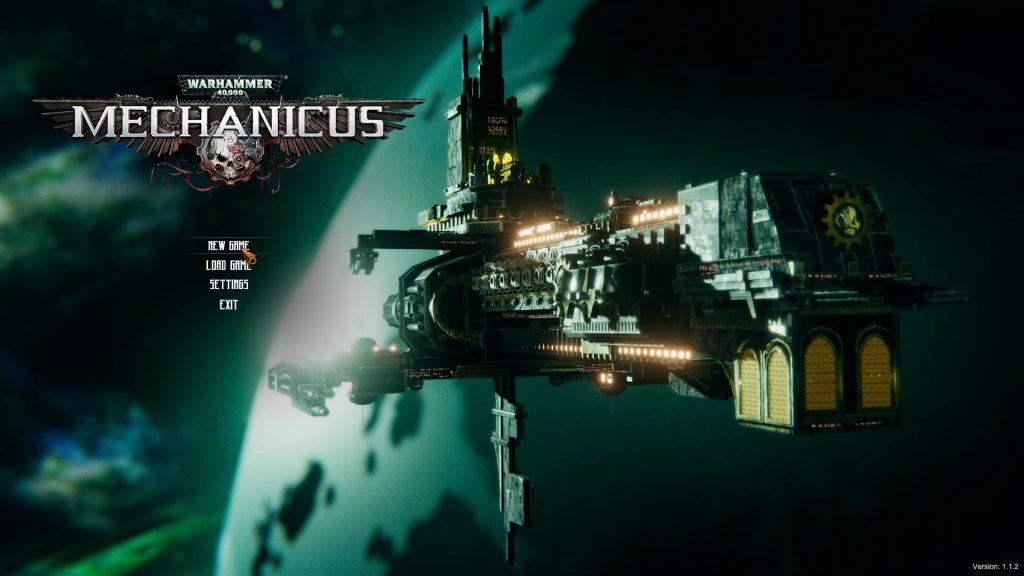 At the game’s start, we see the Adeptus Mechanicus land smack dab in the orbit of the mother-of-all server farms – a planet called Silva Tenebris. Assuming the role of head of IT, Dominus Faustinius, players quickly find out that this behemoth of a botnet entombs a horde of bugs, malware, and the toughest bots this side of Bonzi Buddy – the Necrons. 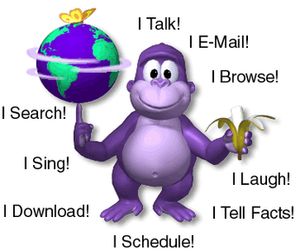 A data breach of this size and intensity could catastrophically affect the entire galaxy. So, there’s only one thing to do: send out a team of your best religious tech-weirdos (uh, tech-priests) in an effort to hard-reset the planet. 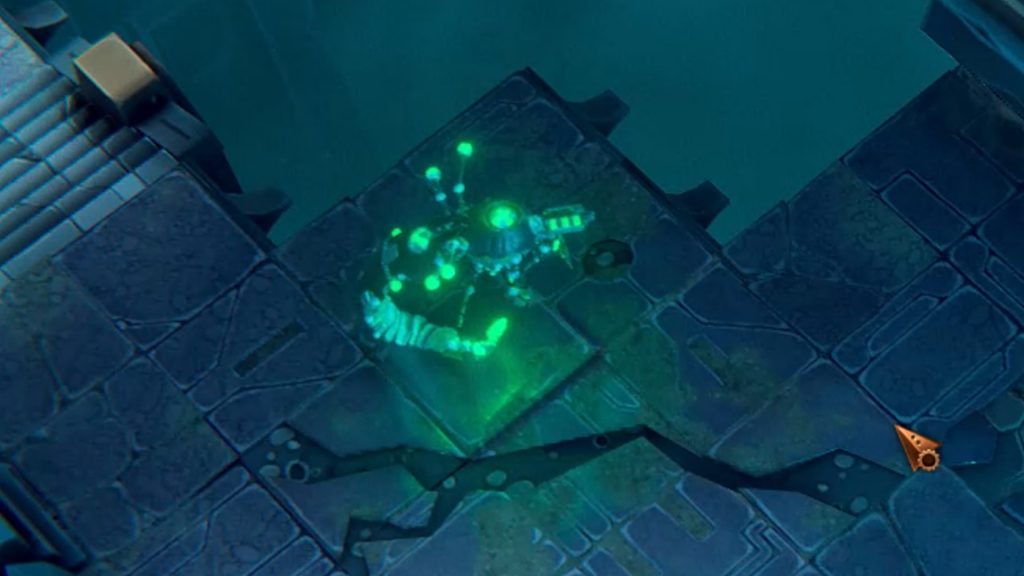 Just look at the SIZE of that one!

In all seriousness, Warhammer 40,000: Mechanicus is a squad-based tactics game set within the deep lore of Games Workshop’s popular board game license. The Adeptus Mechanicus are normally portrayed as the engineers of the Imperium – tasked with researching, building and maintaining the scary kill-devices used by humanity’s armies. It’s fascinating to see them take center stage in a game, and this is a Everything about how Mechanicus looks and sounds oozes that particular grim-dark brand of Warhammer 40K atmosphere. While it shares some surface similarities with contemporary turn-based titles such as X-Com, dipping a toe into the strange and satirical world of Mechanicus has a feeling all its own. 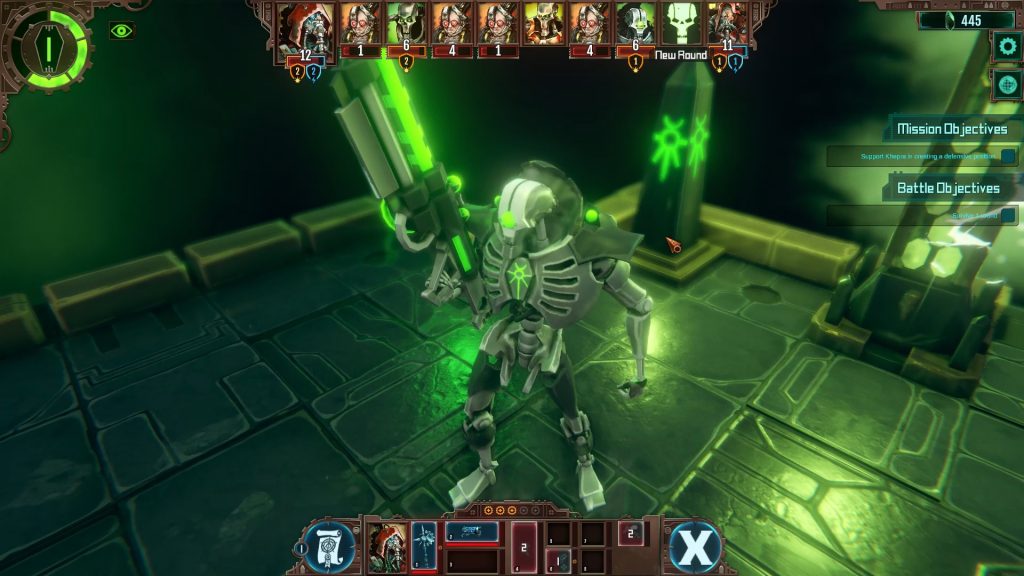 Released on November 15, 2018, Warhammer 40,000: Mechanicus was created by French developer Bulwark Studios (known for the 2014 indie strategy/RPG Crowntakers) and published by Kasedo Games. Mechanicus was developed as sort of a last ditch effort to keep the studio afloat – an interesting story all its own that is outlined in a superb Rock Paper Shotgun interview.

Atmospheric On A Budget

Warhammer 40,000 Mechanicus visually impressed me, not because of the realism or detail of the graphics, but with the clever tricks used to highlight its strengths and downplay its weaknesses. Make no mistake: this is a budget title (sold for $29.99 full price on Steam), but you can feel the passion

Crisp motion graphics, suitably detailed models, stylish effects, and a large injection of character goes far to bring Silva Tenebris to life. Tech-priests are the stars of the show, being highly customizable and upgradeable to the point where they bristle with weapons and relics.

The environments use a limited tileset, and can come across as a bit dark and barren, but this suits the theme of a killer robot tech-tomb quite well. My one complaint is the lack of a free camera – you can only rotate the perspective in 90 degree increments. I’d love to be able to watch Servitors bash a Necron trooper from a more up-close-and-personal view. 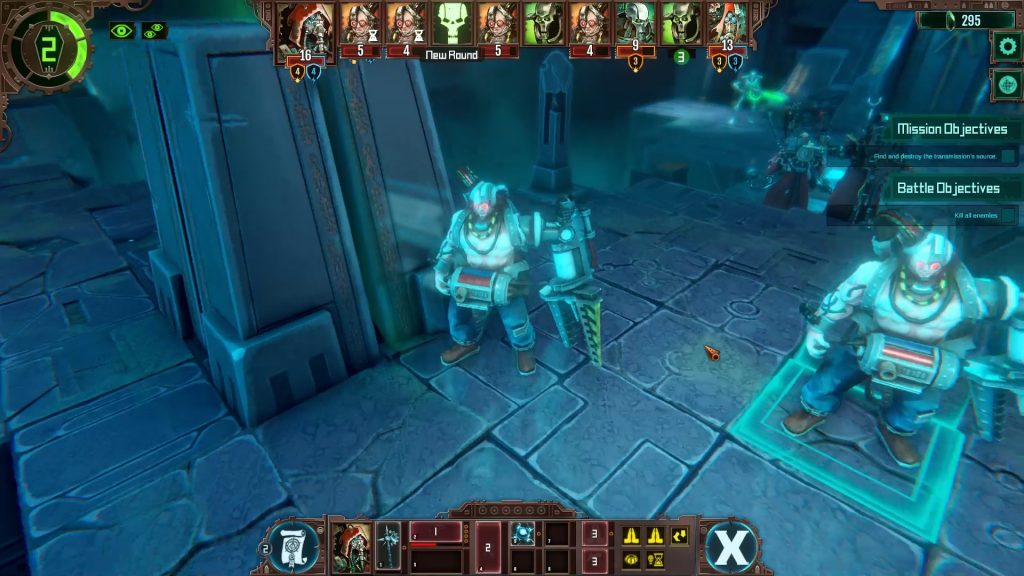 The Voice of the Omnissiah

Sound design in Mechanicus is simply stellar. I can’t get enough of the soundtrack’s utterly awesome ear candy. (In example) Much attention was placed on the electric blasts of plasma rifles, the thudding footsteps of your steel-shod soldiers, and even the meaty user interface sounds. 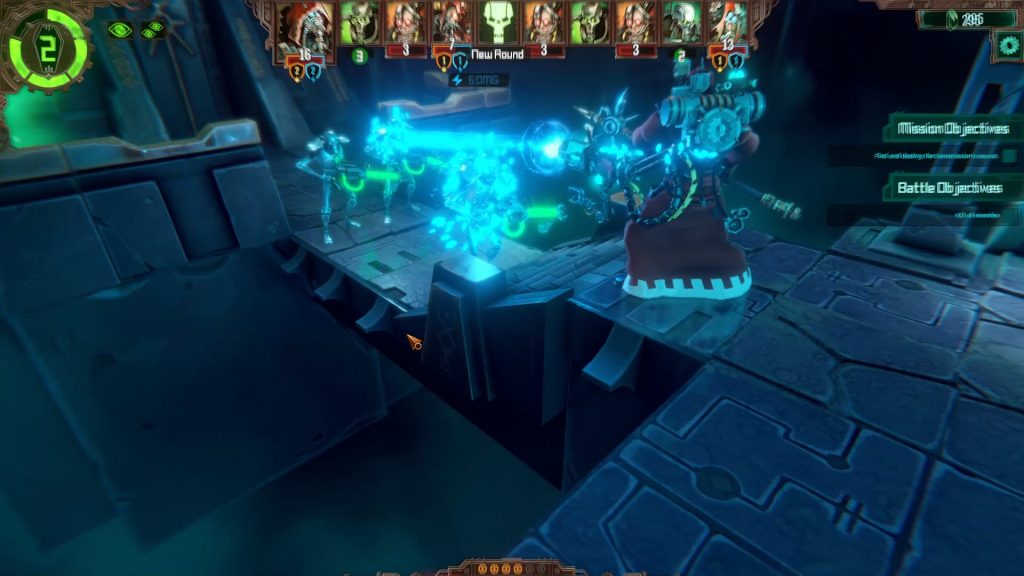 Just listen to those skeletons fry!

The low-end growls of the machine-man voices are bone chilling. (And I mean both the bass filled rattles of the Adeptus Mechanicus as well as the resonant rasps of the Necrons.) While actual voice acting is scarce, several of the important villains have voiced lines. Most of your subordinates tend to talk in their own brand of gibberish, which feels fairly fitting for these for these Latin-spewing tech-heads. This has the overall effect of making the Adeptus Mechanicus feel nearly as alien as the Necron xenoforms they battle. What’s more, each of these advisors has their own personalities and proclivities. Pursuing their ends provides your cyber-popes with different equipment, unit, and weaponry rewards – and opens different branches of the story.

Mechanicus has much of the trappings of a board game translation. Your IT crowd’s tomb raids have the analogs of cards to play and coins to flip at every turn. X-Com this ain’t. Unit positioning and the smart deployment of expendable units will win the day here, as will the frugal use of the many unlockable skills and abilities at the disposal of your robopreachers. 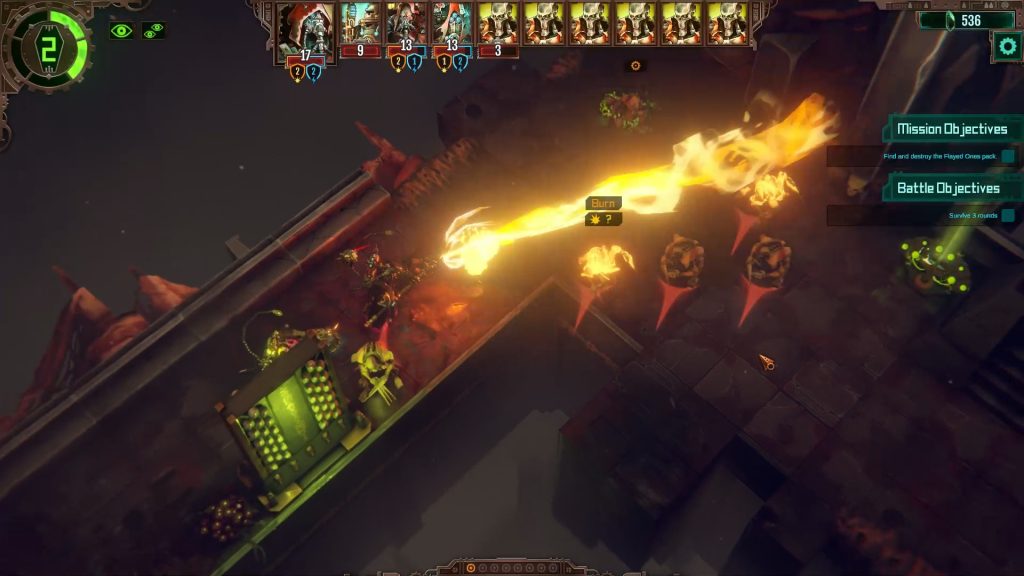 Let’s just burn ’em with a little bit of the ol’ Blessed Flame – it’s the will of the Omnissiah, after all.

Combat comprises the majority of the game. This takes place on familiar square-grid style maps, but X-Com this ain’t. RNG is light and limited primarily to weapon damage, and cover systems are nonexistent. True to the brutal roots of the source material it draws on, Mechanicus instead encourages you to actively use your lesser troops as meat-shields and decoys while your mecha-preachers deal the bulk of the damage. These tactical battles rely on a decent amount of resource management, in the form of “cognition”. Most of your wardorks’ abilities rely on this resource, which is meant to reflect their co-reliance on processing power, and must be harvested from the field (or from special abilities or items).

Tactical encounters in Mechanicus are strung together as mission sorties, which allow you to shuffle around your cohort from orbit. Rooms can provide additional battles, choose-your-own-adventure style encounters, charming conversations with your Magos generals, hidden treasures, or deadly traps. The choose-your-own-adventure encounters are of particular note, providing story notes as well as insights into the mindset and culture of the Necrons.

These sorties come together to form your campaign, and the backbone of the story’s revelations. Since each completed mission adds a chunk to the “robo-skellington wakey meter”, a single run won’t unlock everything. (There’s even an entirely secret story branch, which can be found only by a bit of trickery on the mission select screen.) This adds a good degree of replayability to Mechanicus, and I actually found myself reverting to previous saves in order to learn more about the fate of Silva Tenebris.

“Does this robot tentacle come with a service warranty?” Tricking out your mechanical monks is a huge part of the fun, and each upgrade shows up on the character models. So friggin’ cool.

Mechanicus isn’t perfect. The odd rough edges sometimes poke through. An upgrade bug ate some of my precious Blackstone without providing the sweet, sweet technology. There’s the occasional typos in some of the dialog or encounter text. The late game strays to the easy side, and could benefit from further balancing, difficulty selection, or New Game Plus modes. Fortunately, the developers have already hinted towards some of these additions. Overall, these minor gripes seem trivial compared to the amount of value Mechanicus provides.

Warhammer 40,000 Mechanicus is the best strategy game you aren’t playing. The shorter pick-up style nature of the missions means that gamers on a time crunch can still feel like they accomplished something. Mechanicus is probably one of the best adaptations of the Warhammer 40K license that I’ve ever personally played. Hell, it’s one of the best adaptations of a licensed game I’ve played period. 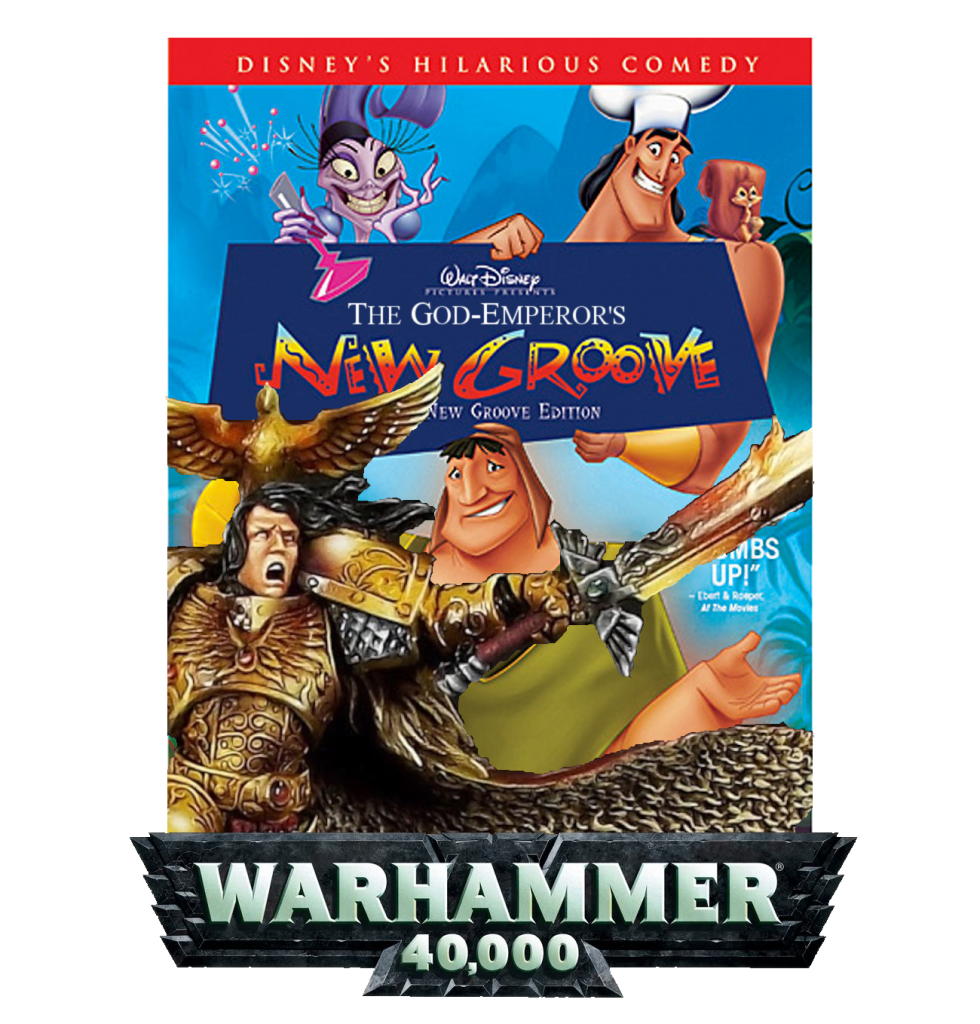 How the God-Emperor Got His Groove Back: a Disney classic.