Today’s Backlog Quest aims at the newest incarnation of Atom RPG, a love letter to the role playing games of old and a gushing homage to Interplay’s first two entries in the Fallout series. Despite the generic title and premise, this is no asset flip or cheeki-breeki knockoff.  Atom RPG does much to improve on the Fallout formula, and adds flavor all its own. Prefer to watch? Click the link above or visit 2 Headed Hero on YouTube!

Atom RPG: Falling Out All Over Again

1997’s Fallout was a strange phenomenon within the game-sphere of the time. Scores of interviews over the years reveal it as a rare example of a truly original passion project – the brainchild of letting a creative group of developers run wild. 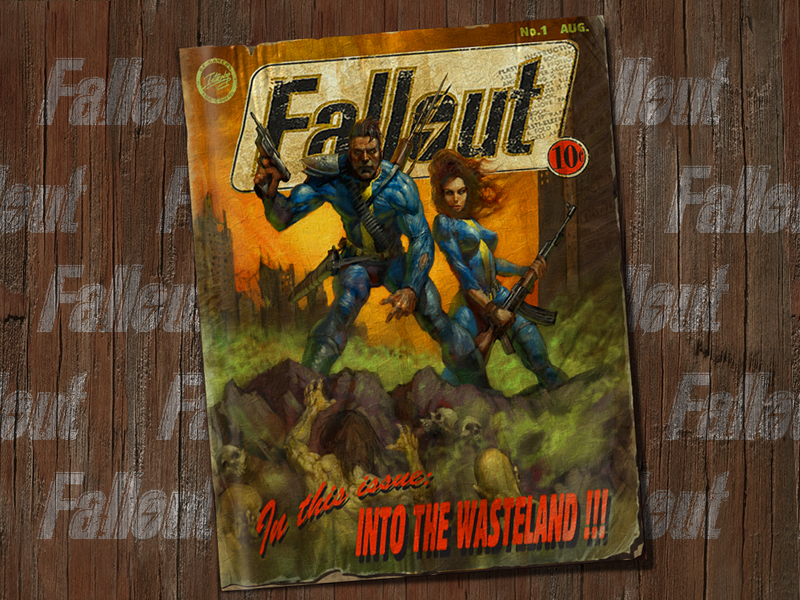 Fallout’s lively combination of post-apocalyptic grittiness and atomic age retro-futurism was further highlighted by a nearly unparalleled amount of open world freedom. Many problems had multiple solutions. Many obstacles could be defeated without firing a single shot. With a huge amount of player agency and plenty of toys in its sandbox, Fallout put the “role playing” back in roleplaying game.

Over the years, the Fallout property has been taken to unforeseeable heights – and disgraceful lows. There’s no denying that the long-running series has cast a long shadow over video games. This brings us to the subject of today’s review. 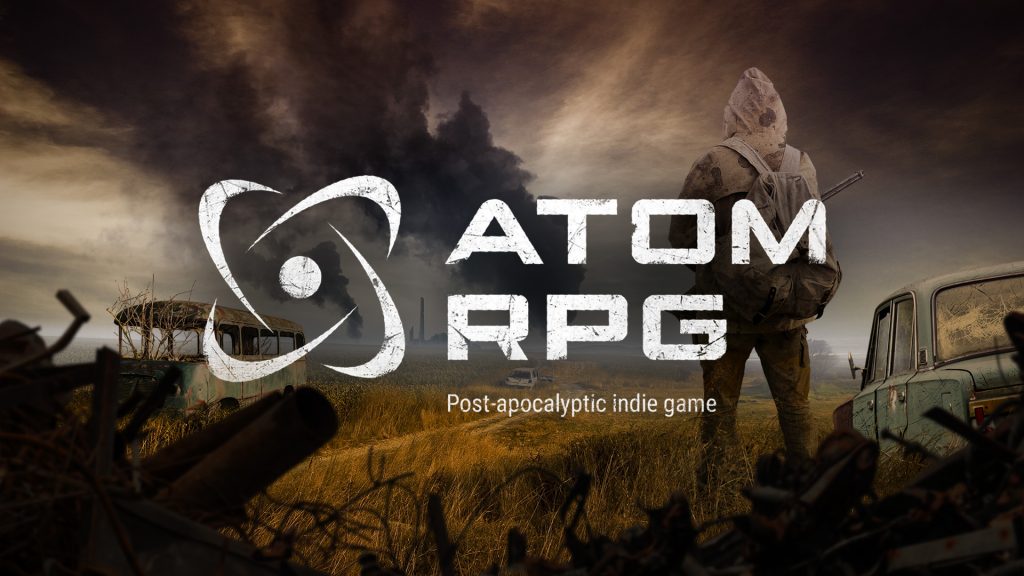 Atom RPG takes place in an alternative 2005 Russia. After the cold war went sour in 1986, the global superpowers decided to throw hands and chuck nukes at each other… and nothing was ever quite the same. Players customize their own agent of ATOM, a secret militaristic society, and are tasked with finding a wayward General in the game’s vast and hazardous  post-nuclear Russian countryside. 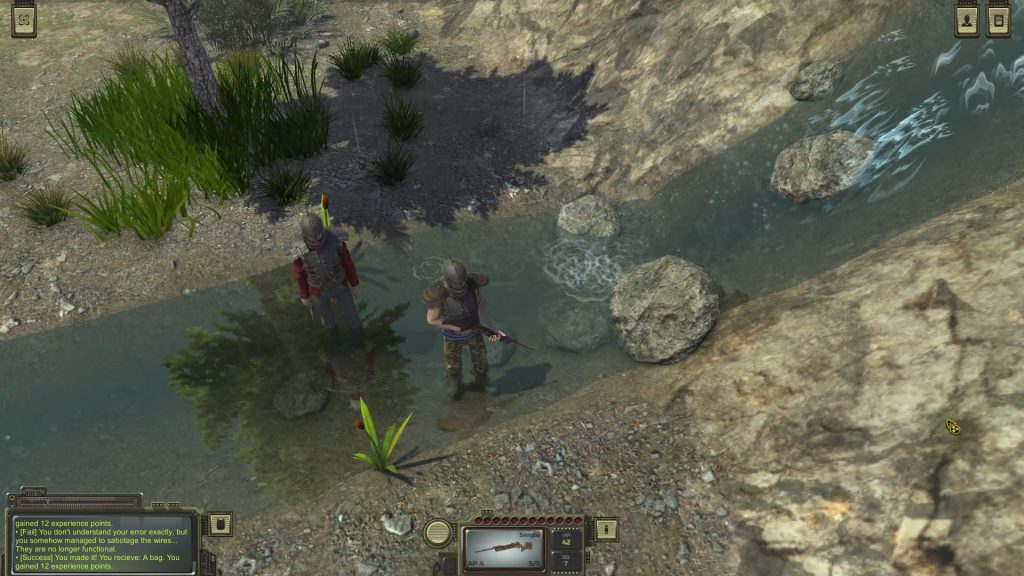 I hate to keep dragging out the tired comparisons to Fallout 1 and 2, but Atom RPG fully embraces its inspirations. Instead of the 1950s vacuum tube retro-futurism of Fallout, Atom has a dirty 1980s veneer of hard plastic and CRT greens.

Multinational European developer Atom Team hails from Poland, Ukraine, Russia and Latvia. By all appearances, this seems to be their first game as a team. They picked an ambitious task for a debut release. Atom RPG spent a considerable amount of time in Early Access after a modest, but successful, Kickstarter campaign ended in 2017. The game saw a 1.0 release in December 2018, but didn’t make it on to my radar until a few weeks ago, with the drop of an extensive quality of life update. Improved translation, better interface, better inventory management, combat and gameplay balancing, optimization… mod support?! It’s a big list. Atom RPG, you now have my attention. 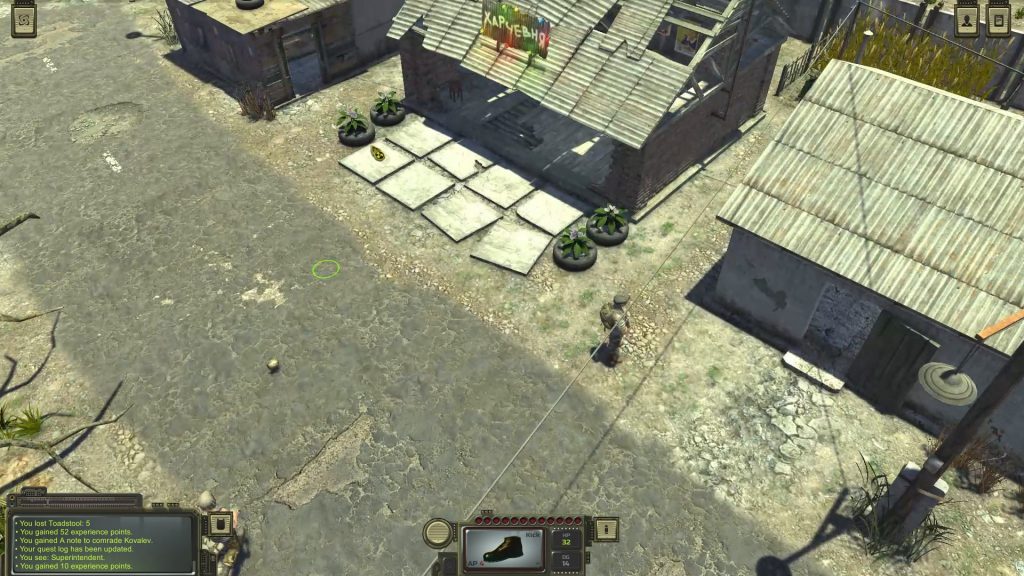 In Unity We Trust

Let’s get this out of the way: Atom RPG’s visuals are not much of a standout. Animations are a little stiff. Environments have the occasional nice smoke or fog effect, and there’s some water reflections, but the game looks dated. Still, it’s a cohesive style with some Soviet flavor, and the chosen assets all fit fine. 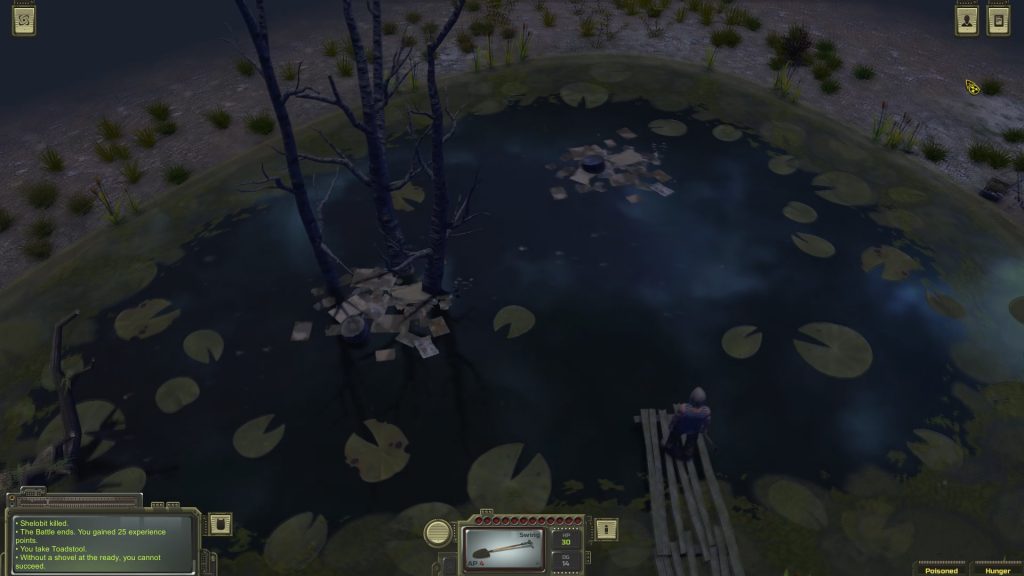 Sound effects are stock. Some of the ambient electronic tracks set the mood well, but there’s nothing here that’s making it onto my Soundcloud playlist. There are a few voiced cut-scenes, which have charmingly amateurish delivery, but decent audio quality. These scenes mostly consist of cleverly filtered stock footage, (like the talking Harry Potter newspaper with Ronald Reagan’s face) but there’s a few transitionary scenes and effects that I really quite liked. (ins first travel cutscene)

Of course, if you’re reading this installment of BACKLOG.TXT, you’re not here for thrillgasm “triple A” production values. No, dear readers, you’re probably here for the same reason I am. You wanted an old-school, down and dirty, zero-hand-holding, stat heavy, story driven PC RPG. This, dear friends, is where Atom RPG delivers in spades. 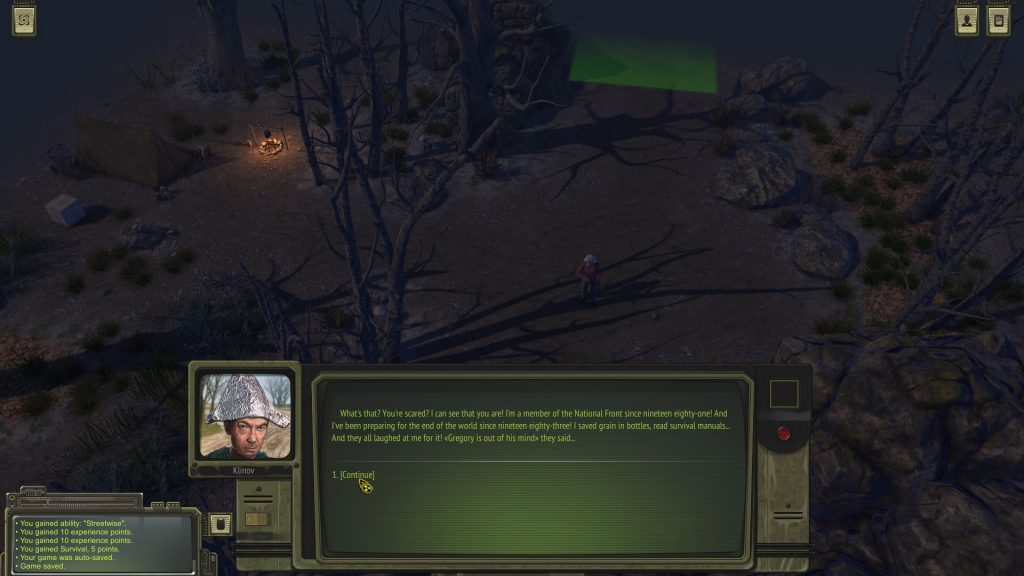 There’s so much game here. There is so much possibility. The developers claim it contains 30-100 hours of gameplay depending on playstyle, and that’s totally believable. Save a tiny commune from bandit raids. Or screw em, and join the bandits. Or leave that all behind and meet up with a science cult. Or an actual cult. Befriend wasteland travelers. Or rob them blind. Go fishing, with spider brains as bait. This is only a taste of my first four hours spent within Atom RPG. The game is abound with secrets, choices, hidden loot, and danger galore, and provides a surprising amount of actual opportunities for role playing.

Devils in the Details

Here’s a good example. I was hired by some unsavory characters to enter a vault and scope it out for loot. Upon trying to leave, they tried to rob me, and shot me to death in seconds when I resisted. So, I restored a save and figured I would hide my stuff inside the bunker. I dropped my gear inside the vault, walked outside, and got ambushed once more. Except this time, the robbers actually got angry when they found out that I didn’t have anything, and glommed onto the fact that I stashed all my stuff in the vault. And then they killed me anyways. It’s this type of attention to even the most minor details that truly elevates the Atom RPG experience. 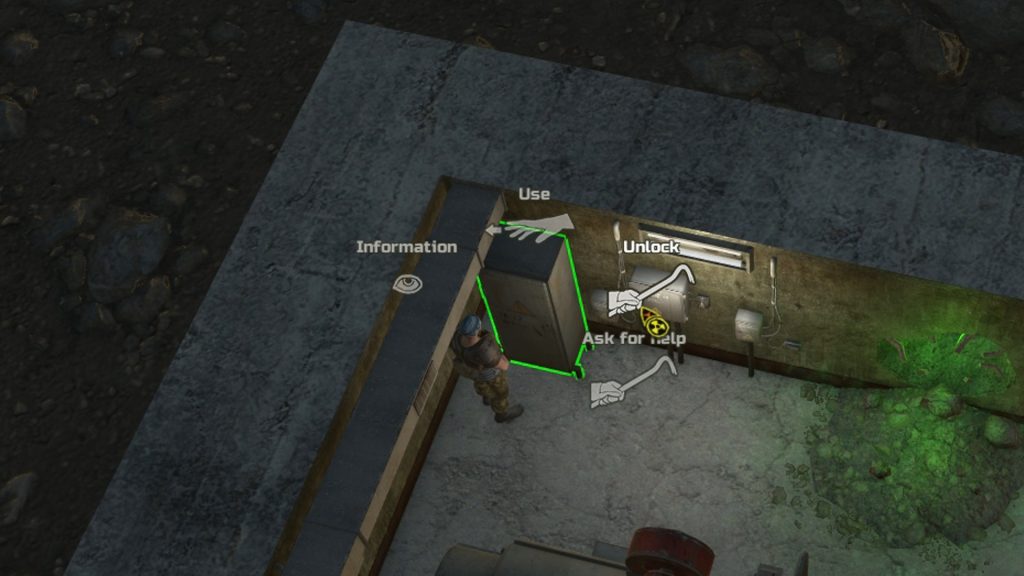 Getting All Up In Your Interface

Interface seems to be a focal point for the 1.08 patch’s improvements, and I found it to be quite intuitive. While I can’t vouch for the prior state of the game’s control scheme, Atom RPG now uses a simple left click to move and interact. Left click and hold brings up a context menu to use your skills. Inventory items can be easily sorted and dragged around between your companions, and trading works… well, pretty much the same way as it does in Fallout, if we’re being honest. 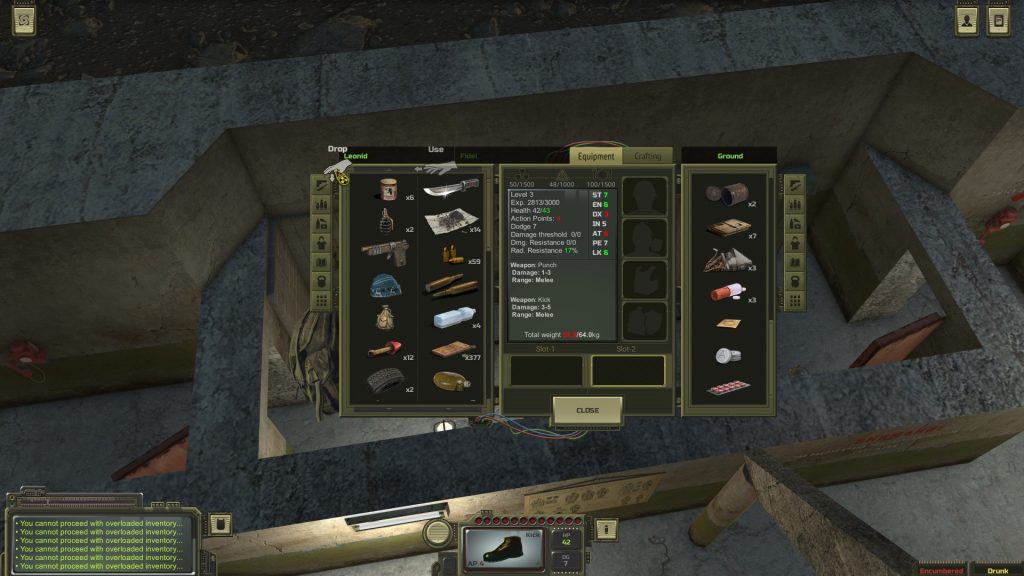 Even the dialog and trade interfaces borrow heavily from Fallout 1 and 2.

Adversaries abound in Atom RPG, and before long you’ll be battling bandits, behemoth bugs and malformed mutants. This all takes place in turn-based tactical encounters. The early game is melee-intensive, and due to scarce ammunition, you’ll need to keep a knife or two on hand. Later encounters waste no time ripping you apart with machine gun-toting thugs. Fortunately, several early side quests and some skillful scavenging will net your ATOM agent what they need to survive. 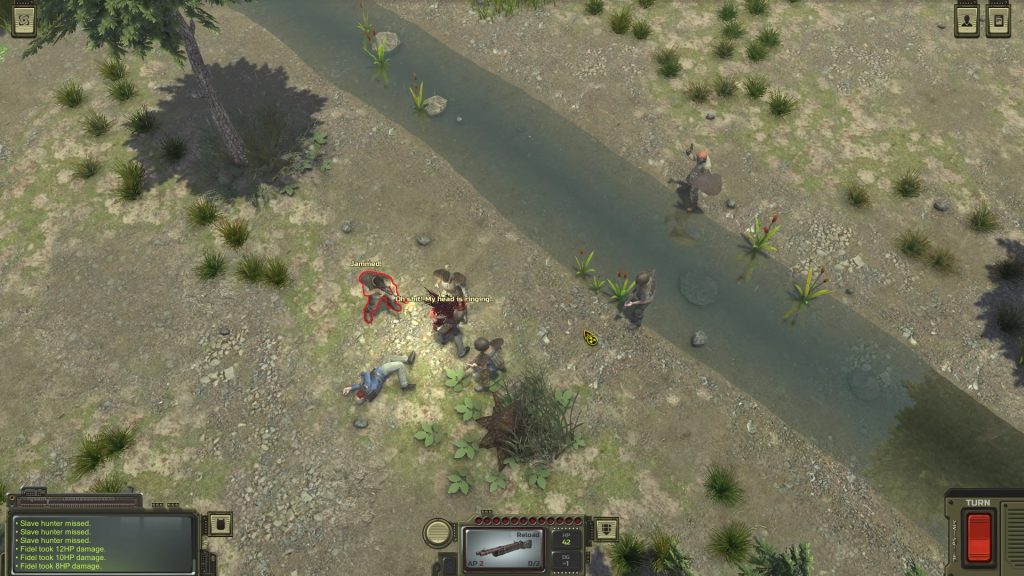 The Art of Crafting

Thanks to a bigger focus on crafting and scavenging, Atom RPG’s world has a much more DIY feel. Three-barreled shotguns and homemade tire armor are pretty common in the wastelands. I personally loved this look. A post-nuclear world would rightly be short on usable firearms, and the homemade guns and rusty pistols you do manage to find are prone to failure. This gives combat encounters another level of tension, especially when a finishing blow is waylaid by a badly timed weapon jam.

Not all of your interactions will be hostile, of course. Each wastelander has a little bit of personality, and their own dialog trees. There’s plenty of referential humor (ins cult conversation), and this is all colored a bit by the translations. To be clear, translations aren’t perfect here. Some might find this to be an immersion breaker due to the large amount of text. I found it charming. Atom RPG’s vast Russian wasteland often feels like a Bizarro-world Fallout, and I couldn’t be more pleased at this. 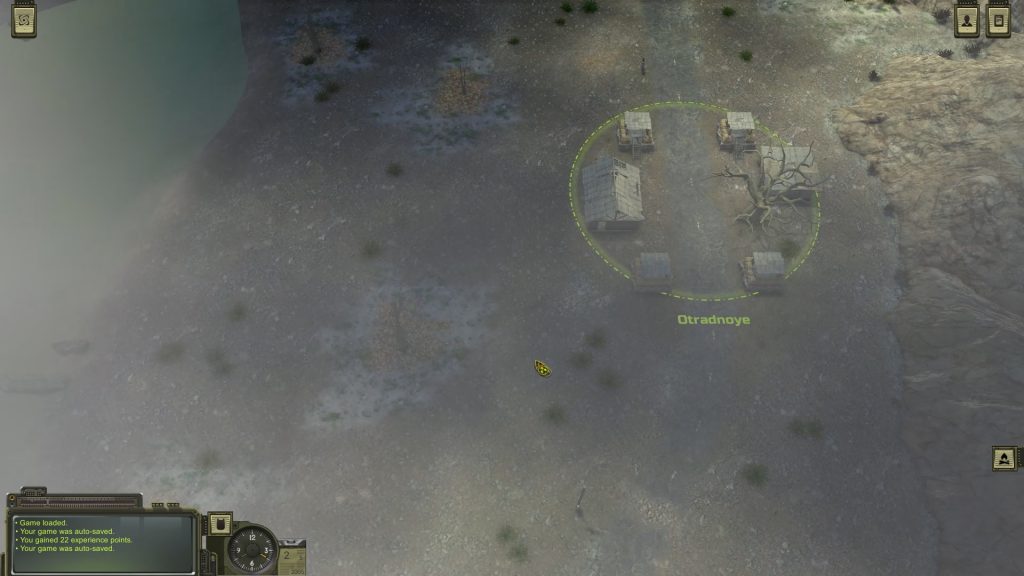 A vast and mysterious map is laid out before you from the game’s start.

Atom RPG is a great entry into the sandbox-style role playing games of old, and would be right at home alongside those cherished titans. It’s clear that Atom Team loves Fallout, but it’s even more apparent that they care about Atom RPG. Another huge content patch was announced recently, and I eagerly look forward to further travels in this alt-future wasteland.

In my long years of scavenging the gaming wastelands, I’ve found a few true treasures. This labor of love stands tall among them.