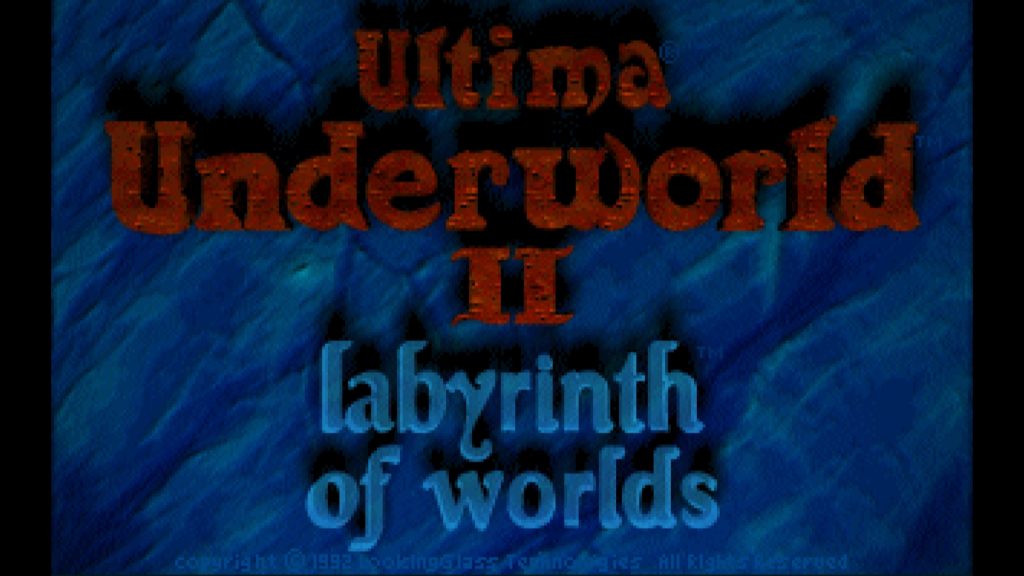 Welcome to Part 2 of a very special BACKLOG.TXT – diving deep into Ultima Underworld II, grandfather of the immersive sim genre.

Underworld Ascendant, a long-awaited sequel and successfully crowdfunded dungeon crawler, came out on November 15th. Unfortunately, the followup to this classic series of immersive RPGs was released in an embarrassingly broken and unfinished state. Curious about the new game? Check out the impressions on Topless Robot – or watch the video breakdown on the 2 Headed Hero YouTube channel.

This week, we’ll be taking a look back better times – my personal favorite of the trilogy…

Despite the disappointment of the sequel’s release, I have decided to devote a giant chunk of the last couple months to the first two games in the Ultima Underworld series. If you missed out on Part 1 (which included a detailed breakdown of Ultima Underworld: The Stygian Abyss), you can catch up right here. Prefer to watch? Then check out the 2 Headed Hero episode on YouTube!

Ultima Underworld II: Taking A Break from The Stygian Abyss

I did manage to finish the first Underworld game, but near the end it seemed to drag on. I actually needed to take a break from the game during the last legs of my hike through the Stygian Abyss. When the game mentioned the word “maze” for the fifth or sixth time? That was a good enough reason as any to distract myself with Ultima Underworld II: Labyrinth of Worlds.

Ultima Underworld II came out just nine months after the release of the first game, in January of 1993. There’s a surprising amount of improvements in this game over its predecessor. Unlike the first game, Underworld II was designed from the ground up to be a mainline entry in the Ultima series and takes place one year after the events of Ultima 7. It also has a much more interesting premise. 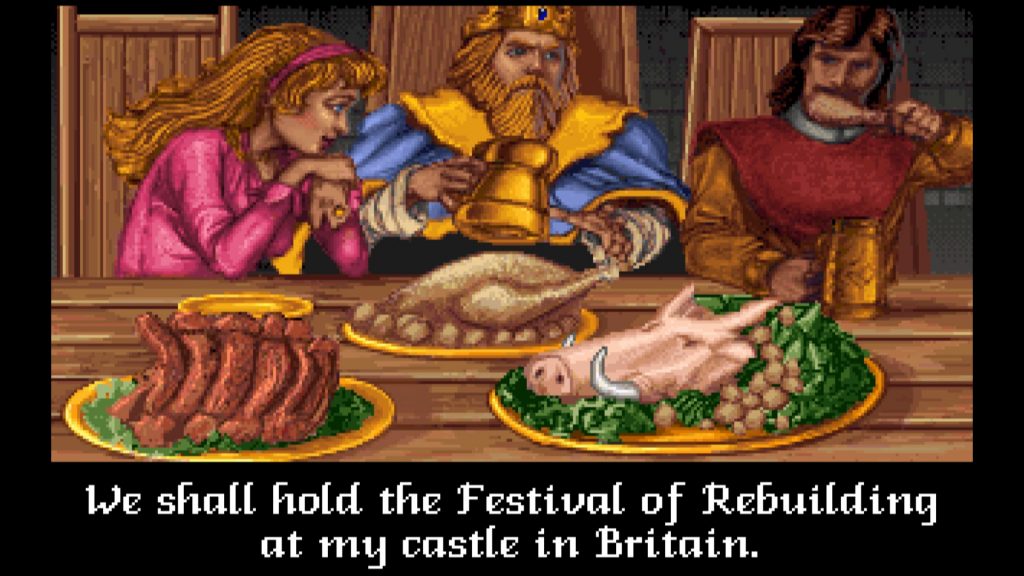 The Guardian: A Titanic Red Monkey with Terrifying Power 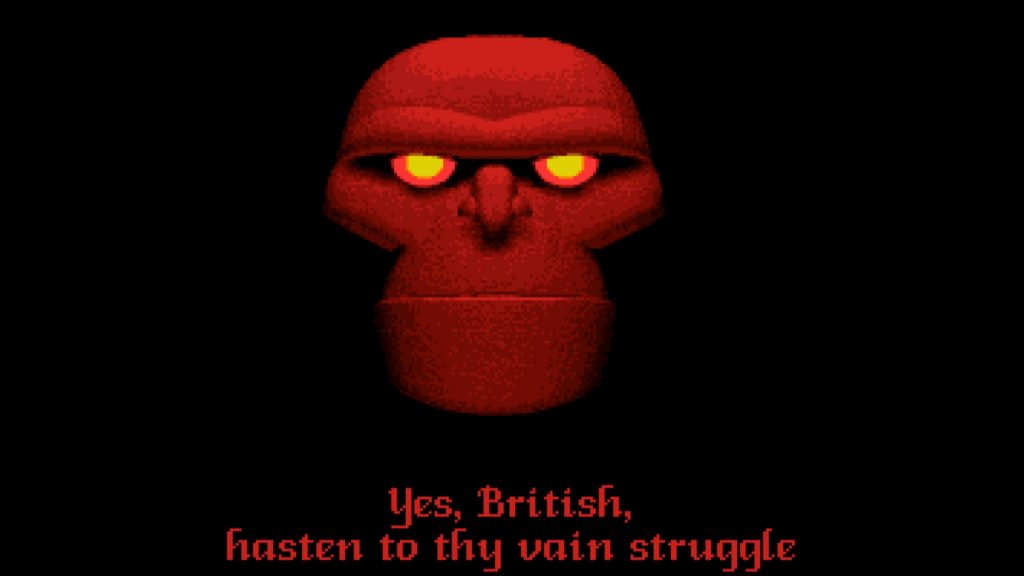 He’s not monkeying around.

Players once again take on the role of the Avatar, who is invited to a huge celebration at Castle Britannia as a guest of Lord British himself. The Guardian, a titanic red-faced monkey and longtime enemy of the Avatar, chooses this moment to trap the inhabitants of the castle in a giant sphere of magical black rock – which is suitably known as blackrock in the game. It’s up to the Avatar to once again disrupt the Guardian’s plans and find a way to break the barrier before the castle’s inhabitants all starve to death. 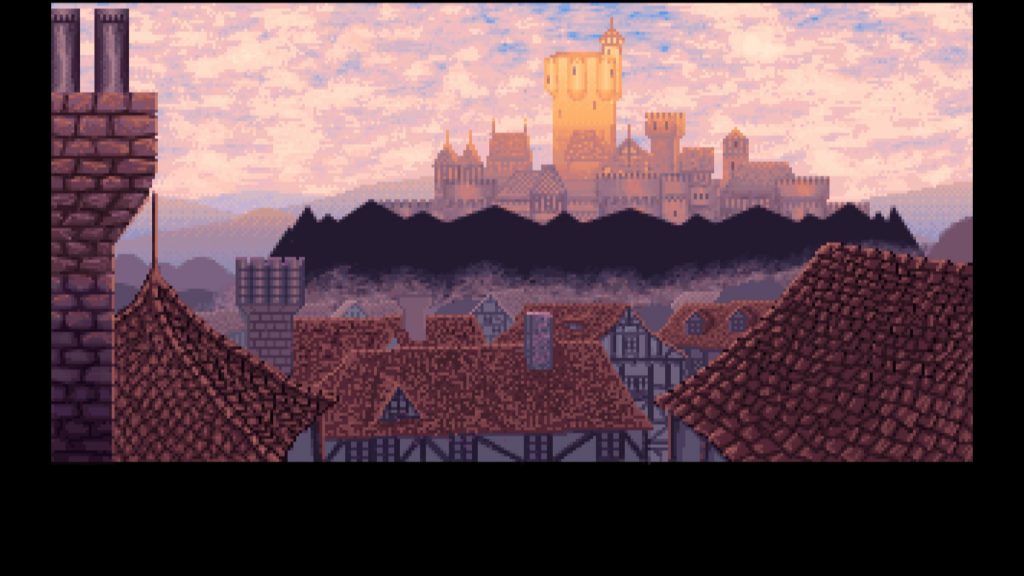 This is not the plumbing backing up. This is blackrock.

Early on, you stumble across a flaw in the Guardian’s spell. This flaw takes the form of a big glowing gem in the castle basement that can transport the Avatar to other worlds and dimensions. You quickly find out that each of these worlds has suffered in the wake of the Guardian’s influence. You also find out that each world holds a key to freeing Britannia from the monkey-faced titan’s magic.

A Step Above in Graphics Quality

Like I said before, there’s a lot of noticeable improvements here right off the bat. For one, the view screen is a lot bigger. Graphics are much nicer, too – no more chunky black outlines around everything. There’s a lot more variety in the character graphics and nicer portraits in the conversations. The environments look more crisp and detailed. There’s some weird stuff with the lighting when you look all the way up or down – chunky black triangles appear in the corners of the screen. Still, Underworld II looks a lot more polished and cohesive than the first game. 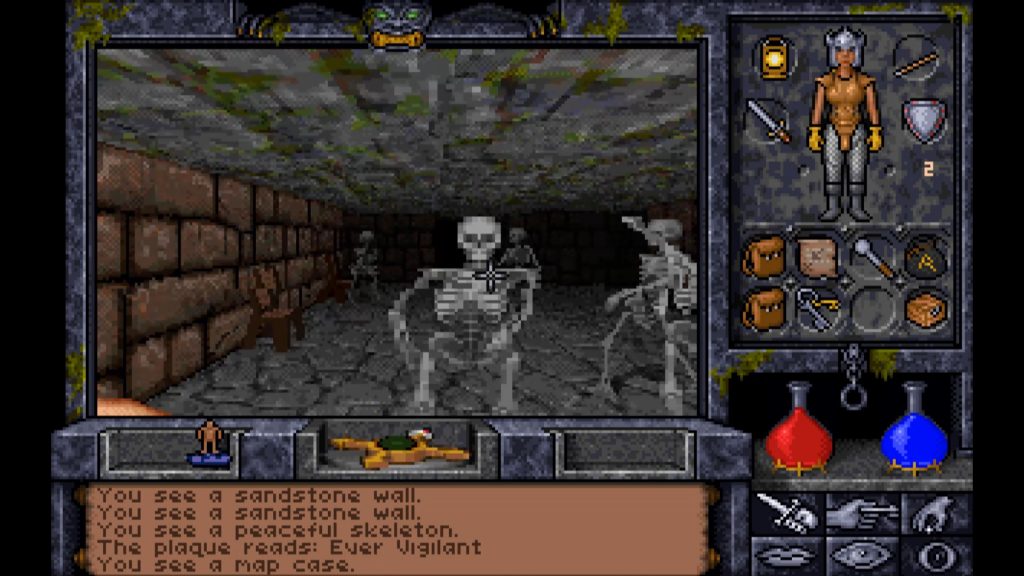 Rejoice, for there are also far more skeletons.

Unfortunately Underworld II also suffers from sound issues, at least on my Windows 10 rig. When starting up the game for the first time, there was a surprising lack of background music during the intro. Strangely enough, after making my Avatar and checking out my room, I noticed that the sound effects were much higher quality. Footsteps sounded like footsteps! Punches sounded (kind of) like punches! But – still no music.

So I went back to forums, and messed around again in configuration files. I managed to get the music working, but the nicer sound effects were gone, replaced with the same farty MIDI noises as the first game. Apparently there’s supposed to be speech that plays when the Guardian taunts you throughout the game, but I couldn’t get it working. Oh well, close enough. Time to dig in. 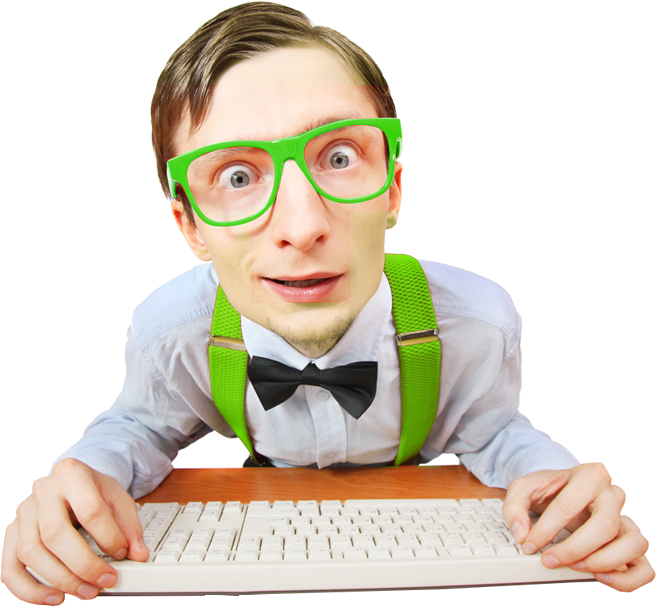 CASUAL! Can’t even figure out how to get the sound working right. Just build a retro PC already, NOOOOB.

Yeah guys, I’m not gonna do that. The Sound Blaster jams will be good enough for me. I want to actually PLAY the game, not screw around with audio settings.  But again, your mileage may vary here. Those more patient may be rewarded with superior effects and music.

The soundtrack in Ultima Underworld II is… sufficient. The songs are not nearly as iconic as the first game’s excellent fantasy movie style soundtrack, and some of the worlds have pretty obnoxious and repetitive tunes. (Talorus’s music is a good example of one of the more grating tracks.) There’s a few good standouts, though – like the Blackrock Prison or Ice Caverns themes.

Stacking Up Against The Stygian Abyss

How does Ultima Underworld II compare to the first game? Well, Underworld II makes a good amount of improvements, but still repeats some of the mistakes of the first game. Character creation, the magic system, the automap, and the controls all work the same way as they did in Underworld I, for better or worse. There’s a few more spells, but the useful ones are familiar. The “game over” spell (Armageddon) makes an appearance again, in case you feel like ruining your playthrough completely.

Instead of the hassle of finding shrines and chanting mantras, you now visit trainers to boost your skills. 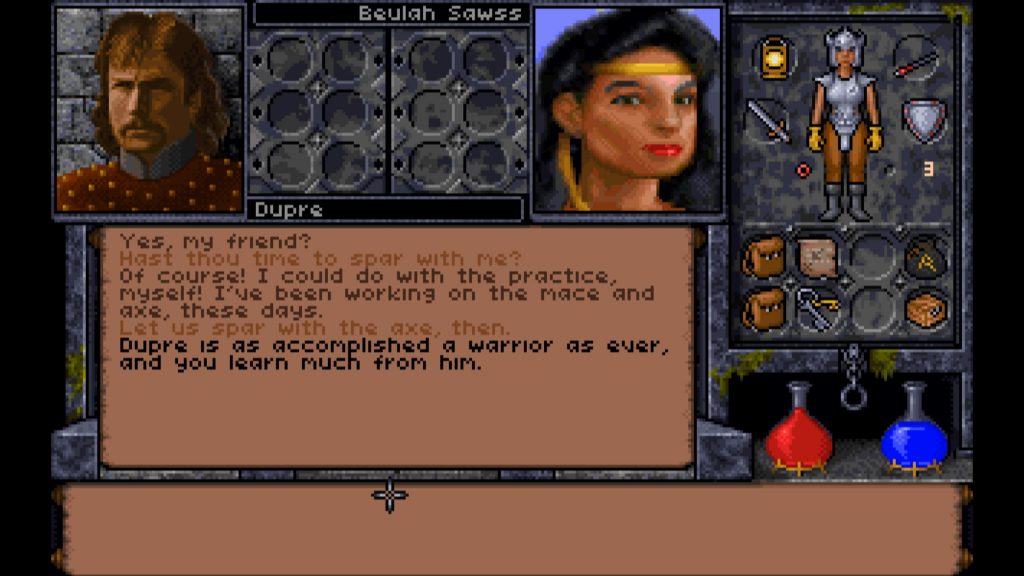 Dupre: a drunk warrior in charge of showing you what end of the axe goes in the bad guys.

This is still kind of a pain rather than being able to level up on the spot, but at least most of the trainers are located within a single level. As in the first Underworld, taking Sword, Casting, and Mana skills will get you through the meat of the game. There’s still no reason to take most of the other skills at all. This feels like a huge missed opportunity.

Tell Me A Tale

Underworld II does a much better job with investing players in the story. Rather than the first game’s approach of setting you loose in a gigantic spaghetti dungeon, Castle Britannia acts as the Avatar’s central hub. Recurring characters from the mainline Ultima series make appearances here. As you progress, your conversations with these characters help drive the plot onwards. There’s even some interesting problems that can’t be solved with the edge of a sword, such as negotiating the end of a servant strike.

The pacing and structure of Ultima Underworld II seems a lot more streamlined, even though both games clock around 30 hours. While there’s still a bit of backtracking, there’s much less feeling of repetition due to the sheer variety in the worlds you visit. It’s a bit more linear, true, but I consider this to be a good thing. The sprawling spaghetti dungeons of the Stygian Abyss often left me feeling frustrated and directionless. In contrast, Labyrinth of Worlds put clearer goals in front of the Avatar.

One Step Forward, One Step Back

For everything that Ultima Underworld II does better, there’s plenty that seems like a step backwards. Remember how I talked about how bad the platforming is in the first game? Underworld II doubles down on it. 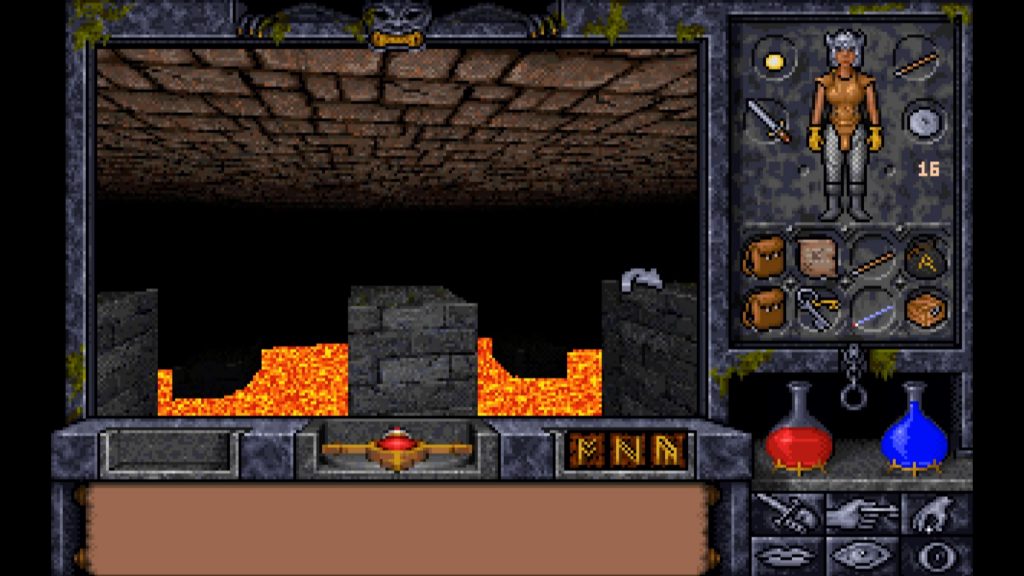 Audible sighs should not be the initial reaction to a puzzle.

This particular type of puzzle? The big square rooms with tiny columns you have to jump on? It shows up around half a dozen times throughout the game. (Maybe more.) It sucks just as much each time.

On the other hand, there’s some fun and creative puzzles as well. In places like the strange world of Talorus, the Avatar has to find the way to propagate a new subspecies of highly specialized alien. A particularly long puzzle near the end game challenges you to contain an air elemental within your body. And then, there are a few dialog puzzles that can help you avoid tough combats by using a little bit of brains.

Hack, Slash, and Hack Some More 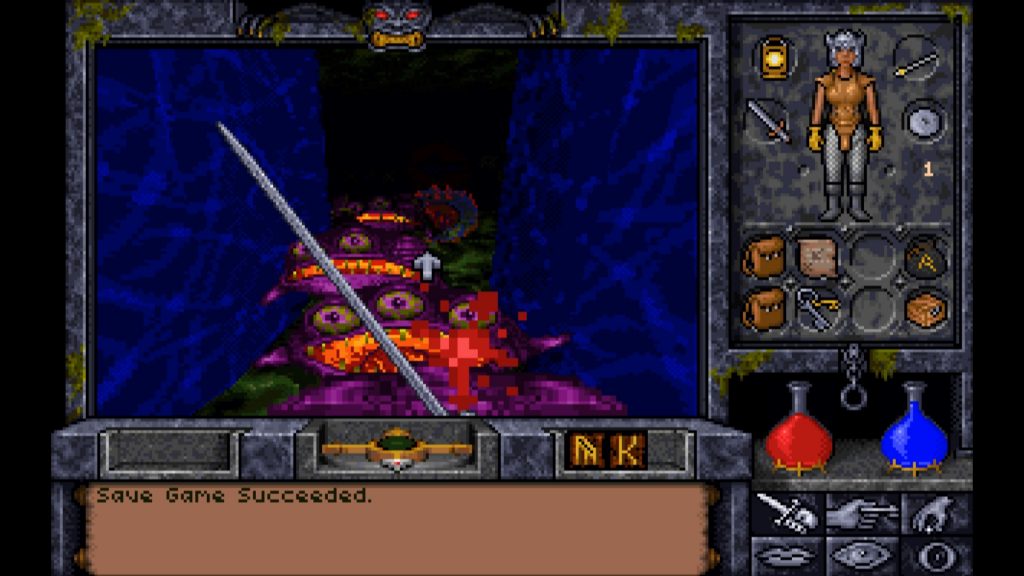 The sequel has no problem with throwing hordes of enemies at you.

For better or worse, combat in Underworld II works the exact same way as the first game. You’ll often be battling a dozen or more monsters at one time. Once one monster becomes hostile, it seems like many of the other enemies in the level beeline it towards you. There’s a lot more wide-open spaces here, and it’s easy to get surrounded. There’s even an obligatory hell level fight. 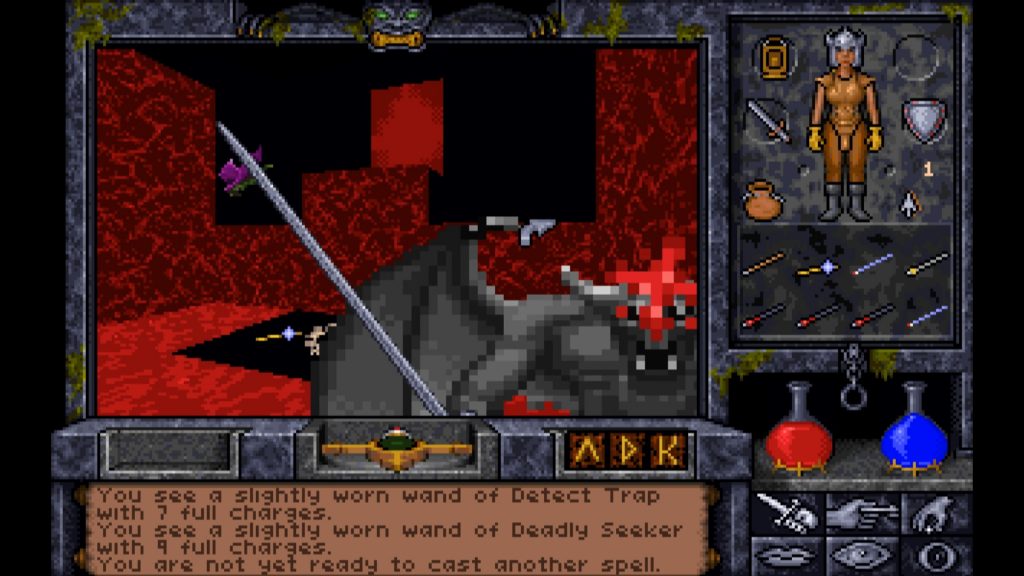 Eat your heart out, DOOM.

Some of the more important opponents are damage sponges, which just become super tedious to defeat. Certain items can also make a lot of the combat pretty trivial, such as the Sword of Stone Strike or the Flameproof Vest. Hope you picked Easy difficulty again. Otherwise, your mouse hand will get tired, or you’ll be seeing that game over animation a lot. Or both.

Better Times To Be Had

Despite all my previous complaints, I actually had a better time with Ultima Underworld II. Both games have merits, but Underworld II had more memorable characters and more unique environments. It was interesting to see the results of the Guardian’s influence on the other worlds, and having a big red ape taunt you throughout your quest did far more to build up the urgency of the Avatar’s task and establish the antagonist.

After spending the last month and a half playing Ultima Underworld I and II, I can understand the allure. Not everyone will share that view. Both games are somewhat unrefined, and the learning curve is pretty high. Gamers that have the patience to trudge through the arcane systems will feel like wizards themselves after puzzling through the ins and outs of the Stygian Abyss and Labyrinth of Worlds. I can only hope the highly-anticipated Underworld Ascendant takes immersive sims to the next level by adding more player freedom, more compelling characters, and – especially – more modern controls.

Does Underworld Ascendant live up to its predecessors? Keep an eye out for a full examination on Topless Robot! Prefer to watch? Check out the video breakdown for both of the previous Ultima Underworld games on 2 Headed Hero!