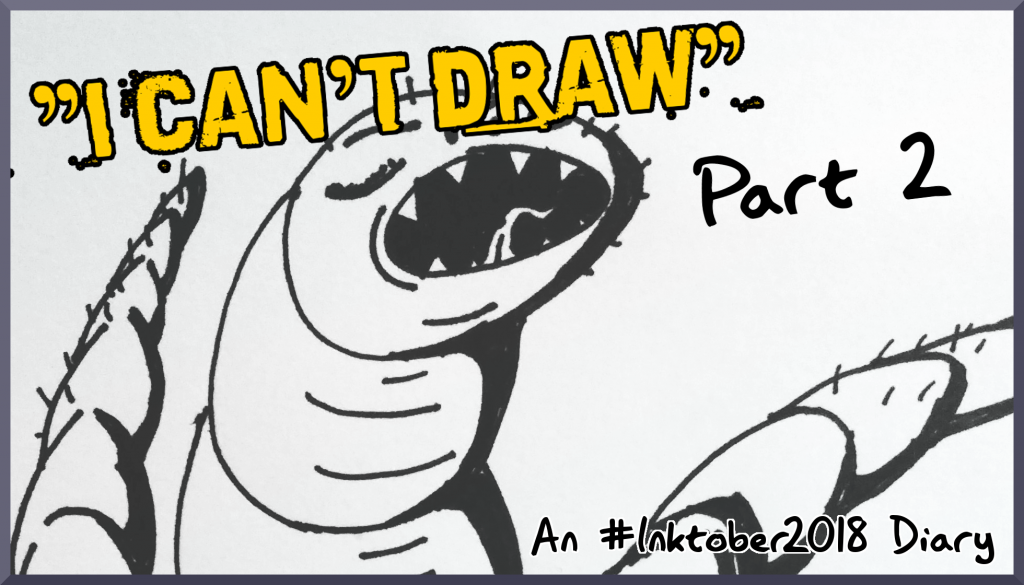 Now that I had begun my journey into Inktober 2018 and cut my teeth on the first ten days of prompts, I was filled with courage. Readying my trusty sketchbook and ultra-fine-point Sharpie, I dug in.

Would this new level of preparation help my neglected skills? Well… 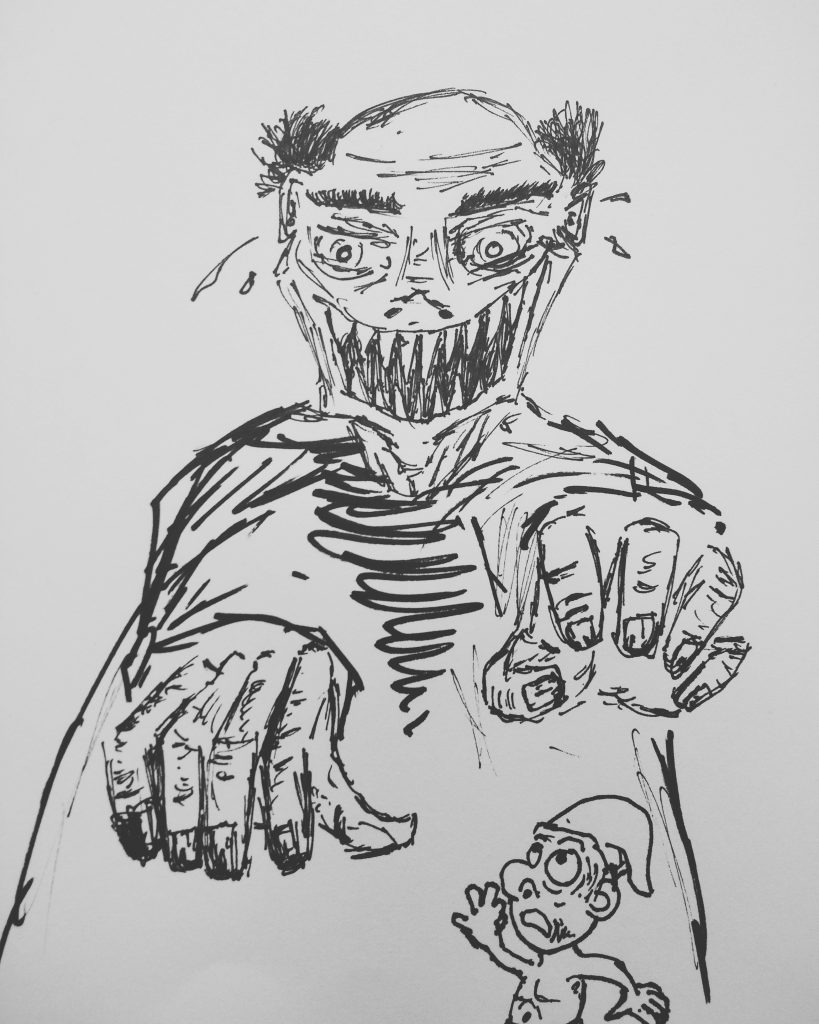 Nothing’s more cruel than Gargamel, and his quest to eat tiny sentient beings for no good reason. As for my technique? I mean, the Smurf looks a little cleaner, even though I decided on making him a bit more anatomically correct.

Gargamel’s thousand-yard stare was my real focus here. Bringing in a bigger pen for shading was my downfall though, I feel like it ruined the scratchy insane feel.

Obviously this wasn’t really working out. So with a long, dejected sigh I put down the pen and took a break to look at some…

Here’s a souped-up Mad Max style warboy from the quieter half of the 2 Headed Hero, Rollinkunz! If you follow my column BACKLOG.TXT, you probably expected him to pop his head up here: 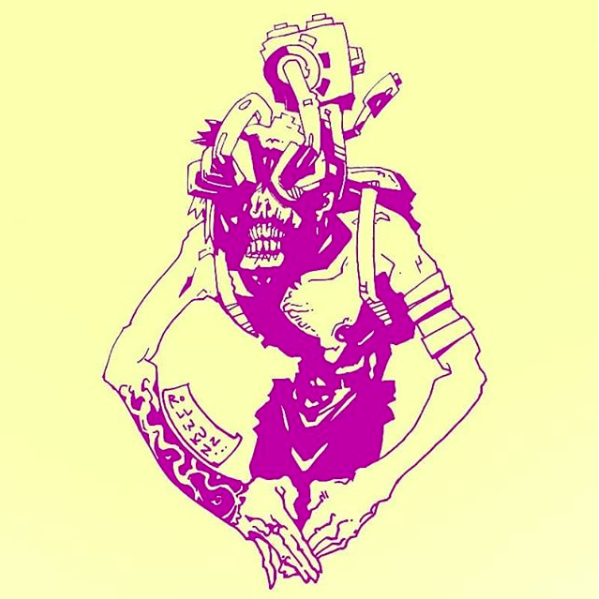 A souped up warboy on a one-way ticket to hell.

Rollin’s other Inktober submissions have been using the prompts for a unique take by making them into a rudimentary choose-your-own-adventure on Twitter. Check out his take on Day 3, “Roasted”: 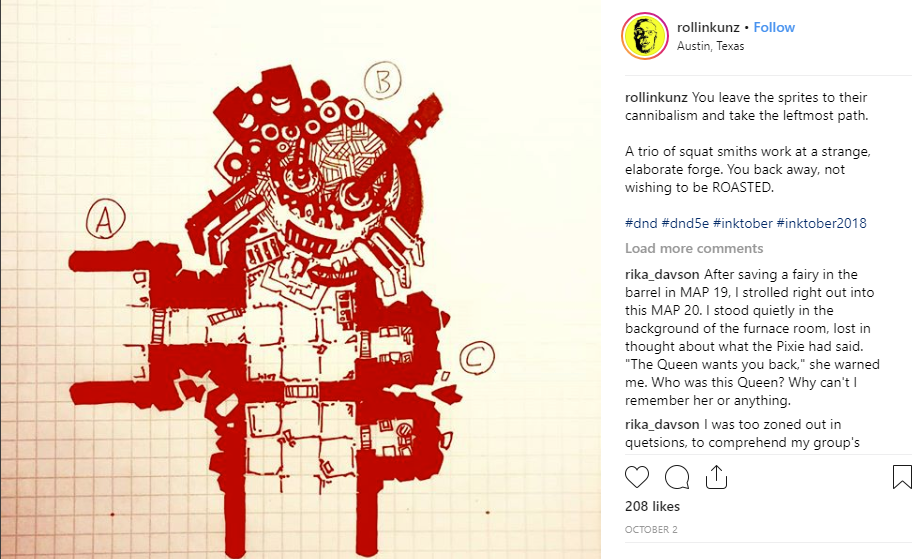 Ellie Maybe is a cook, musician, writer, and the head food nerd behind the Culinarie Kit chef box subscription service. She submitted some decidedly more honest and personal takes on the Inktober prompts: 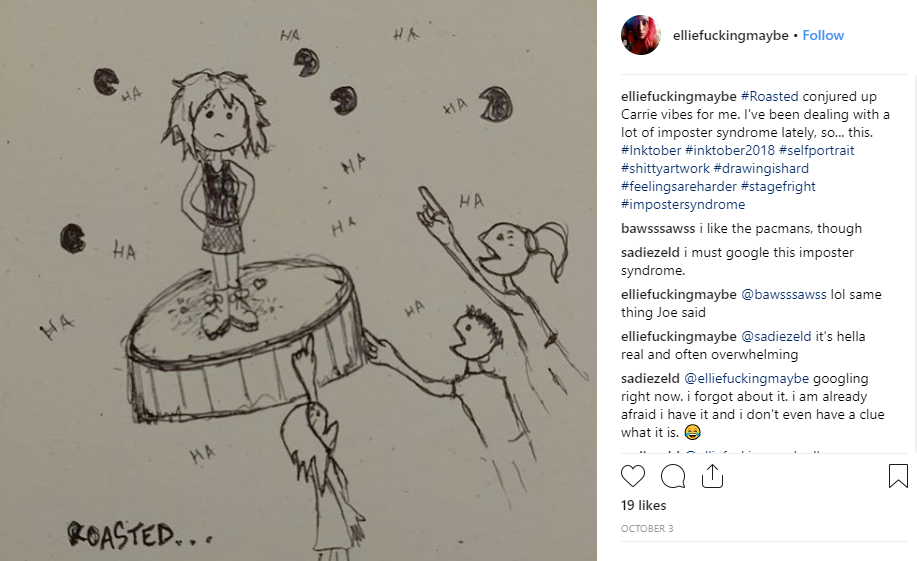 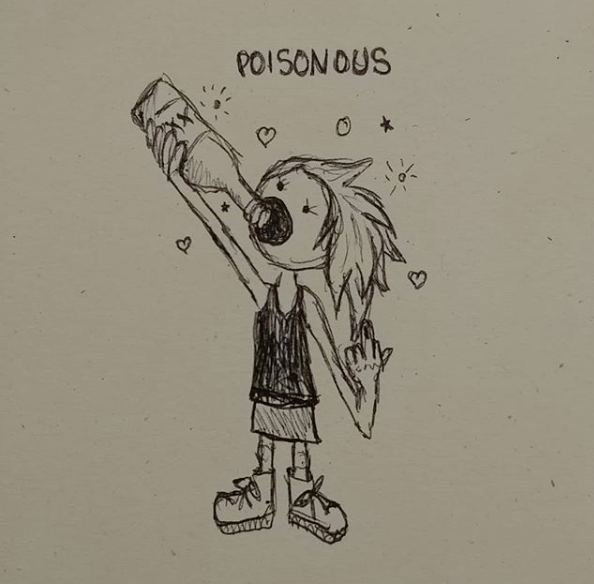 Oh. Well, looks like she and I both found some common ground for Day 1’s prompt, “Poisonous”.

Inktober 2018: Getting Back On the Horse 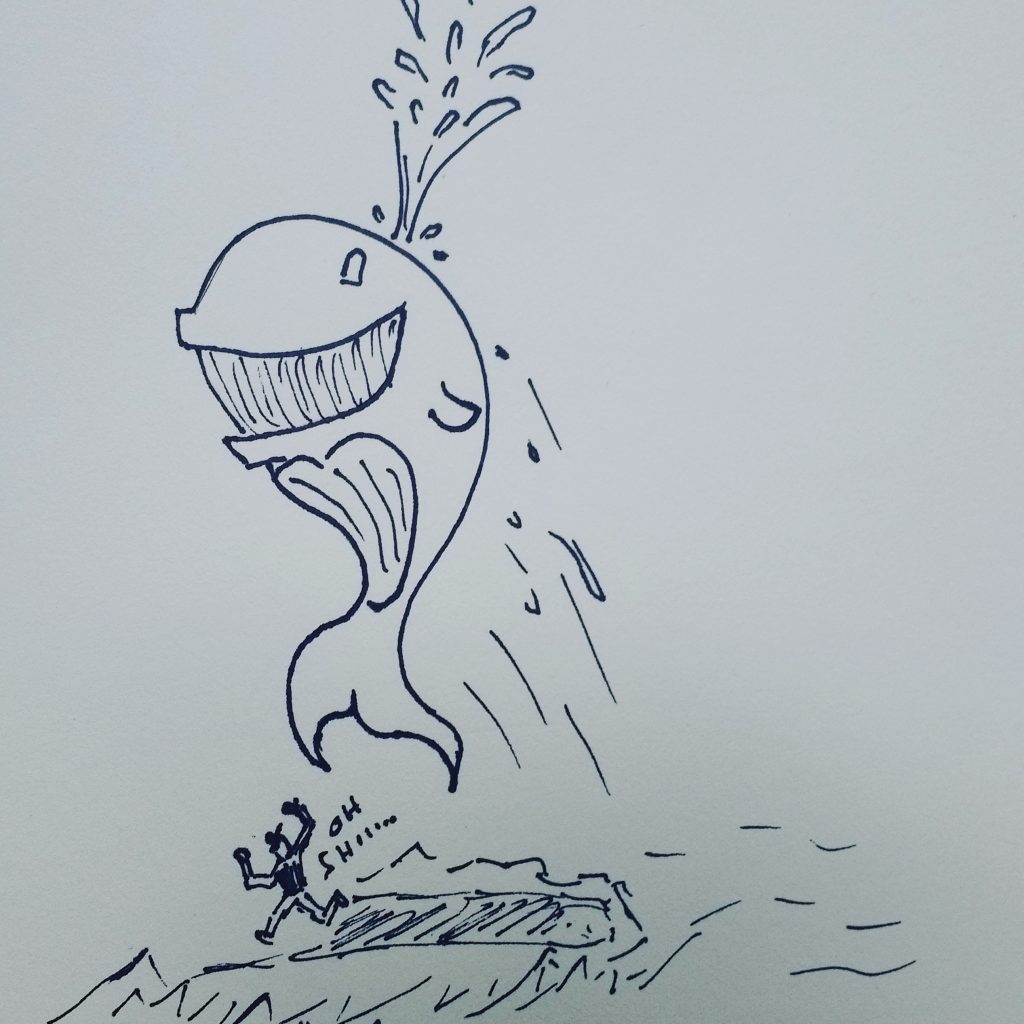 Now that I was caught up on the backlog, I experimented with doing some cleaner lines. I think the whale looks pretty good overall, but didn’t know what to do for the foreground. So, uhhh… I guess it’s sort of a reenactment from the beloved 1993 family-friendly animal movie, Free Willy. 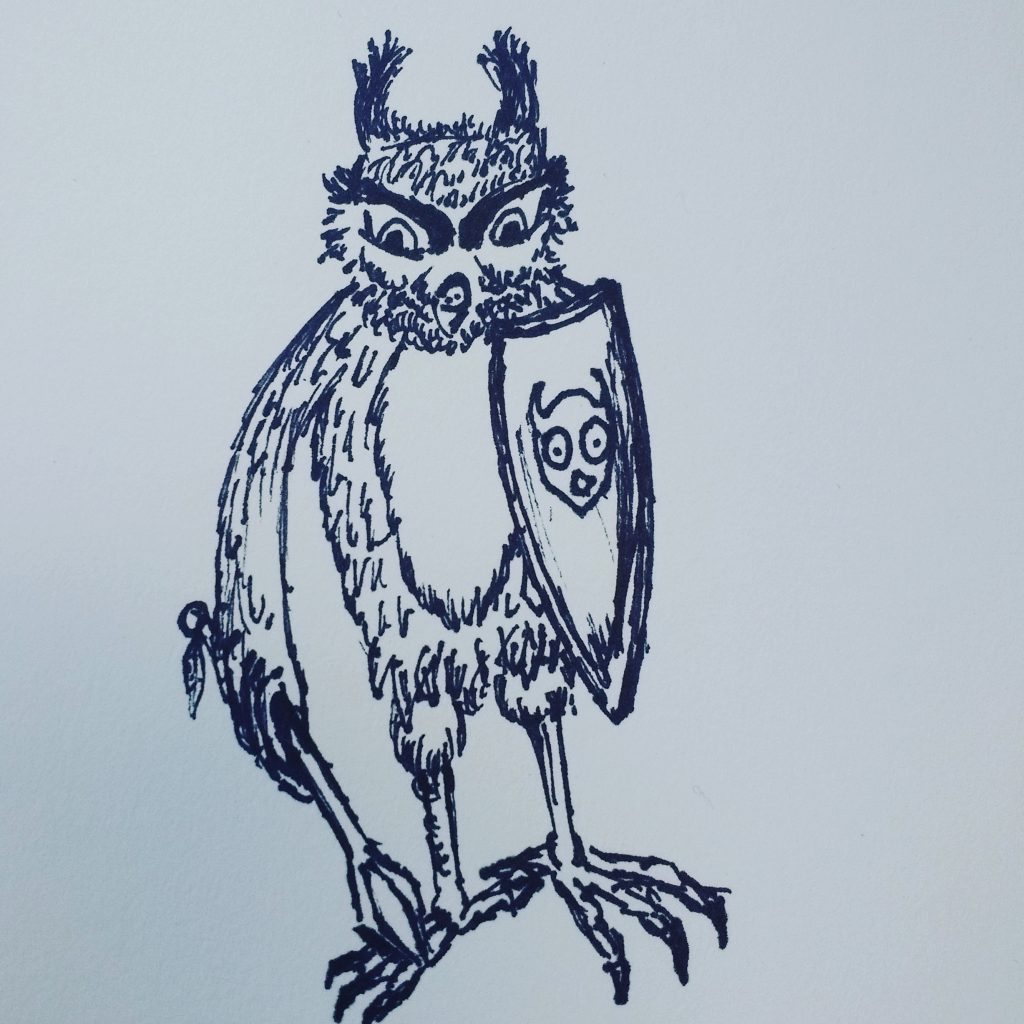 A mighty pOwladin, here to defend justice and eat field mice. Plus since his head swivels nearly 360 degrees, no owl rogues can gain advantage on him. This one turned out a little scratchy and flat looking. I wish I could have done cleaner lines on the shield, but overall I like this one nearly as much as the whale. 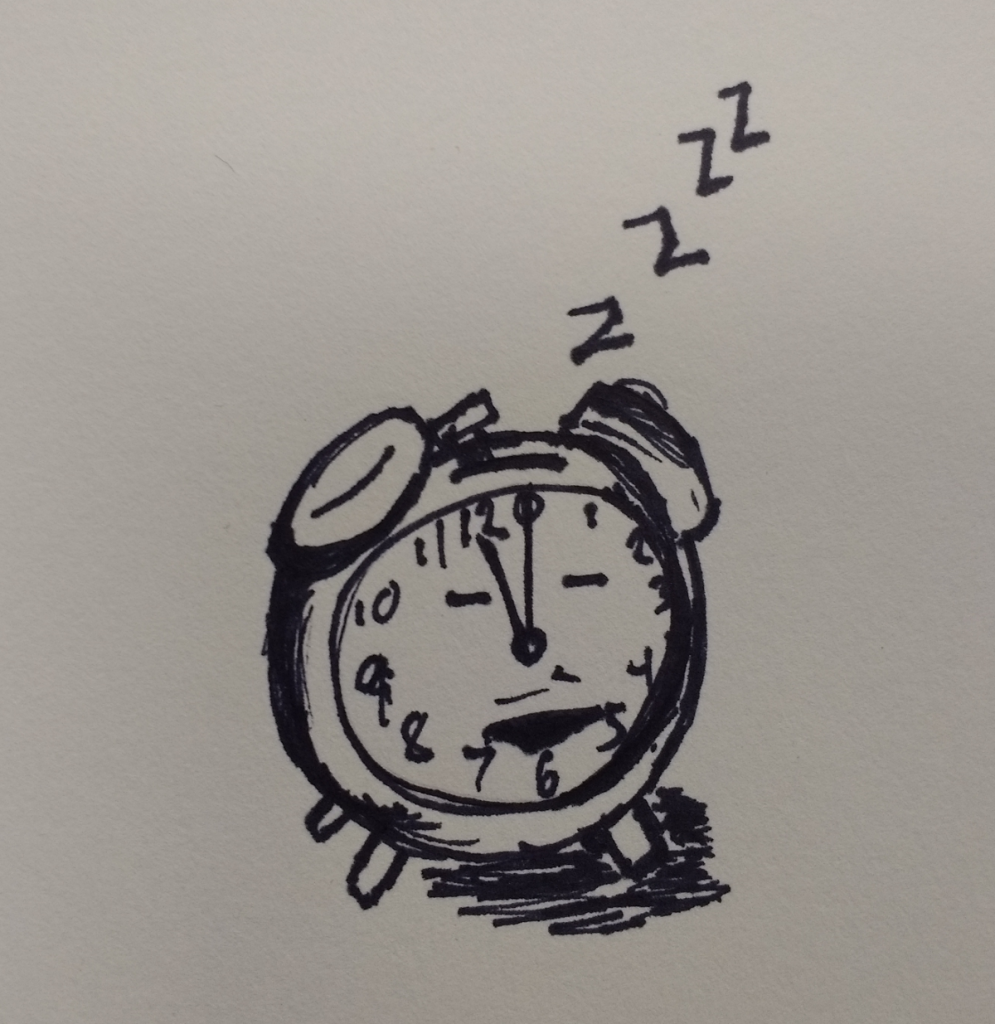 I drew this sleepy little guy in about 5 minutes. And it shows. As far as Brave Little Toaster rejects go, it’s OK I guess.

I just imagine this guy shouting in the mirror: “Give em hell, sonny boy! One arm at a TIME!”
Maybe some Def Leppard blaring in the background. The detail’s kinda overboard in this one – got a little busy with the face and obscured it. Shame. 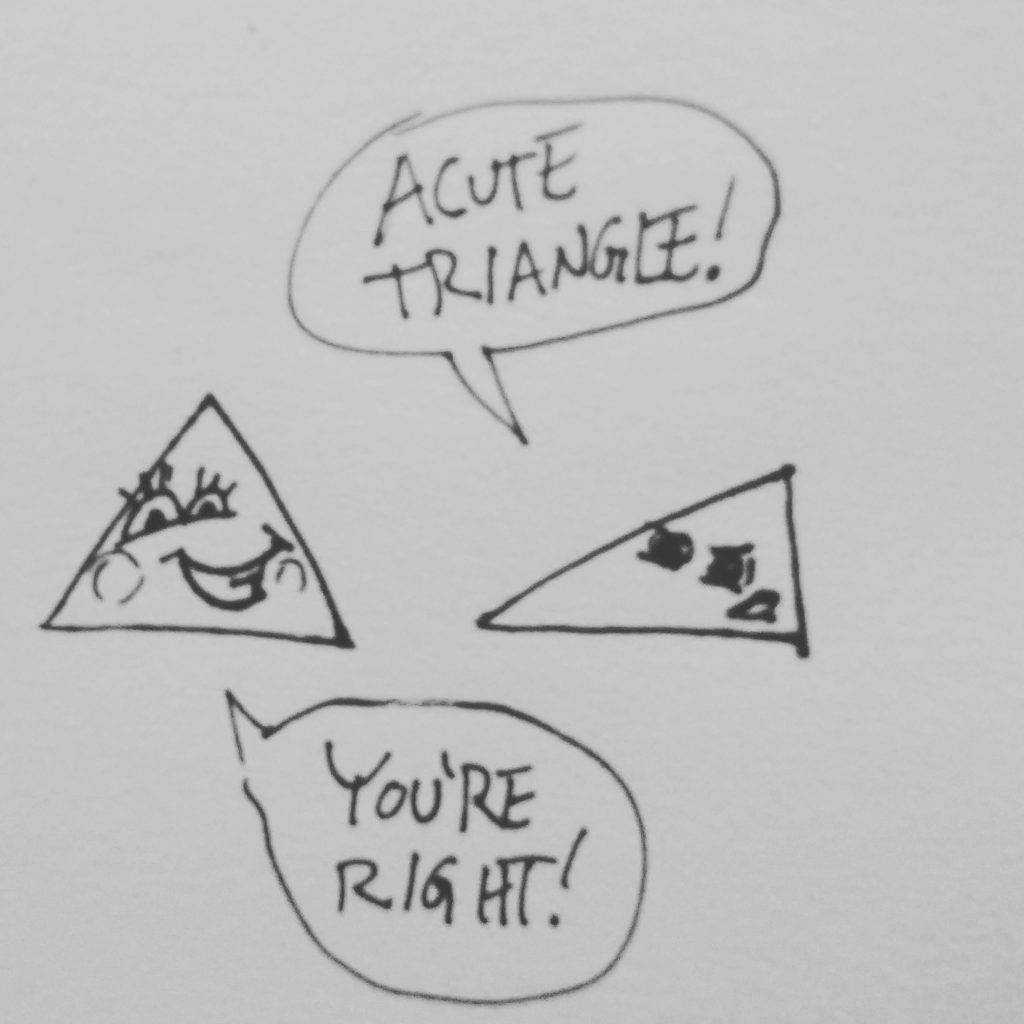 I just couldn’t help myself.

I am more sorry about the blurry picture quality than I am about the bad puns. 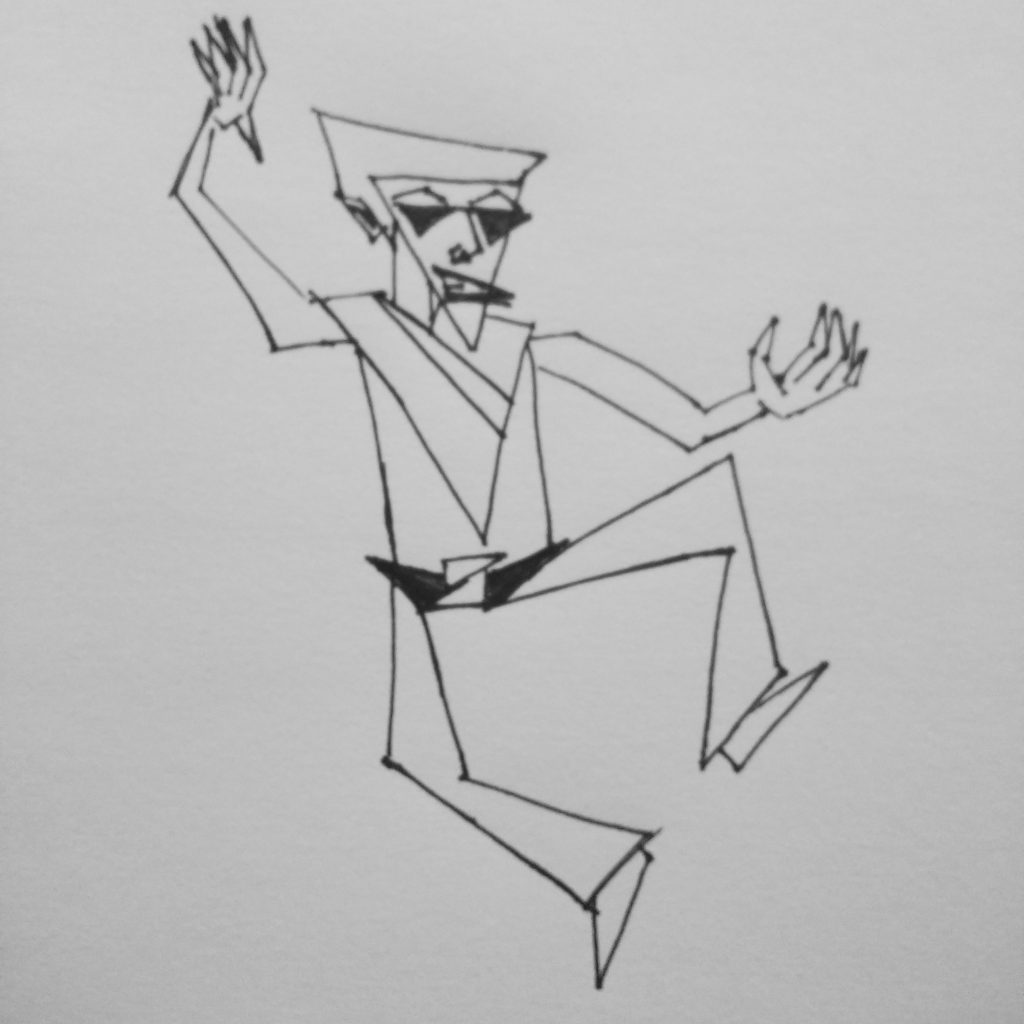 Lord, Why Hath Thou Forsaken Me? 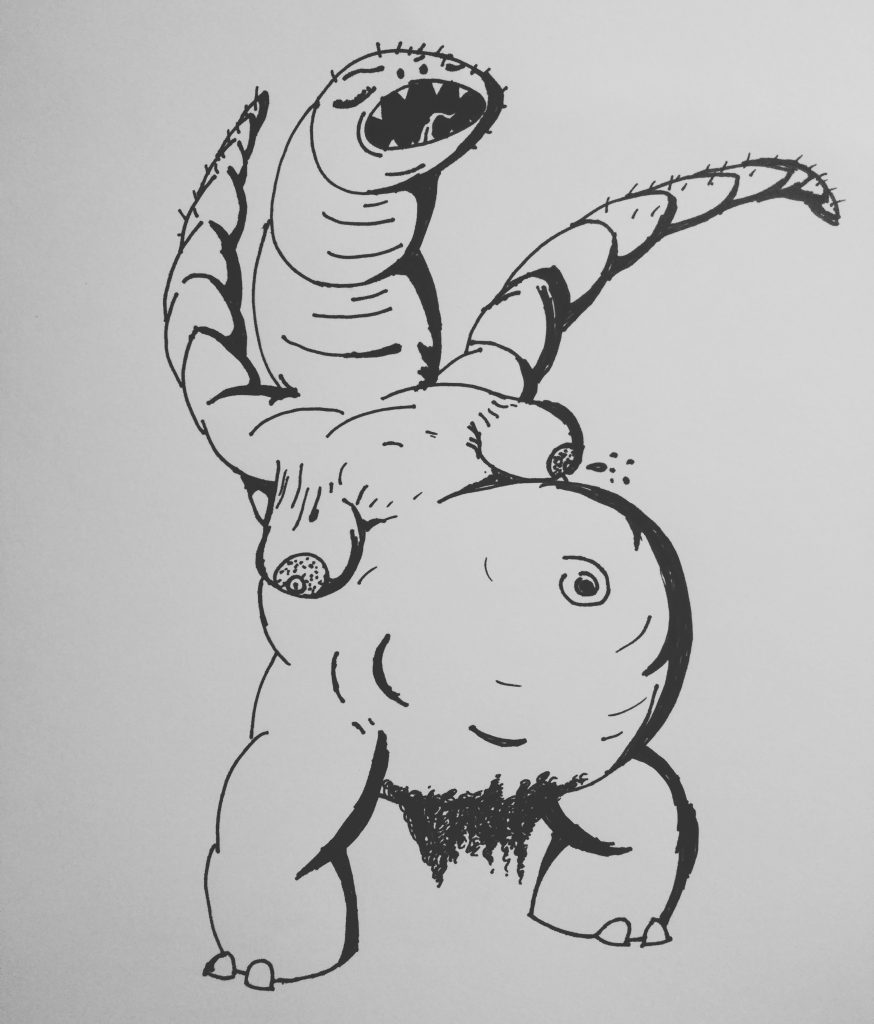 in all seriousness, this wormbeast horror-mom was inspired by the awesome body horror work of Anjilla Ulfhednar. Check out her Instagram account. 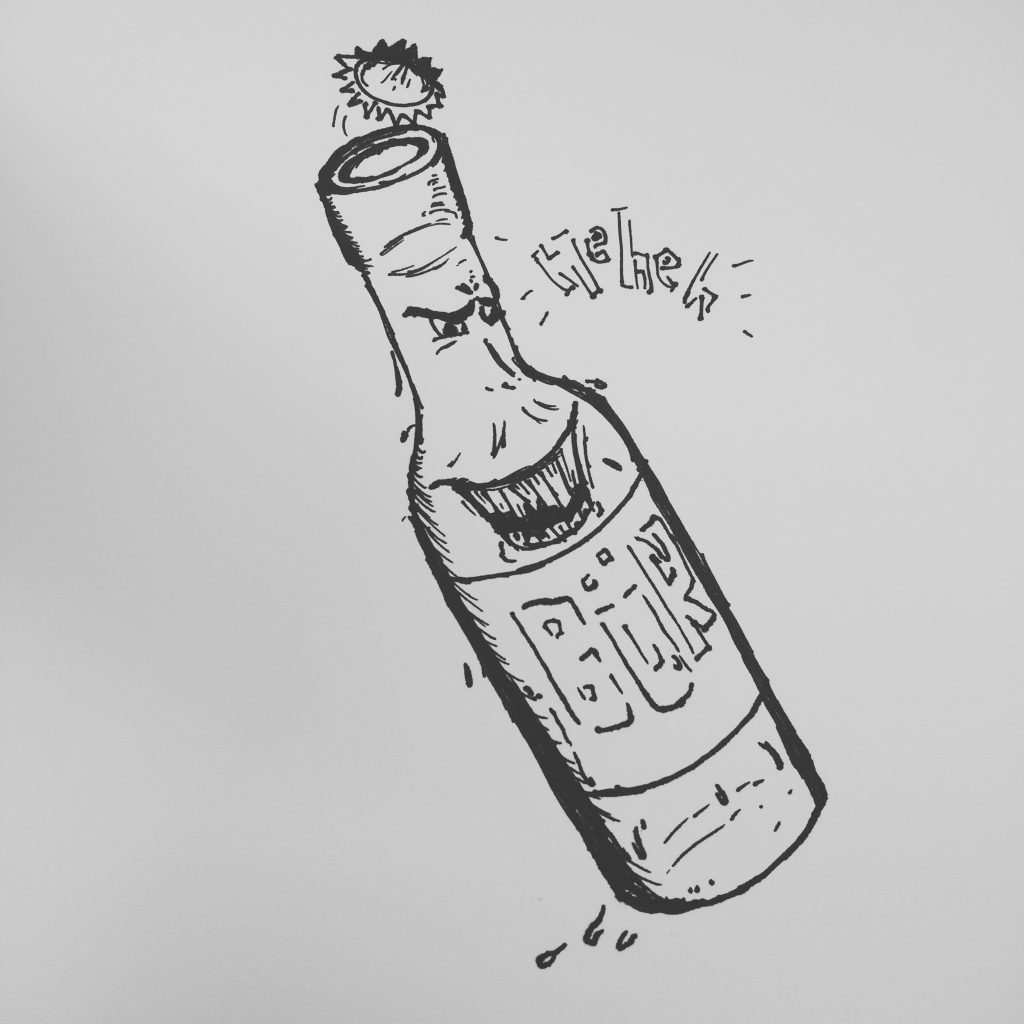 Inktober 2018, Day 18
Title: Nice Paycheck… Would Be a Shame if Something Happened To It
Prompt: “Bottle”
Medium: Ultrafine Sharpie and Strathmore sketchbook

Now THIS… this is getting to be more like it. The perspective is weird and skewed, sort of like I had already drank several BURs already before drawing it. However the heinous, dirty-toothed smile of the evil beverage is almost exactly what I had in mind. 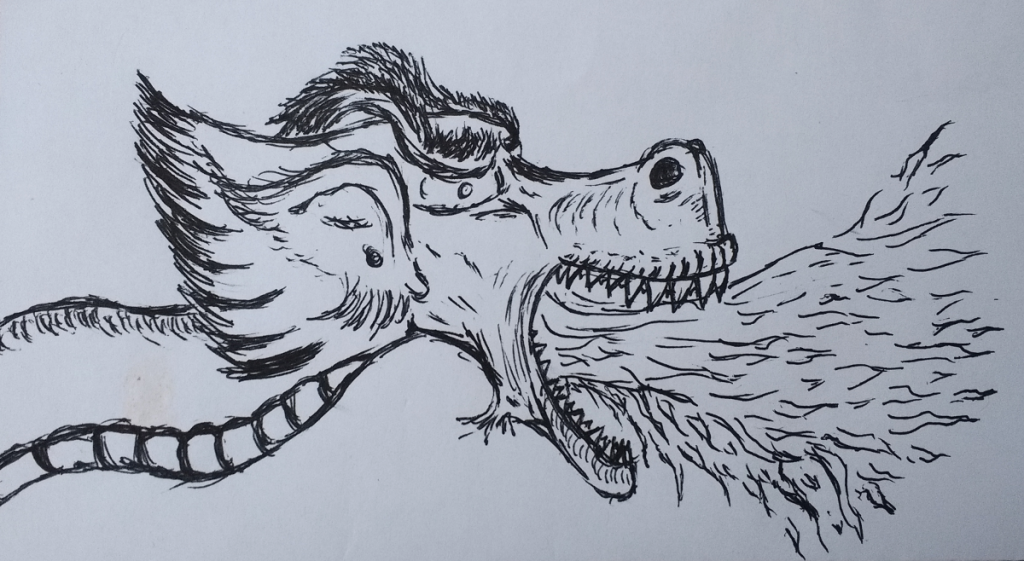 Inktober 2018, Day 19
Title: Lucky
Prompt: “Scorched”
Medium: Pilot Ballpoint and The Back of a Character Sheet

Just a little something I whipped up while waiting for my group to level in my D&D 5e session. A little flat, but I like the detail.

Back in the comfort of my sketchbook, I channeled the idea that a broken nose and a broken smile were nothing compared to… a broken heart. 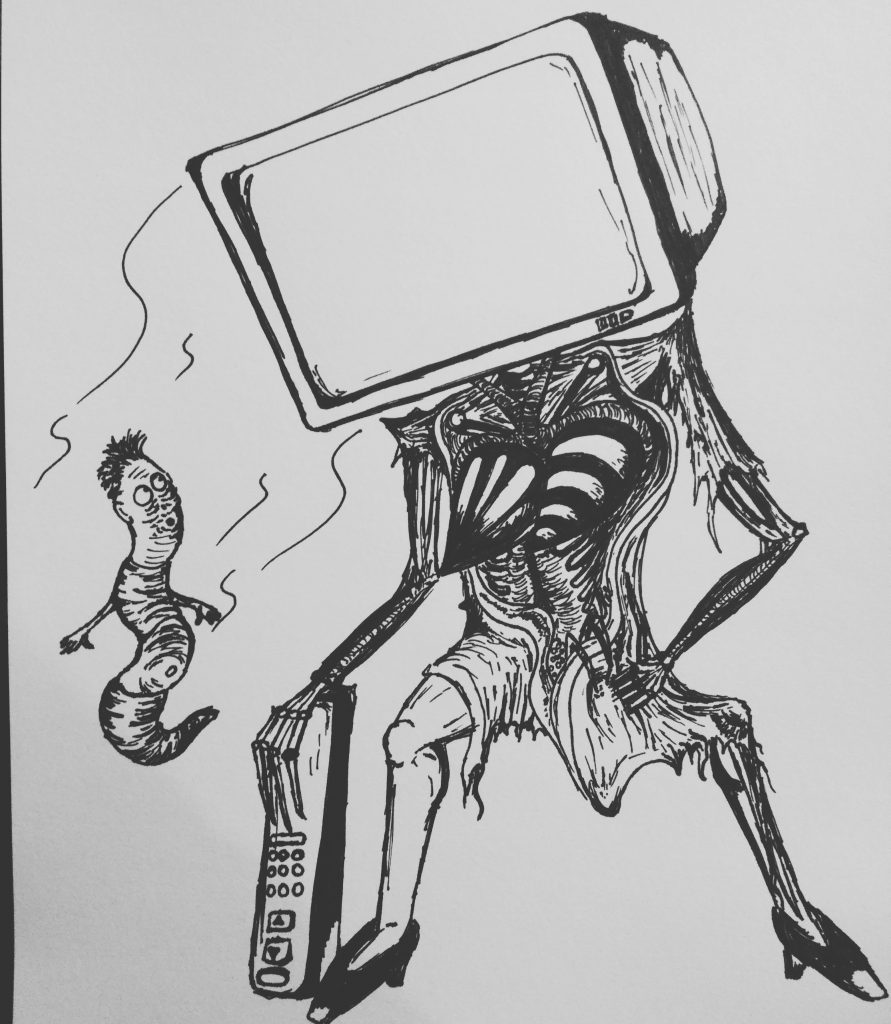 Oh. OH. Uhhhh, I drew this during an all-night binge of Daredevil, Season 3. (It’s really good, by the way.) Guess maybe I’ve been watching a little too much Netflix lately. 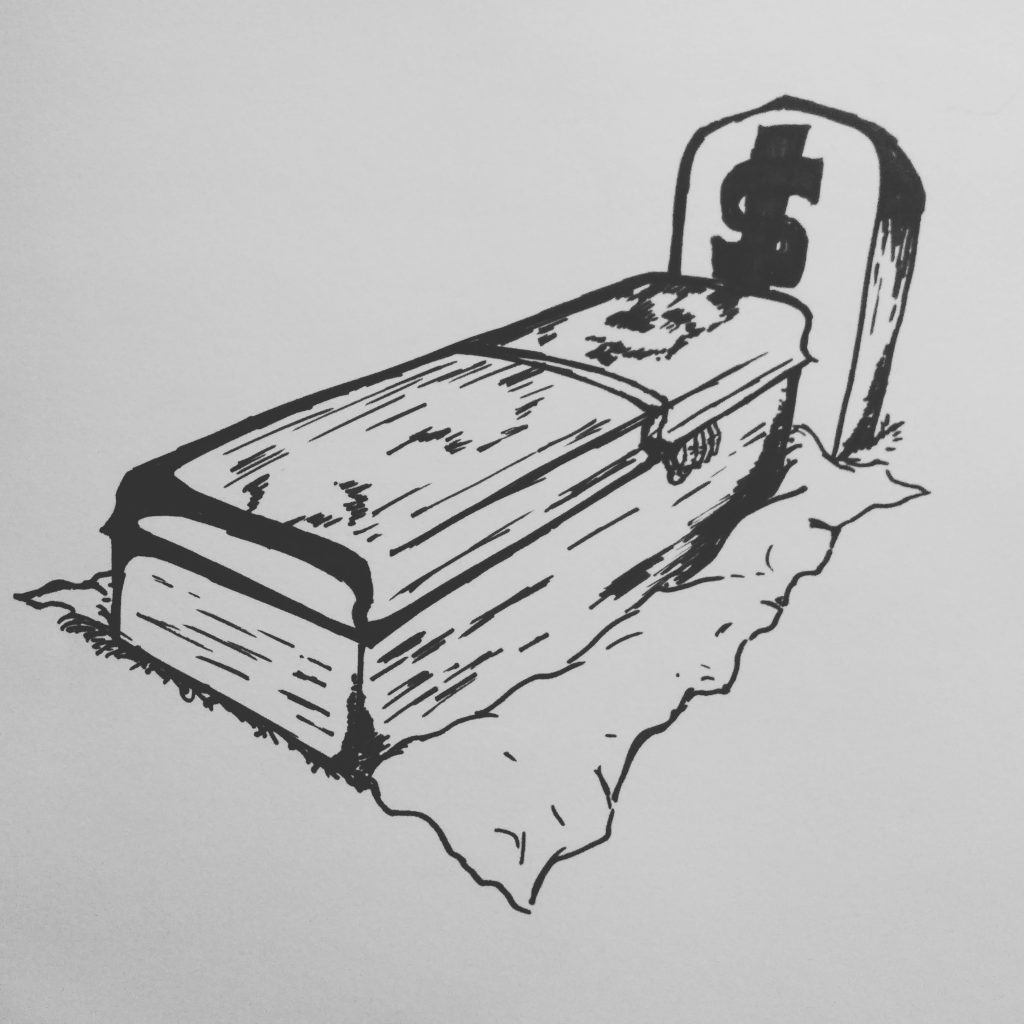 Playing around with a standard fine tip Sharpie actually gave some good results. I’m kinda proud of this one: it really represents the idea of inevitability. Plus, the perspectives and linework are a bit improved. 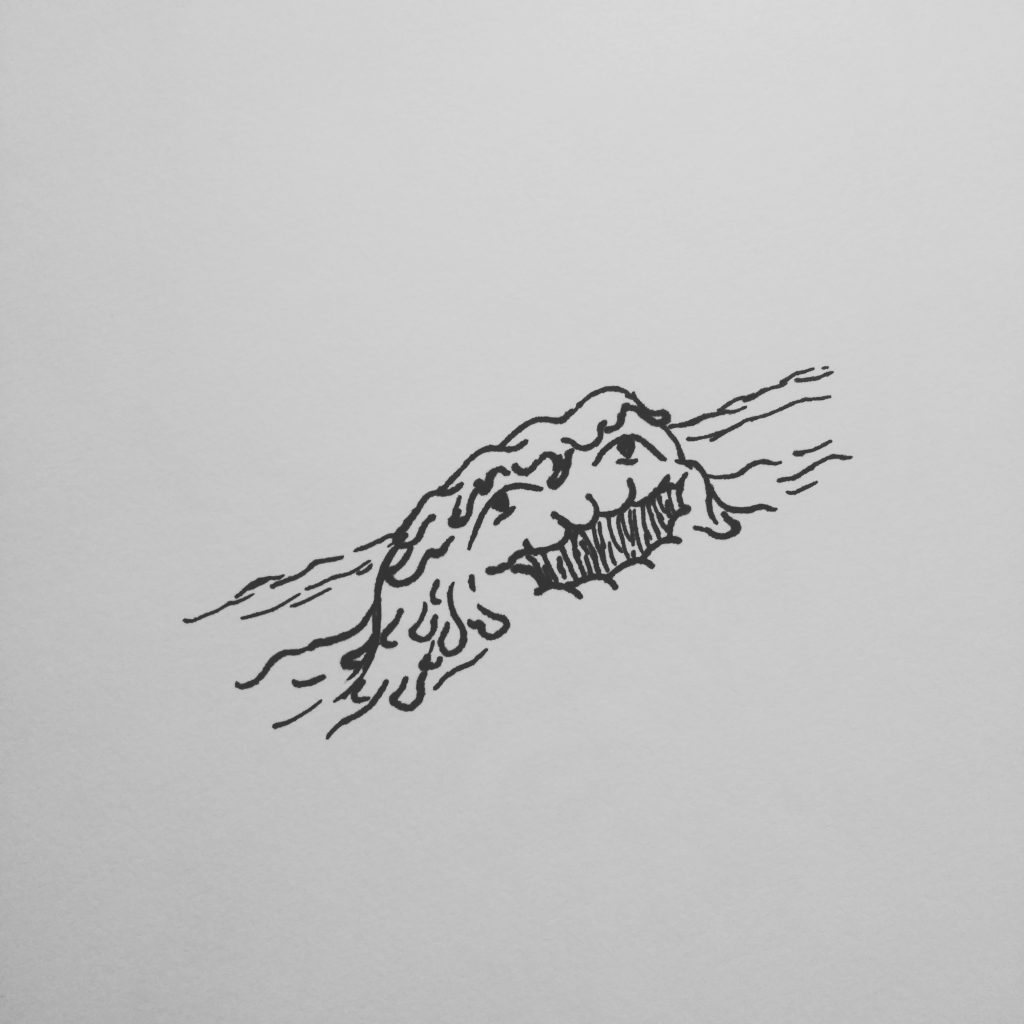 I needed to cleanse my brain of nightmare fuel so I went to my happy place – with fluffy thoughts of Dragon Quest and its adorable iconic slimes. Here’s my take, at least. Some of the lines are a little sloppy, but I was encouraged enough to finish out the month-long challenge…

Tell Me – Is This Progress?

After looking back over the last ten days or so of new sketches and double checking my feeble efforts in Part 1, I think I can say yes! What do you think? Shoot me a comment down below, or submit your own stuff for inclusion in my conclusion! See you all on I Can’t Draw, Part 3 – coming next week!