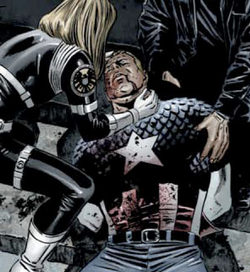 Diamond Comics Distributors, the folks who distribute every comic book in the U.S. of A., released the top-selling comics of 2007, and man oh man, was everybody glad to see that self-righteous dickweed Captain America get hisass shot. Captain America #25 was the best-selling comic in America last year, followed by nine other Marvel titles ranging from the Civil War nonsense to the Dark Tower comics.

In fact, Marvel kicked D.C’s ass all over 2007, so much so that it’s kind of just mean. Although Marvel had 40% of the U.S. comic market compared to D.C.’s 32%, Marvel had 75 out of the Top 100 comics of the year, according to Diamond’s sales figures. Newsarama compares that to last year’s Top 100, which consisted entirely of 53 Marvel titles and 47 D.C. titles. And this is despite the fact that in the past few years, Spider-man has both eaten a vampire’s face and made a deal with the devil to get rid of his supermodel wife. D.C., what the hell is going on over there?

To see the full Top 100, check it out at Newsarama here.