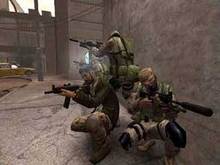 28-year-old Paxton Galvanek rescued two people from a flipped SUV on the North Carolina highways. The two were wounded and bleeding, but as Yahoo! reports…

As the first one on the scene, Galvanek safely removed both individuals from the smoking vehicle and properly assessed and treated their wounds, which included bruises, scrapes, head trauma and the loss of two fingers.

But Galvanak isn’t just a good Samaritan, he’s a nerd, because the only reason he was able to perform medical care on the two individuals is because he played a medic in the America’s Army team-shooter PC game, which actually requires players to sit through medical tutorials before playing.

So take that, video game-haters! This “professional murder simulator” just happens to also be a professional life-saving simulator! Video games save lives! Even games that are barely-concealed recruitment tools and sound incredibly boring if they require you to set through lectures before killing bad guys!