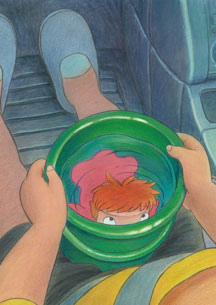 1) Hellboy and Pan’s Labyrinth director Guillermo del Toro is in talks to direct The Hobbit movie, or movies, if they decide on doing two. It’s not confirmed. They’re just talking about it. Peter Jackson, apparently, if far too busy swimming in his giant vault of New Zealand-money, Scrooge MacDuck-style.

2) Sam Raimi is developing a live-action TV series based on Terry Goodkind’s Sword of Truth fantasy novels. Nothing’s been decided yet, although he’s partnering with ABC in developing it. It could all fall apart. Like all overly long fantasy novel series, the Sword of Truth has fans, although they should realize this will almost certainly be more like Xena than Battlestar Galactica.

3) “God of anime” Hayao Miyazaki’s next film, Ponyo on a Cliff, will be released in Japan in July. This is not news because he previously knew it was being released in summer, and summer includes July. Also, watch where you step, Ponyo! You’re on a cliff, dammit!