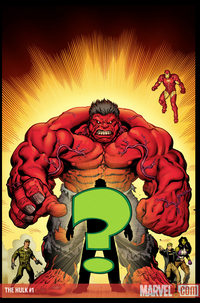 Fresh off of Spidey’s deal with devil, Jeph Loeb and Ed McGuinness’ new Hulk series has come out, and…yeah. The Hulk is red. He also might not be Bruce Banner. And someone’s dead. Actually, I have have no idea what the hell is going on. Jeph Loeb did a podcast on Marvel, which had this awesome quote, which I’m taking fully out of context:

I’d like to bitch up a mad storm about this, but frankly, there could be a second hulk, or this could be an alien, a robot, or an alien robot; it could even be some new mutation phase from the Hulk’s gamma radiation, and (while that would be a crappy, sensationalizing cop-out) it would not break the “reality” of the Hulk series. Spider-man making a deal with the devil? Still dumb as shit.