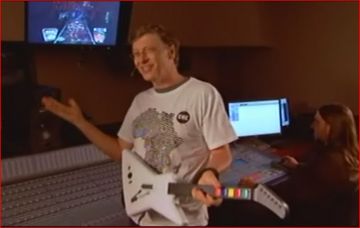 The least rocking man in America (maybe second next to Dick Cheney) was caught playing Guitar Hero during his C.E.S. keynote speech last night. He was joined by Slash of Velvet Revolver, n?e Guns n’ Roses. Slash and Bill Gates, together, rocking. If that’s not a reason to break out the gin at 10:30 this morning, well… (Via Kotaku)

? The Queen Plays With Her Son’s Wii

(Sorry. Couldn’t resist.) Anyways, the incredibly disreputable English paper The People says Prince William was playing with his Wii (sorry) when the Queen Mum saw him, got interested, and decided to join in (still sorry). Supposedly her highness partook in Wii Bowling. This is probably not true, but I think we can all agree to pretend it is. (via Destructoid)

Weirdest after the jump… 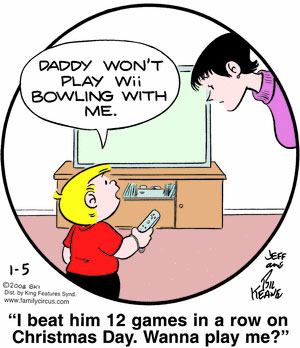 So Saturday, the fantastically unfunny comic strip The Family Circus decided to get topical for the first time in its 40+ year history, and mentioned the Wii, as you can see above. Thankfully, no humor was created by the reference, although it did break the cartoon’s long-standing tradition of having absolutely zero relevance to anything. This makes me incredibly angry, although I can’t really explain why. (Via Kotaku)

(Total side note: I’ve read maybe 10 Family Circus cartoons in the last eight or so years, but I can’t remember seeing baby P.J. in any of them. Is the baby dead? Is the rest of the family denying this? Or are they somehow responsible?) ? Rob