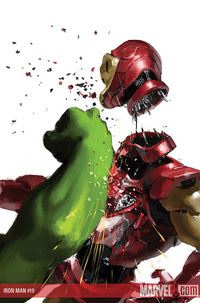 This had been rumored a little while ago, but that devious William Hurt blew it wide open when grilled by the merciless quasi-journalists of MTV News this past weekend. Anyways, Marvel is double-packing its super heroes films, meaning various Marvel Super Heroes will cameo in Marvel’s 2008 flicks (and beyond, one assumes). First up, Iron Man in Hulk 2:

I have a scene with Iron Man, with Robert Downey Jr.,” the Oscar-winning actor [Hurt] told MTV News Friday at the Sundance Film Festival. “It’s a funky scene.”

Then in Iron Man, Sam Jackson stops by as Nick Fury, Agent of SHIELD. Many nerds, excited well past the point of arousal, speculate this is laying the ground-work for an Avengers movie, but more likely it’s just an easy way to put a free commercial in for the next movie on the Marvel slate. Although an Avengers movie certainly wouldn’t hurt my feelings, especially if it were based on The Ultimates.