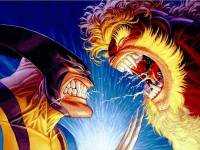 Not content with ice-skating Kiwis, X-Men hero Wolverine also hates Liev Schreiber for starring in his upcoming X-Men Origins: Wolverine movie. Sources had recently linked Schrieber to the far more sensible role of the young William Stryker (played by Brian Cox in X-Men 2), but now the word is Schreiber’s going to play Wolverine’s arch-enemy Sabretooth (played by ex-wrestler Tyler Mane in the first X-Men). Wolverine and Sabretooth have had a long, repetitive history of beating the shit out of each other in the comics and not much else (also I believe they are also occasionally brothers, as well as father and son, thanks to Marvel comics’ continuity), so it seems a little wasteful to hire even a B-level celebrity to play someone…well, that an ex-wrestler would do just fine for. Still, I’d happily pay $8 to see Hugh Jackman and Liev Schreiber simultaneously disembowel each other.