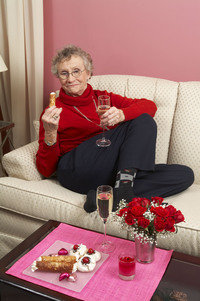 It’s a phenomenon that occurs more frequently than I’d like. While flipping through channels at my usual supersonic clip, all of a sudden my fingers become paralyzed and for some odd reason I find myself totally incapable of moving on to the next station. My every instinct tells me what I’m watching is shameful and wrong, but with each passing second I only become more transfixed.

None of them are ever shows I’d go out of my way to watch, but each one instantly sinks its teeth into me like I’m Samuel L. in Deep Blue Sea. Below are the five most frequent offenders.

Watching a scrawny male dancer try out for the wrestling squad or a fat girl vie for a spot on the soccer team always sounds like it should be entertaining. And it absolutely is!

As MTV’s documentary crew follows some hapless teen attempting to become their own bizzaro-world doppelganger, you can’t help but simultaneously admire their moxie and mock the foolish bravado. ?Aw, the overweight uggo wants to be a model,? you’ll think to yourself as you place the remote control on your belly for safekeeping. One hour later her failure is your gain, and missing a trip to the gym while you watched it all unfold somehow seems only a minor letdown compared to the colossal disappointment you just witnessed on screen.

Sure, it’s critically acclaimed, but if you’re a guy, there’s really not much of an excuse other than the cop out of ?my girlfriend makes me watch.? The problem is, the girlfriend isn’t always around, and with TBS airing reruns pretty much around the clock, the math isn’t in your favor.

There are few things as embarrassing as chiming into a conversation among female coworkers to point out that ?Carrie totally treated Aidan like shit? and then realizing a couple of the guys from your basketball team are within earshot.

Despite Wilmer Valderrama being a major douchebag, or maybe because of it, Yo Momma has a freak show quality that keeps you glued to the authentic street sets and rapid fire disses from start to finish. There’s a certain dignity in seeing a grown man pull a giant rolled up towel with a string hanging off it from his coat and declare that ?yo momma forgot her tampon.? Whether or not it’s feasible for a vagina to be that big is totally irrelevant as the spectators erupt in a series of ?oh snaps? and ?oh no he di’ints? that drown out the stunned opponent’s stammered retort.

The saddest moment comes when you realize your knuckle has somehow made its way toward your mouth and you are about to bite down in approval of a particularly harsh burn.

This one should be prefaced with the fact that there’s absolutely no shame in watching Nick GAS. Alright, maybe a little bit of shame if you actually sit through an entire episode of Figure it Out, but even with Lori Beth Denberg mugging like a fat retard you can always rationalize it as being solely for the nostalgia. The same would be true for Nick Arcade if not for its unfortunate time slot.

Airing at 1:00 and 1:30 in the morning, there’s very little rationalizing you can do to convince yourself that seeing if the Red Team can help Mikey avoid Silly the Kid is more important than getting enough sleep to be functional at work the next day. Also, since the number of teams that actually defeated one of the three alternating villains inside the video game could probably be counted on one hand, you’re basically just sacrificing tomorrow’s productivity so you can listen to Phil Moore perform inane raps to the same tune over and over again.