So I get this in the ol’ TR mailbag yesterday: 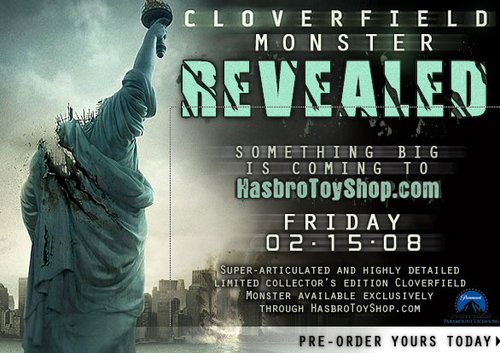 Seriously. As if, in fact, Cloverfield didn’t come out a month ago and make $76 million at the box office, ensuring that many, many people 1) know exactly what the monster looks like, and 2) know that Hasbro couldn’t possibly reveal something a month after a movie came out. At any rate, the monster toy has been “revealed” (see it here) and it looks all right. It does seems to have a loot of good points, including:

But I’m still confused, because the toy won’t be available until September 2008, a little after the movie’s release. And I have no idea who would have let their child see Cloverfield, given the fact that it’s PG-13, plus a woman literally exploded on screen (it was awesome), causing them to want the toy. But that’s probably why I don’t work at Hasbro.