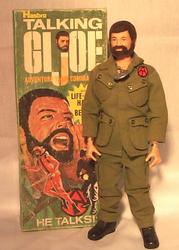 I saw this bit of news over the weekend, and I was genuinely excited that someone was going to be making cool 12-inch figures of G.I. Joe…until I quickly remembered that Hasbro has actually been making 12-inch G.I. Joe toys since the ’60s. So what the hell is this? Is it just for the Joe vs. Cobra characters? Are they r-making the old ’60s Joes? Either way, why the hell isn’t Hasbro making them? Are they given up on 12-inch? Have they realized the only people buying G.I. Joe toys nowadays are the collectors?

Sideshow and Hasbro have refused to clarify anything until the N.Y. Toy Fair in two weeks, so we’re left wondering, and forces to start wild rumors. My guess: someone at Sideshow got someone at Hasbro very drunk, until the Hasbro guy lost the 12-inch Joe rights in a game of beer pong.