What the hell is going on? Next week is the biggest toy event of the year, the New York Toy Fair. Where the hell do these companies get off releasing all this toy news over the weekend? 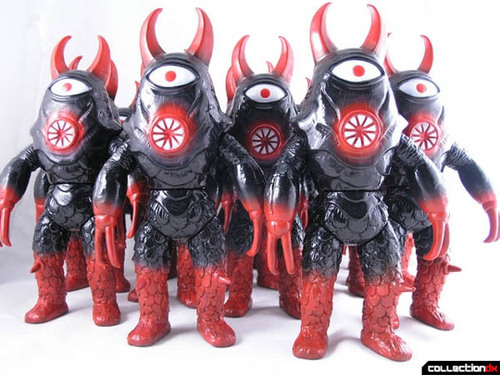 ? The long-awaited first vinyl figure of the cult favorite monster wrestling league Kaiju Big Battel is here, and it’s of perennial bad guy/thing Sky Deviller. Standing 11-inches-tall, it’s the first toy from CollectionDX, who will obviously do quite well for themselves if this is their first.

? This tidbit has finally leaked from the recent UK Toy Fair, but apparently Hasbro will be making Marvel Transformers, much like their recent Star Wars Transformers. These are not to be confused with the super-terrible Meta-Morphs Toy Biz put out a few years ago. The word is the first three will be Iron Man/Jet, Hulk/Tank and Venom/Jeep. A jeep? Really?

? Man, those Nazis just can’t catch a break! Lego has announced that there won’t be any Nazis in the upcoming Lego Indiana Jones video game, but instead “an anonymous genocidal, occultist, trenchcoat-wearing master-race.” Which has made me realize that the bad guys in the recently released actual Indiana Jones Legos are generic Nazi-esque bad guys as well. Now, I hate Nazis as much as the next guy, but c’mon?if you can show kids Nazis in the Indiana Jones movies, why not the game? What the hell is the difference here?