Okay. Now the amount of toy news coming out before the New York Toy Fair is starting to piss me off. 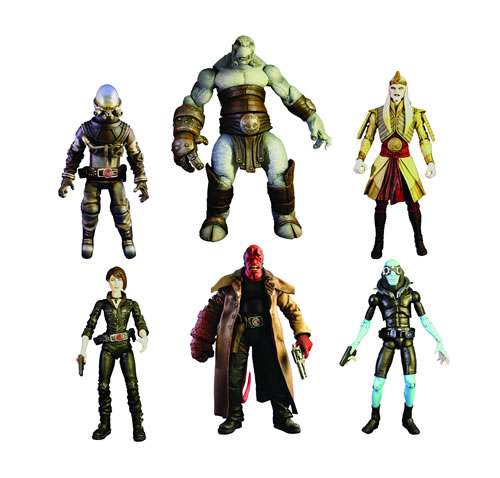 ? Mezco has released pics of its figures from the Hellboy 2: The Golden Army movie, due this summer. There’s Hellboy (natch), the first figure of Selma Blair as pyro Liz Sherman, another Abe Sapien (this time acted and voiced by creature-acting-genius Doug Jones! I love Doug Jones!), the first figure of psychic ghost-in-a-suit Johan, and then the elf-prince Nuada and his troll bodyguard, Wink.

? I believe toymaker JAKKS Pacific just got slammed in the skull with a metal folding chair, metaphorically speaking. JAKKS has made all the WWE figures for years now, but the WWE just announced the license is going to Mattel. If Mattel can manage to get Randy “Macho Man” Savage to agree to sign a damn likeness contract, all will be right with the world.

? And just in case you thought there might not be enough Marvel Super Heroes products available, Koto?makers of fine Star Wars, Halo and other various PVC statues?has gotten the Marvel license, joining virtually every other company on the planet, and my little brother (he won it in a bar bet, I believe). These statues will be beautiful, accurate and fuck-all expensive.