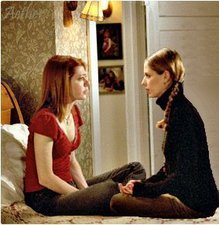 Like most card-carrying nerds, I enjoyed the hell out of the Buffy the Vampire Slayer TV series, and have equally enjoyed the current Season 8 comic from Dark Horse. Now the New York Times has an article about one of the upcoming issues, and if you’re curious why the NYT is discussing a comic at about issue #12, well…that’s because it has Slayer-on-Slayer action.

Yes, Buffy’s experimenting with the Willow side of life, but not with Willow; instead, she’s hooked up with fellow Slayer Satsu (Whedon assures the Times that Buffy is not gay, just open-minded); rest assured their is no hardcore action in the comic itself (with stakes or otherwise), just the post-coital awkwardness Buffy usually finds herself in. You can also hear from Whedon on the Buffy/Satsu hook-up in the article here, where he also discusses his history of killing lesbians.

This comes so far out of left field, I honestly have now idea how to feel about this, which is seldom the case when I think about lesbianism. Am I impressed at its open-mindedness? Betrayed at its gratuitousness? Aroused at the lesbian-ness? Damn you, Whedon!