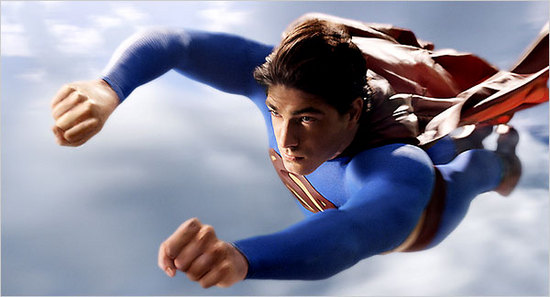 ? You know why Superman Returns sucked? Because it was a weird, slavishly devoted love paean to the ’70s Superman films, which were incredibly goofy, because they were filmed in the ’70s. Wacky Clack and Lois hijinks? Check. Wacky female sidekick for Lex Luthor? Check. Wackiness in every scene, as opposed to any kind of awesomeness? Check. Other than the plane scene, Superman did nothing particularly super or cool during the entirety of the movie. So the announcement that there’s going to be a sequel called Superman: The Man of Steel, directed by Bryan Singer, impresses me not a bit. Did Warner Bros. not lose enough morney on the first one? Can’t they just make a bonfire of cash in one of the back lots and save everyone some time?

? Seriously?Warner Bros. clearly hates money, because the new rumor circulating about the semi-back-on-track Justice League film is that it will be sans Superman and Batman. Yeah, that’ll work. Apparently, Superman will be dead and Batman will be kicked out, and the Wonder Woman and the second-tier heroes will have to save the world from something-or-other. Seriously, guys?money fire. You can roast some marshmallows.

? And in ridiculous Marvel movie news, apparently Ed Norton?who, you might recall, took it upon himself to rewrite The Incredible Hulk script after no one asked?is throwing a hissy fit about the final cut of the film, which Marvel would like to tweak themselves. If Norton refuses to do any publicity for the movie, this is the reason.