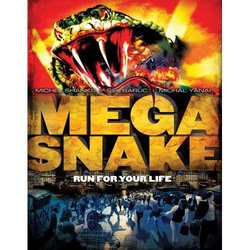 ? The Hogfather
Based on the Terry Pratchett novel. Is this any good? Can anyone tell me?

? Doctor Who Episodes 81 and 104
Two separate DVDs that I refuse to give separate listings. The former is “Planet of evil,” the latter is “Destiny of the Daleks.”

? Blood+ Part One
Did you like the original Blood anime? Well, this removes the cool bits and adds in a lot of angst-y nonsense.

? MEGA SNAKE
Oh my god. Please enjoy this Amazon description of this movie:

Because his father was killed by a poisonous snake bite, Les Daniels has a deadly fear of snakes. Chaos ensues when Les? brother accidentally unleashes a rare, extremely deadly mythical snake. The snake escapes into Les? small town and begins to grow at a terrifying rate. Now Les must overcome his paralyzing fear to help protect his small town against the growing, deadly MEGASNAKE, which is devouring anything in its path.

Greatest movie ever? Quite possibly.