I’m dead serious. Don’t worry, it’ll be fine?see, the government has ordered “science” to have replaceable, thought-controlled limbs ready within four years…which, to nerds like you and me, means ROBO-HANDS LIKE IN STAR WARS. Reports DefenseTech.org: 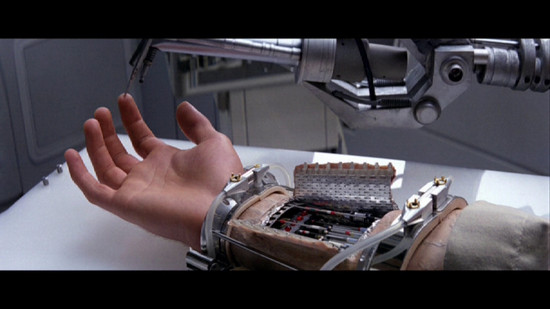 Darpa, the Pentagon’s blue-sky research division, now wants to ratchet that work up about ten notches, by developing a “neurally controlled artificial limb that will restore full motor and sensory capability to upper extremity amputee patients. This revolutionary prosthesis will be controlled, feel, look and perform like the native limb.”

The limb would have to be wired directly into the peripheral nervous system, instead of the brain-controlled arms being demonstrated today, Darpa tells researchers interested in working on this “Revolutionizing Prosthetics” project. Under agency guidelines, the arm will need enough finesse to pick up a raisin or to write in longhand. It needs to be sensitive enough for the wearer to handle day-to-day tasks in the dark. And the limb will have to be strong enough to lift 60 pounds at a time.

These are beyond ambitious goals, and even the even the big thinkers at Darpa acknowledge it. Breakthrough research in “neural control, sensory input, advanced mechanics and actuators, and prosthesis design and integration” will all be needed, the agency says in a call for proposals. Neuroscientists, roboticists, engineers, occupational therapists, and surgeons in the neural, orthopedic, reconstructive subspecialties will have to chip in.

I’ve got a good feeling about this, so I think I’m going to saw off my hand later today, just to be ready. Who’s with me?