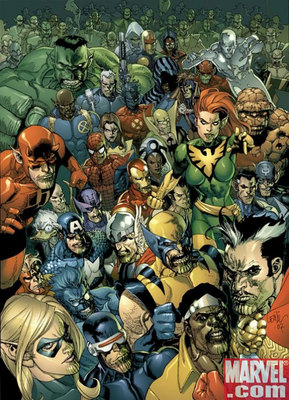 Goodness gracious! If you were drunk like myself on Friday night, you might have missed the most interesting story in comics?and I’m certainly not talking about Spider-man or Batman. Some brave/foolish soul calling himself “marvel-b0y,” who calimed to be an intern working at Marvel, posted a livejournal complete with a few spoilers about the upcoming Secret Invasion mega-story and Captain America. The spoilers themselves are actually incredibly lame (and they’re after the jump), but man, have comics fans freaked out wondering if “marvel-b0y” is real or not, or some crappy viral marketing stunt. The “b0y” also railed against Marvel in general and some writers in particular (*cough* Bendis *cough*), then Marvel sent him a cease-and-desist letter (on adorable Marvel stationary!) and both Bendis and Matt Fraccion railed against him. Finally, “marvel-b0y” deleted his livejournal, but not before mocking those at Marvel for not being able to figure out who he was/is.

Although the spoilers are totally worthless, and thus would imply that is is a controlled leak by Marvel to drum up interest in Secret Invasion, I personally kind of doubt it. Like D.C., Marvel hates when anyone in its industry criticizes them, and demand that its workers toe the company line at all times. Frankly, “marvel-b0y” was too critical of some of Marvel’s shenanigans to be authorized, in my opinion. Anyways, the (crap) spoilers after the jump.